Cuisine of Nazareth for gourmets. Places for dinner - best restaurants 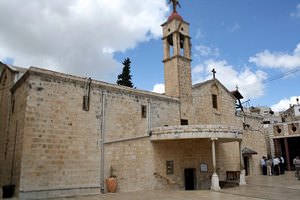 Guests of Nazareth will have the opportunity to appreciate the features of traditional Israeli cuisine famous for the diversity of dishes. The main products used in local gastronomy are seasonal vegetables and fruits, fresh herbs, as well as dairy products and soy. Due attention is also given to the preparation of meat and fish, and the most popular dish of this category is forshmak. It is prepared from salted fish finely chopped and baked with sour cream and potatoes. Such an original casserole is an everyday appetizer for the townspeople. They began to prepare forshmak hundreds of years ago.
Family holidays with kids in Nazareth. How to entertain your child, things to show to children.
Nazareth is a city primarily associated with a central figure in Christianity because it was here where Jesus Christ was conceived, according to religion. The city has a great many religious …

Open
At restaurants that serve regional cuisine, you can try original dishes from vegetables and legumes. An unusual treat is “Tzimmes”, a sweet stew prepared with no fruit or sweet ingredients. They cook it from vegetables and legumes, the most common components are carrots, chickpeas, and beans. Speaking of traditional cuisine, it is worth noting the variety of sweet and savory pastries. You can try puff pastry pies at restaurants of any level. The most original type of pastry is Jachnun - small sweet rolls made of puff pastry.
The formation of local cuisine was greatly influenced by the Arabian traditions. A vivid reminder of this is the popular appetizer "hummus" made from mashed potatoes and chickpeas. To make this paste more savory, they also add a little garlic and lemon juice. Hummus is usually served with small tortillas made from beans or chickpeas. Nazareth restaurants also offer their guests original fish dishes. It is noteworthy that in local gastronomy it is customary to cook only those types of fish that have scales. Such an unusual tradition originated under the influence of religious canons. Copyright www.orangesmile.com
Authentic traditions, festivals and lifestyle of Nazareth inhabitants
Nazareth is a major religious center whose shrines are annually visited by thousands of pilgrims from around the world. This feature could not but affect the life of the townspeople and …

Open
Of particular interest to gourmets are restaurants that adhere to kashrut - a set of ancient Jewish laws that define cooking traditions. According to these rules, it's not allowed to mix meat and milk, they must also be served separately. The ancient traditions of cooking have many interesting features. 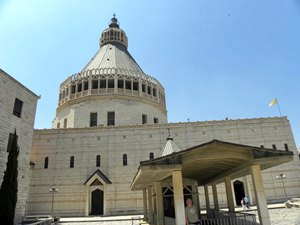 Among Nazareth restaurants where you can try traditional Israeli meals, Rosemary stands out. It is housed in a beautiful historic building where old hall decoration and antiques have been preserved. Its guests can enjoy traditional snacks, hearty meat dishes, as well as Mediterranean-style fish and salads. In addition to an extensive menu, this restaurant also has a rich wine list.
Excursion over cultural sights of Nazareth - 'must visit' points of interest
The main attractions of Nazareth are religious shrines, among which a special place is occupied by the Basilica of the Annunciation. According to legend, the basilica was built in the very …

Open
Another historic building houses the family-run restaurant-bar Villa Nazareth whose menu also consists of traditional Israeli dishes. Since its founding, this restaurant has been managed by one family. Here you can try original dishes prepared according to old home-style recipes. The menu also contains popular Lebanese and Middle Eastern dishes. Meat cooked over an open fire and traditional appetizers deserve the highest praise. 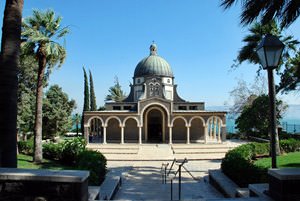 Almahdi Sweets is a stylish cafe where they serve popular Middle Eastern dishes. Those having a sweet tooth will love the cafe for lots of wonderful desserts, as well as various types of coffee. For the high quality of food, the cafe has received many high awards, which does not prevent it from maintaining prices at an affordable level.
Your active city break in Nazareth. Attractions, recreation and entertainment - best places to spend your day and night here
Although Nazareth cannot offer a variety of entertainment centers and amusement parks, besides regular tours, its guests can diversify their holidays with other activities. One of its …

Open
Khazen restaurant is popular with budget tourists, attracting them with a variety of dishes and a cozy home-like setting. Here you can try popular local fast food, including falafel, as well as order fresh vegetable salads and snacks. The restaurant serves simple dishes from seasonal products so it is pretty affordable. 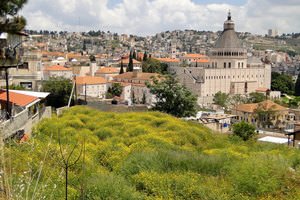 Fans of unusual places will like Tishreen 2 located on the top level of one of the city's highest buildings. It serves original Middle Eastern and Mediterranean cuisines in a modern style. Connoisseurs of fusion cooking will love the restaurant for sure. It can be a great place for a romantic dinner or evening rest in an original setting. Among other things, the restaurant's hall offers a stunning view of the city.
Advices to travellers: what you should know while being in Nazareth
1. The entire territory of the historic district is now fully pedestrian. It is banned for cars and even public transport, so you can explore the Old Town only on foot. 2. Traditions in …

Open
One of the most popular cafes in town is Mahroum where you can try dozens of types of Middle Eastern sweets. Desserts are always fresh and incredibly tasty here. Many of them are available for take-away. There are also suitable sweets for vegetarians.

This guide to cuisine and restauraunt in Nazareth is protected by the copyright law. You can re-publish this content with mandatory attribution: direct and active hyperlink to www.orangesmile.com.
Nazareth - guide chapters 1 2 3 4 5 6 7

Searching where to eat - restaurants and cafe on Nazareth map

Cuisine and restaurants in the neighbours of Nazareth

Haifa
Fans of meat treats like the Meat In and Out restaurant featuring a sumptuous menu and stylish interior decoration. There are many grilled specialties in Meat In and Out; among the variety of treats regulars point out barbecued steak. The Voila specializes in European dishes; it is one of the most popular dining places in the city. The restaurant features a large selection ... Open »
Netanya
Exquisite seafood is available for tasting in Jacko Restaurant. Its chefs are especially good at grilling shrimps and fish. Many interesting dishes are prepared here from mullet and other rare types of fish. Fish meals are often served with freshly baked focaccia and seasonal vegetables. One of the most unusual restaurants in town is Uzi Hummus attracting visitors not ... Open »
Tel Aviv
One of the best Italian restaurants is Rustico. In the evening, the restaurant always has a pleasant romantic atmosphere; it is an ideal place for intimate candlelight dinner. Exquisite home-made pasta, spicy ravioli and classic Italian salads are cooked by chefs of Rustico. The restaurant also has a decent wine list, in which there would be a suitable drink for every gourmet. ... Open »
Jerusalem
Ima restaurant dedicated to the national cuisine is an equally attractive place. The choice of meat delicacies and delicious side dishes is simply huge here. Prices for food are also very attractive - a complete dinner will cost visitors around 80 shekels. In Jerusalem tourists will find eating places of different culinary trends. Masaryk restaurant is a very famous ... Open »
Amman
Mensaf is another well-known dish which is often prepared on holidays. It is made of lamb, which should be boiled in sour cream, and then served on a table with braised rice. Mensaf will be surely liked by fans of meat dishes. Due to such an unusual method of cooking the lamb becomes surprisingly soft. The dish named Adas is no less popular. The taste of Adas is somewhat like ... Open »
Damascus
Gemini restaurant is a perfect holiday destination for the whole family. Here guests will be offered to taste popular local dishes. In the evening the restaurant is always full of visitors; Gemini is one of the most popular budget institutions of the city. Continue tasting national in the amazing restaurant of Al Khawali. This is the place that attracts its visitors with very ... Open »

Travel notes on best cuisine and restaurants of Nazareth (Israel) on OrangeSmile.com. Famous recipes and traditional dishes and courses in Nazareth restaurants. Where to eat - our recommendations on popular places in Nazareth, where you can taste delicious meal and also spend a good time with your friends.