Cuisine of Melaka for gourmets. Places for dinner - best restaurants 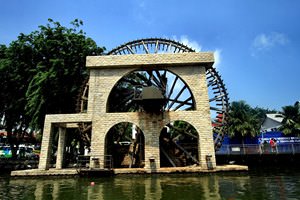 Traditional cuisine of Melaka slightly differs from classical Malaysian. The main treat is rice; skilled chefs cook it in various ways: stewed in coconut milk, stir fried with vegetables, steamed and mixed with fruit for desserts. Of course, there is a lot of interesting treats complementing rice. They are called Lauck, which literally means ‘supplement to rice.’
Advices to travellers: what you should know while being in Melaka
1. It's much more profitable to make an exchange in private exchange offices, as they don't charge a commission unlike banks. Exchange offices can be found literally at any busy tourist …

Open
One of the most popular national treats is satay, small pieces of chicken or beef roasted on an open fire. Satay is usually served with ketupat, steamed rice wrapped in coconut leaves. Malaysian dishes feature a variety of spicy seasonings and sauces; satay is often complemented with spicy peanut sauce.
Locals consider nasi Lemak to be the ideal breakfast; it is also based on rice. Latter is stewed in coconut milk and then served to the table with hard-boiled eggs, anchovies, fresh cucumbers and roasted peanuts. It should be noted that the breakfast is the most important meal for locals, so they always pay much attention to it. Copyright www.orangesmile.com
Guide to Melaka sightseeing - things to see and to visit
The first mention of the Malaysian state of Melaka dates back to 1400 AD. According to one legend, the city of the same name was founded by Sumatran prince; later, smaller settlements began …

Open
Those who want a break from rice have to taste Tahu gorent. It is a mixture of small cubes of soybean meal and soybean sprouts smothered in grounded peanuts and fried; it is served with a spicy sauce. Those who can’t imagine a meal without entrees have to pay attention to laksa Johor soup. This is delicious fish soup with rice noodles. 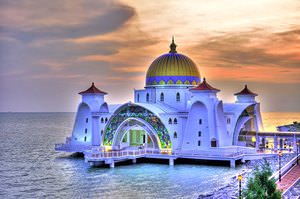 There are also quite complex dishes that you can try only at upscale restaurants. Such treats include rendang, meat stewed in coconut milk. It is cooked for at least two hours; the result of this painstaking work is tender juicy meat with a delicious aroma. The name the most popular dessert speaks for itself. Melaka is an original combination of coconut milk and syrup, which is made from palm sugar. Fans of more European sweets are recommended to taste roti Chan pancakes and delicious murtabak pastry.

This guide to cuisine and restauraunt in Melaka is protected by the copyright law. You can re-publish this content with mandatory attribution: direct and active hyperlink to www.orangesmile.com.
Melaka - guide chapters 1 2 3 4 5 6 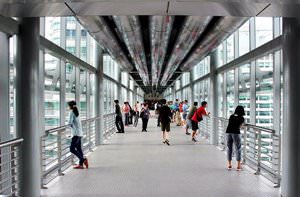 Distance from Melaka center - 122 km.
In the immediate vicinity of the building, there is a picturesque landscaped park with lots of decorations and fountains. Since opening of skyscrapers, a number of people wishing to visit them is so great that some restrictions had to be introduced. Those who want to climb the highest viewing platform of Malaysia have to consider that it is necessary to buy tickets in advance. In addition, the observation platform works differently schedule on different days of the week. It’s recommended to clarify that in advance. … Read further 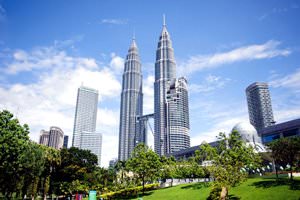 Distance from Melaka center - 121.9 km.
Towers are connected with the Sky Bridge made of glass; it’s located at an altitude of 170 meters. Despite the fact that Petronas Towers aren’t the highest buildings in the world, they have no equal in their category. Those are the highest twin towers in the world, which in appearance resemble two identical huge corn cobs. Skyscrapers are daily visited by more than 300 people, so it’s worth noting that it’s necessary to buy tickets to see the architectural attractions in advance. The number of people who can remain within the walls of a skyscraper at the same time is limited. The most favorite pastime among tourists is walking along the glass bridge and visiting viewing platforms. … Read further 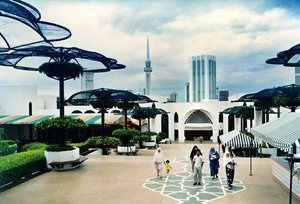 Distance from Melaka center - 121.7 km.
In that interesting modern museum the visitors can see not only the precious historical artefacts but also renewed by modern masters models of the world known Islam remarkable sights. The toy model of Masjid al-Haram mosque, located in Mecca, is exhibited in this museum. Apart from the museum in the building you can also find a restaurant, an interesting bookshop and a souvenir shop. This museum is very popular among tourists. After the museum you can walk in the Botanic Garden. It is an excellent place for a relaxation on a hot day. … Read further

The rich culture of Malaysia has led to a variety of local cuisine. It is a mix of Chinese, Malay, European, and Indian culinary traditions introduced by migrants from different countries. Various spices are widely used here. The national food is typically spicy and always flavorful. Coriander and cumin are popular here. They form the basis of many Malay sauces. Local people also use lemongrass, Kaffir leaves, cardamom, anise, and fenugreek in cooking. … Open 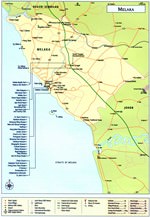 Searching where to eat - restaurants and cafe on Melaka map

Cuisine and restaurants in the neighbours of Melaka

Kuala Lumpur
Local cuisine can be called one of the most diverse in the world. Culinary traditions represent a unique combination of Indian, Chinese, Malaysian and African features. Even a great connoisseur would get lost in a variety of national dishes. Everywhere you can taste the traditional curry and chicken, delicious fish and noodles. The most important feedstuff is rice; it is the ... Open »
Johor Bahru
You should order Nasi Dagang for lunch. This is rice that is steamed in coconut milk along with fried coconut pulp, pickles, eggs, and fish curry. This dish is served not only for lunch but also for breakfast and dinner. A dish called bacutte is delicious. It is made from pork ribs, necessarily covered with fat. The ribs are cooked for a long time, ideally for several days. ... Open »
Singapore City
Senso restaurant is located in one of the most beautiful colonial buildings of the city. The restaurant specializes in cooking Italian cuisine. Delicious pasta, pizza and seafood - Italian wine will become an excellent complement to your dish. Curry Favor restaurant is notable for its cozy home-like atmosphere. In the menu of the restaurant you can find widest choice of ... Open »
Batam Island
If you’re looking for European or American cuisine, you can easily find it here on Batam Island, too. There is a wide choice of hamburgers, sushi, Chinese noodles, pizzas, and pasta due to the abundance of tourists. Still, it’s worth trying local cuisine as well. But for you not to have any problems with digestion it’s better to go to the top-class restaurants, local ... Open »
Sumatra
Sweet tooth won't be disappointed with national cuisine too, as a significant part of popular desserts are made of exotic fruits. Fried bananas are very popular among foreign guests; that's the most simple and the most common local treat. At Sumatran markets you can buy a wide variety of fruits, including usual pineapples and bananas, as well as exotic durian and carom. It's ... Open »
Penang
Meat dish fans should try rendang. This treat is considered to be one of the most complex in cooking and sophisticated in its taste. The process of cooking of the dish lasts for about several hours. Small slices of meat are slowly boiled in coconut juice for a couple of hours and get an astonishing taste and flavor by the end of cooking. Local restaurants offer enough of ... Open »

Travel notes on best cuisine and restaurants of Melaka (Malaysia) on OrangeSmile.com. Famous recipes and traditional dishes and courses in Melaka restaurants. Where to eat - our recommendations on popular places in Melaka, where you can taste delicious meal and also spend a good time with your friends.