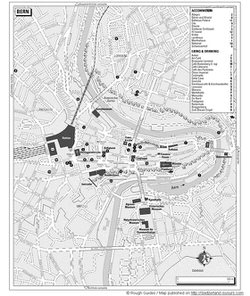 Interactive maps of hiking and biking routes around Bern

1. You can zoom in/out using your mouse wheel, as well as move the map of Bern with your mouse.
2. This interactive map presents two modes: 'Biking Routes' and 'Hiking Routes'. Use the '+' button on the map to switch between them.

This Bern map has two modes: 'Railway Network' and 'Landscape & Rural Map'. Use the '+' button on the map to navigate.

Between sparsely populated points, buses shuttle. They are called postal. Despite the fact that sometimes buses are completely empty, they go on schedule and are ready to deliver even a single passenger to the necessary point of the faraway city. It is possible to book a taxi, even in mountainous areas. At the same time, be prepared for the prices that are quite high. They increase significantly in evenings and on holidays. If you like to travel with keeping everything in your hands, you can rent a car in one of the major cities. Despite the relief, Switzerland has a lot of high-speed trails. First, you have to pay the transport fee, which is about 45 francs. Many choose bicycle rental; moreover, in Geneva and Zurich this service is absolutely free. … Open

Nature and parks of Switzerland

The most famous mountain in this country is the Matterhorn. The mountain is located in the canton of Valais on the border with Italy. The height of the peak is about 4 500 meters above sea level. Matterhorn gained its fame thanks to the tetrahedral pyramidal form. Each slope is directed to one side of the world. There are several routes of ascent; however, even the simplest ones require the maximum concentration. Despite the modern equipment and professional training of climbers, the Matterhorn still is the most deadly alpine peak. The highest point of the Alps is another peak, Dufour, in the canton of Valais. The third highest is the picturesque Jungfrau; it was added to the UNESCO World Heritage List. … Open

Our guide to Bern

A legendary hotel Savoy won’t remain outside the attention of wealthy travelers. There are more than 50 rooms with aristocratic interior based on charming modern furniture and antique works of art. The ground floor of the hotel has a wonderful restaurant that has managed to save atmosphere of yesteryear. Connoisseurs of luxury and spa treatments are sure to enjoy Hotel Ambassador & Spa. In 2013, the hotel … Open

Bern for children - what to visit

For those who like to relax in a quiet, uninhabited environment, it will be nice to visit Northrop Park. It is also well equipped. For the visitors, various sports grounds and picnic areas are prepared, and children will like the playgrounds with a lot of swings and slides. There is a cafe on the territory of the park, which can serve as an ideal place for a family lunch or dinner. This park, despite all its … Open

A striking modern building occupied by Ibis Budget Bern Expo is located opposite the exhibition center of Bern. Interior of rooms is simple and attractive at the same time, mainly due to white space. Each room has a modern bed dressed with in crisp white linen; some family suites have two-level beds. Design of premises is dedicated to nature, so there are accessories of pleasant green color and amazing pictures with … Open

One of the most popular department stores in the city is Globus. It is really great for purchasing new clothes and high-quality Swiss products. In the department store, there are popular children's clothing stores, as well as branded stores offering men's and women's clothing. On the first floor, is a large supermarket where tourists buy fresh cheese, real Swiss chocolate, and ready-made hot dishes, at attractive … Open

Hotels with history of Bern

Near the Bear Pit and other prominent attractions of the old town you can find Hotel Landhaus. This historic mansion offers 10 rooms, the main feature of which is elegant finish of the wood. Each of the rooms has genuine vintage accessories, including stylish furniture, antique vases and suitcases. A restaurant on the ground floor boasts an ample collection of old photographs. Another amazing feature of the hotel is … Open

4. Tourists are recommended to take special Global Refund Cheque receipts when they make purchases. While leaving the city, you will be able to use this receipt to receive a refund of the commission of 7.5% from the total sum of your purchases. 5. In order to rent a car you will need a driver's license of the international standard. The second thing needed is a credit card with the required amount … Open