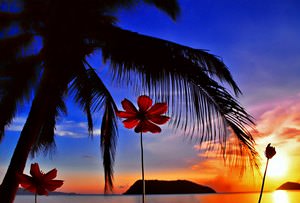 Ko Pha Ngan or Pangan is one of the most visited Thai Islands. It is the second island in size after Koh Samui, it is well known among tourists and bears the title "Asian Ibiza". Despite all this, you should not think that there is nothing to see for those who are interested in architectural rarities and historical attractions. Scientists believe that Koh Pha Ngan was inhabited more than 2 thousand years ago, and since then many valuable buildings have become ruins, but many have survived. Nowadays these remains attract thousands of tourists every year. Basically, these are mostly Buddhist temples.
Best beaches and recreation areas around Ko Pha Ngan Island
The coastline of Koh Pha Ngan is rather large, and therefore a choice of beaches is just huge. One of the busiest and most visited beaches of the island is Haad Rin beach. It’s very …

Open
If you have come to such a place, remember that monks can’t communicate with women and touch them. It is also not necessary to try to climb on any Buddha images or statues in order to take beautiful pictures – it will be considered as a religious insult. However, you should keep in mind that Thais respect many gods of different religions as well as their own. The embodiment of this attitude toward religion is a «Chinese temple» and located between Chaloklum and Thong Sala. The easiest way to get here is to ride on a motorbike.
The Chinese temple, can’t be simply called "temple". It is correct to call it a "temple complex". The fact is that there are dozens of small religious buildings dedicated to a variety of gods of Chinese, Buddhist and Hindu traditions, as well as some magical animals on its territory. The biggest temple is dedicated to Guan Yin, the female incarnation of Buddha. It is considered that the whole complex is called in honour of this goddess. In general, women, children and traders pray to this goddess, but you can find the sanctuary of multi-armed Shiva, the God-warrior Guan Yu, Hottei, Buddha and many others on the territory of the temple. All cult buildings are made in the traditional Thai style and they are very beautiful. Moreover, all of the buildings still function. The temple is crowded during the holidays. Copyright www.orangesmile.com
Top hotels in Ko Pha Ngan Island for business trip or short vacation
Anantara Rasananda resort situated at the charming beach of Thong Nai Pan has remained one of the most famous and sought after hotels of Koh Pha Ngan for many years. The resort offers a …

Open
Wat Phu Khao Noi temple may seem small and not very decorated. However, it is over 130 years old and it is the oldest Buddhist temple on the island. Today, it is an island centre for the study of Vipassana meditation techniques, and farangs can join meditation here because the current priest of the temple speaks English well. The central pagoda of the temple is recognized as a historical artefact and it is very beautiful. Though it is made in an ascetic style, exactly like the surrounding eight buildings. 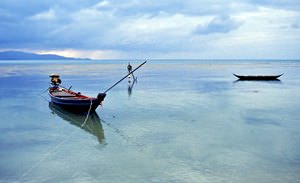 Wat Paa Sang Tham or Saeng Dham Temple is another example that demonstrates Thai love to worship all deities. Presumably, the difference in names may be explained by the fact that Thais don’t speak English well. You can see statues of Buddha, the gods of the Chinese Pantheon, and the gods of the Hindu Pantheon on the territory of the temple. Some of the buildings have not yet been completed and if you want, you can donate some money to complete the buildings. If you share the Buddhist views, you can get permission from the Abbot and temporarily become a novice of the monastery. It is allowed here even for farangs.
Shopping in Ko Pha Ngan Island - main shopping streets, outlets and boutiques
Ko Pha Ngan is a very small island. However, the island has everything you need to relax and have a great time. Of course, if you want to wander around the shops of any major shopping …

Open
There are several very beautiful temples on the island- Wat Samai Kongka, Wat Maduea Wan, Wat Pho & Herbal Sauna, Wat Ampawa and Wat Chaloklum. Many of these religious buildings still function. If you’ve decided to visit some of them, remember that there is a dress code. Men and women should wear clothes, covering knees and shoulders. Those who want to learn all about the daily life of Thais, look at the local huts and buildings in their traditional style, should go to the local small villages where the natives live as they did hundreds of years ago.

In the section below, you can get one of our excursion, activities or city discovery tours over Ko Pha Ngan Island and surroundings. Our website offers 10-30% lower ticket prices, when compared to the offline purchase on the spot.

This guide to cultural sights Ko Pha Ngan Island is protected by the copyright law. You can re-publish this content with mandatory attribution: direct and active hyperlink to www.orangesmile.com.
Ko Pha Ngan Island - guide chapters 1 2 3 4 5 6 7 8 9

Unique spots in Ko Pha Ngan Island and near 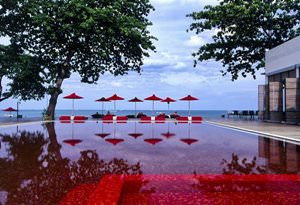 Distance from Ko Pha Ngan Island center - 22.5 km.
The original red pool is available to guests of the Library Hotel on Koh Samui. Not everyone will dare to swim in it. The blood-red color of the pool water is the reason for this. The water gets such a rich and realistic shade because of the red mosaic tiles that cover the bottom and walls of the pool. Even hotel guests who know the secret of this pool do not always risk swimming in it. This pool really looks very unusual against the background of the surrounding exotic landscapes and cute resort environment. … Read further 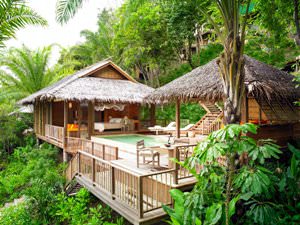 Distance from Ko Pha Ngan Island center - 15.8 km.
Guests who wish to relax on the beach resort can visit the picturesque Thai island of Yao Noi. The island is located between two popular tourist islands - Phuket and Krabi. From these islands you can get to the quiet spa resort less than an hour by motorboat. The territory of the small island is almost entirely dedicated to the chic hotel Six Senses, whose honor the health resort was named. … Read further

Ko Samui
Kho Samui landmarks are mostly unique religious buildings and constructions, nature sites and attractions as well as museums visiting of which will be of great interest to all tourists without exception. One of the most beautiful architectural constructions of the island is the Laem Sor pagoda. Being located on a scenic beach the construction looks just amazing. The main ... Open »
Ko Tao Island
If you decided to visit all the important sites on the island, you should start with Jor Por Ror bay. In the South part of the beach, there is the stone of Rama V, the first King of Thailand, who visited Ko Tao. It happened in relatively recent 1899. On his initiative, the island was inhabited in future. The biggest and the only one museum on the island, which is dedicated ... Open »
Krabi
Not far from it the stairway is located, on which everyone can climb to the top of the hill and appreciate the panorama of the island. The stairway has 1237 steps, so climbing will be a good exercise for the curious traveler. On the island archaeological excavations were held for many years. During that time scientists have found a number of unique artifacts. You can see those ... Open »
Ban Khlong Muang
In the vicinity of Muang, there are several first-class thermal centres, which will also be nice to visit during your holidays. The Saline Hot Spring Khlong Thom complex is one of the largest ones. It offers visitors swimming pools, recreation areas, as well as massage services. The complex is remarkable because it is located on the territory of a beautiful park, so it is ... Open »
Ko Lanta Island
Nevertheless, the present name was given to the island about a century ago in the time of Rama V’s regiment. Well, one of the most peculiar sights here is the Old City. Tradesmen from China and Arab countries had been using the local harbor as a transit point for many centuries so it definitely influenced the local architecture. For instance, the local Old Port reminds ... Open »
Ko Lanta
The port is one of the most interesting places in the Old Town today. You can see local fishermen for their hard work here. There are many small boats in the harbor. They almost do not differ from those that the ancestors of local residents used. Life rarely stops here. Someone goes fishing, someone returns with a catch, someone cuts up the fish or sells seafood on the ... Open »