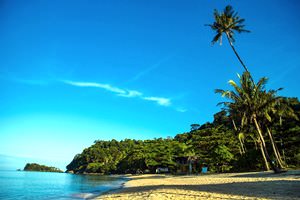 The main attraction of Koh Chang is its nature rich in beautiful waterfalls and rare plants. The must visit site of excursions is Than Mayom Waterfall located on the territory of a very beautiful tropical garden. This natural attraction will appeal to those who are interested in history. The fact is that the waterfall was visited by King Rama V and Rama VII at the turn of the 19th-20th centuries; in memory of those significant events beautiful prints were carved on the stones.
Best beaches and recreation areas around Ko Chang
Koh Chang is the second largest island in Thailand. However, it was able to retain its pristine natural splendor almost completely. A considerable part of island's beaches are quiet and …

Open
Not less famous is the Klong Plu waterfall. It is within walking distance from the popular Khlong Prao Beach. The waterfall is about 20 meters height and the trail leading to it passes through very scenic places. In the southern part of the island there is picturesque Khiri Phet waterfall. Despite the fact that its height is relatively small and is about 5 meters, the waterfall doesn’t yield in beauty its primary competitors.
Near Salak Peth Bay there is also a very beautiful waterfall called Klong Nueng. It is surrounded by very picturesque and extensive forest, which became a favorite holiday destination among fans of hiking. In addition to unique natural attractions, the island is known due to its picturesque fishers’ villages. Bang Bao village is considered the most charming among them. There you can see amazing houses of local fishermen; they are built on massive wooden stilts over the water. Those are real architectural landmarks fully reflecting the culture and traditions of the island. Copyright www.orangesmile.com
Top hotels in Ko Chang for business trip or short vacation
Every hotel on Koh Chang is ready to surprise guests with unusual services or amazing design solutions. The choice of places to stay on the island is very large. The only luxurious hotel on …

Open
There is also a religious shrine on the island; Chao Po Koh Chang has been worshiped by local fishermen for many years. Indigenous people believe that it protects them from inclement weather and gives good luck in business. All those interested can look into the beautiful temple. The important historical landmark is Boriwaen Yutthanavee naval memorial founded in honor of events dating back to 1921. The memorial is located near Salak Peth Bay and is dedicated to the sailors who died during a battle with French colonialists. January 17, 1921, Thonburi boat sank off the coast of the Gulf of Thai, which today is one of the most popular attractions among divers.

This guide to cultural sights Ko Chang is protected by the copyright law. You can re-publish this content with mandatory attribution: direct and active hyperlink to www.orangesmile.com.
Ko Chang - guide chapters 1 2 3 4 5 6 7
Car rental on OrangeSmile.com

Excursions over cultural sights of neighbours of Ko Chang

Pattaya
The main building material is teak wood. The majestic church features plenty of unique decorations, handmade carving and dressing and other elements of décor executed in national style. Even though the decoration of the church is planned to be finished only by 2025 the church is open for visiting of tourists. Close to the church travelers will find the most famous miniature ... Open »
Siem Reap
One of the oldest constructions of the capital is the temple Phnom Bakheng. It was built in 907 and had been an iconic building of the Khmer Empire for many years. The temple is almond-shaped. Travelers have an opportunity to go up and down the stairs and admire the panorama of the surroundings. The temple of Baksei Chamkrong is an interesting place too. Built in 947, it ... Open »
Hua Hin
The must-see sight is the Kaeng Krachan National Park; there is the world famous Pala U Waterfall in its southern part. It is the highest waterfall in the country consisting of 15 levels. It is noteworthy that only travelers with special training can get higher than the third level of the waterfall. A walk through dense jungle will give a lot of impressions. Nearby is ... Open »
Phu Quoc Island
Night market is also a kind of a landmark. Nowhere else in Duong Dong the Vietnamese culture can be seen as well as it is here. It opens its doors at dusk. Cau Castle is another cult building. Built in 1937, it is something between a lighthouse and a sanctuary. The locals pray here to the Goddess of the Sea Thien Hau and bring her the gifts. In a way, the Cau became a symbol ... Open »
Bangkok
Lak Muang Monastery is one of the main religious attraction of this place. It was named in honor of the scared spirit, which, according to the Thai people, protects the city and its inhabitants from harm. The monastery regularly becomes the location for colorful religious festivals and ceremonies, which main goal is to make gifts to the spirit and gain its protection. Wat Arun ... Open »
Phnom Penh
Perhaps, the most symbolic and touching attraction of Phnom Penh is the temple of Wat Phnom. It is located on the hilltop and surrounded by the incredibly enchanting park area. It is possible to see the temple from different districts of the capital. Despite the fact that it is quite difficult to call the temple prominent in terms of architecture, it has an immense historical ... Open »

Culture guide to Ko Chang. Which fascinating sights to visit once you are in Ko Chang: temples, churches, museums, theaters and castles. Recommendations (with addresses, phone numbers and links) on the places 'must visit' in Ko Chang. Plan your own city excursion by using this page info!