Sightseeing in Khujand - what to see. Complete travel guide 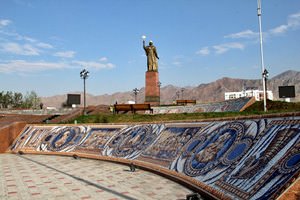 One of the oldest cities in Central Asia, Khujand, is situated in North Tajikistan. Nowadays, this is a large industrial and cultural center of the republic. Khujand is home to representatives of twenty different nations and ethnic groups. Tourists and travelers prefer to visit this Tajik city because Khujand is perfectly suitable for vacationing thanks to a large number of parks, gardens, and various landmarks. Finally, local people are very hospitable.
According to historical data, the city existed yet during the ancient times of the Achaemenid Empire. When Alexander the Great captured this ancient land, he decided to protect his new territory better and renamed the existing settlement to Alexandria Eschate. In the 13th century, the army of Genghis Khan completely destroyed the city. However, Khujand rose from ashes and became a prosperous city again because of its strategic location at the crossing of trading routes. In May 1866, Russian troops captured Khujand. This fact only continued the development of the city.
In 1918, the Soviet Union became the ruling authority in the region. In 1924, the city joined the Uzbek Soviet Socialist Republic. Five years later, the newly formed Tajik Soviet Socialist Republic got Khujand as a part of its territory. This is when the city got a new name – Leninabad. When the war ended, the region started developing actively as an industrial and cultural center. Leninabad became famous abroad as the city exported the goods it was producing. The urban territory was growing from the 60s of the 20th century, and the population of Leninabad was increasing as well. Khujand got its current name in 1991. Copyright www.orangesmile.com
When visiting this Tajik city, tourists usually praise a beautiful architectural complex – the Madrasa and Mausoleum of Sheikh Massalha. This complex consists of a 19th-century minaret, several mosques, and an old cemetery. The gorgeous architectural ensemble was built on the burial site of Sheikh Massalha from the Muslihiddin dynasty. The complex got its name after Sheikh. According to a local legend, the ruler was initially buried in another place, in a neighbor village. However, it was decided to bury the relics of Sheikh Massalha in a bigger settlement and build a mausoleum in his memory. 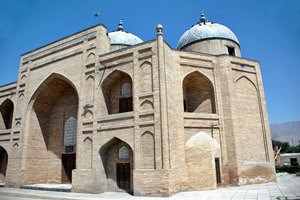 The building was damaged several times during the battles, but it was restored afterward. All building works ended only in the 16th century. The complex was expanded, and so it was not just a mausoleum anymore but a place where people could pray and make rituals. Nowadays, the mausoleum consists of a minaret and a mosque. This is a beautiful two-story building with a giant cupola and a portal-type main entrance. The tomb of the sheikh still stands in the central part of the mausoleum. It has a giant wooden tombstone with floral ornaments.
The Masjidi Jami Mosque is one more sacred landmark of Khujand. It was built in the 16th century. Tourists from all over the world come to the mosque to see this gorgeous example of Central Asian architecture and admire its fabulous décor. When visiting the beautiful complex, visitors usually pay their attention to a hall that has walls on the three sides. The fourth side is an open arched construction with thirty columns. Columns in the middle still have old drawings. 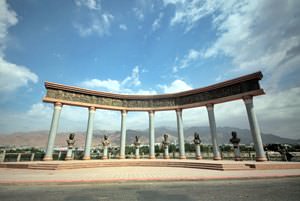 An elegant and fantastically detailed carved décor covers all walls of the mosque. There is a winter hall inside the Masjidi Jami Mosque, and walls in this hall also have intricately carved ornaments. Do you want to look at the panorama of Khujand? In this case, you need to get to the north-eastern part of the shrine and find a minaret with arched passages. This observation point offers a striking view of the city.
Continue your acquaintance with the amazing Tajik city in the Historical Museum of Sughd that exhibits many valuable archaeological findings. The opening of the museum took place more than thirty years ago when the city celebrated its 2,500th anniversary. Visit this establishment to learn more about the history of Khujand during medieval times and how the city looked like in different epochs. The museum exhibits more than one thousand and two hundred artifacts. 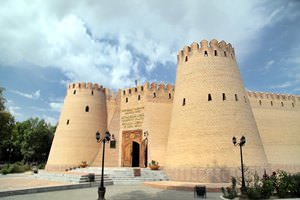 Khujand International Airport is located approximately ten kilometers from the city. It works with many international airlines and accommodates flights from several countries. Tourists can also reach Khujand from Tashkent using a rented car. Some taxis connect the two cities. The road is, however, quite complex and takes much time. It is more comfortable to buy a ticket from Dushanbe – there are three flights a day between these cities.
This guide to iconic landmarks and sights of Khujand is protected by the copyright law. You can re-publish this content with mandatory attribution: direct and active hyperlink to www.orangesmile.com.

City tours, excursions and tickets in Khujand and surroundings

National and city parks around Khujand
♥   National Park 'Ugam-Chatkal' , 151.7 km from the center. On the map

One of the smallest countries in Central Asia that is famous for its rich history and culture – Tajikistan really has much to impress its guests. Marvelous mountain sceneries, broad prospects for active recreation, interesting archaeological regions, and historic landmarks of different periods await for guests of this wonderful country. Different mountain ranges occupy more than 90% of the country’s territory. Such a complex terrain has made it possible to preserve peculiar natural and historic places of interest. … Open

Search touristic sites on the map of Khujand

Sightseeing in regions nearby Khujand

Istaravshan
Istaravshan is situated not far from Khujand, so it is better to arrive in this city first. The easiest way to reach Khujand is by airplane from Dushanbe. As a rule, there are three flights a day between these cities. Of course, tourists can choose to use the train, but trains in this direction cross the territory of Uzbekistan, so passengers need to pass the Uzbek customs ... Open »
Tashkent
The destroyed part of the city was quickly restored and built up. Today, Tashkent is inferior to modern Russian megacities with its infrastructure level and inimitable appearance. Besides, the city has preserved the incomparable charm of the past. One of the main distinctive features of Tashkent is a huge number of colorful Eastern markets that are very popular with the guests ... Open »
Dushanbe
It is easy to get to Dushanbe from Moscow. The direct flight lasts only four hours. Upon arrival at the airport, tourists can use public transport to get to the capital of Tajikistan. There are trolleys, buses, and minibuses that go in the right direction. Naturally, there are many taxi drivers who are always ready to take guests to the center of Dushanbe. Finally, it is ... Open »
Samarkand
The history of Samarkand is the alternation of full declines and heydays. Unique architectural monuments acquaint tourists with the rich past of the city. Exactly Samarkand keeps up the traditions of Uzbekistan, so there is no better place to acquaint with the culture and traditions of the country. In 2001, the territory of the city was listed in the UNESCO World Heritage ... Open »
Bukhara
The necropolis was mostly built in the 16th century. The complex consists of numerous buildings and constructions that form the ensemble – the Mausoleum of Saint Bakhouddin Naqshbandi, the mosque of Muzaffarkhan, Khakim Kushbegi Mosque, minarets, and a tomb complex. That being said, the Mausoleum of Saint Bakhouddin Naqshbandi is the most important sight in the complex. ... Open »
Mazar-i-Sharif
Do you like nature? The gorgeous nature of Afghanistan is one of the reasons why tourists arrive in this country. Lake Zorkul is a true treasure that attracts numerous tourists to the region where Afghanistan borders with Tajikistan. It takes a while to travel from Mazar-i-Sharif to Lake Zorkul, but the result is worth the effort. The name of the lake sounds poetic, and the ... Open »

All about Khujand, Tajikistan - sightseeings, attractions, touristic spots, architecture, history, culture and cuisine. Prepare your trip together with OrangeSmile.com - find out the 'must see' things in Khujand, which places to visit, which excursions to take, where the breathtaking views are waiting for you. Planning your trip with this travel guide will help your to get the most out of Khujand in few days.