Sightseeing in Bukhara - what to see. Complete travel guide 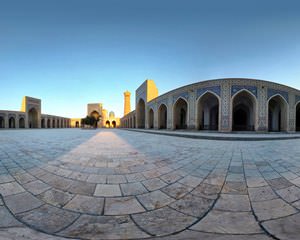 In Central Asia, there is a city that has always attracted a great number of tourists from all over the world. This city is Bukhara. What is so special about it? First of all, it is important to mention that this settlement was one of the largest trade centers on the Silk Road. However, this is not the only attraction of Bukhara. The city is rich in architectural landmarks that date back to medieval times. There are more than 140 types of different buildings in the territory of the city. This is the reason why Bukhara is often recognized as the museum city.
The age of Bukhara is more than two thousand and five hundred years. According to a local legend, Prince Siyavash, the son of Iran’s shah, was the founder of Bukhara. The prince married the daughter of king Afrasiab. Siyavash built the city with a citadel in the center soon after the wedding. After that, he ordered to establish the town of Shahriston.
The history of Bukhara started in the 4th century. Archaeologists found coins with Sogdian inscriptions on them. When Genghis Khan decided to conquer Central Asia, he almost completely destroyed the city. Bukhara started rebuilding during the reign of descendants of the great khan. The Khanate of Bukhara was established in 1506 when Muhammad Shaybani conquered Samarkand and Bukhara. This country in Central Asia reached the peak of its development at the end of the 16th century. Bukhara became the capital city. Copyright www.orangesmile.com
The Naqshbandi necropolis is the most important sacred place in the city. The necropolis got its name in the 14th century after Baha-ud-Din Naqshband Bukhari. According to historical data, he was the founder of one of the largest Sufi Muslim orders, the Naqshbandi. The master tried to persuade his followers that people need to study and work, forgetting about their life as hermits. 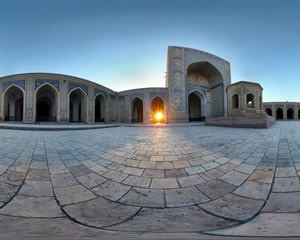 The necropolis was mostly built in the 16th century. The complex consists of numerous buildings and constructions that form the ensemble – the Mausoleum of Saint Bakhouddin Naqshbandi, the mosque of Muzaffarkhan, Khakim Kushbegi Mosque, minarets, and a tomb complex. That being said, the Mausoleum of Saint Bakhouddin Naqshbandi is the most important sight in the complex. Pilgrims from all over the world come here to honor the memory of the prominent Sufi leader.
When exploring Bukhara, visit the palace built to honor the last emir of the city - Mir Mohammed Alim Khan. This residence was built at the end of the 19th century. Inside the palace, visitors can see artworks created by local talents. These crafts are exhibited in the Art Museum that is open in the palace. Nowadays, this architectural landmark is a UNESCO World Heritage Site. 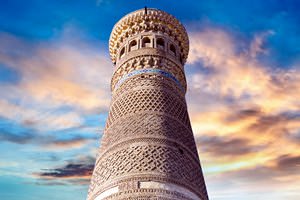 If we translate the name of the palace, it will sound something like “a star palace that resembles Moon”. The architecture of the building is a stunning combination of European and Muslim architectural styles. Numerous fountains decorate the garden near the palace. After a walk in the garden, visitors can always relax in beautiful marble pavilions. Everything is made from the finest materials and looks amazing.
There are many different mosques in Bukhara. If you like exploring religious landmarks and sacred places, don’t forget to visit one of them. The Magoki-Attori Mosque is situated in the central part of Bukhara. The mosque was rebuilt several times during the 10th to 14th centuries. This mosque has an unusual location that differentiates it from other mosques. The Magoki-Attori Mosque is built four and a half meters deep in the ground as if it is built in a hole. A visit to this mosque is a great way to learn more about the architecture of the past. 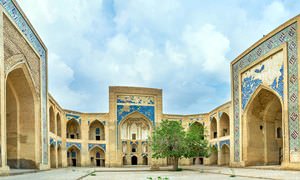 Nowadays, there is a museum in the ancient shrine, which exhibits the best works of local carpet weavers. This is a truly spectacular place dedicated to carpets and similar items, some of which are true masterpieces. Moreover, during an excursion in this museum, you will learn how Uzbek carpets differ from carpets made in Kazakhstan, Turkey, Armenia, and Iran. The museum also exhibits saddlebags and items that local people used to decorate their yurts in the 18th – 20th centuries.
When you feel tired of sightseeing, consider spending some quality time at Hammam Borzi Kord, a local bathhouse that is the most popular public place in the city. If you are a tourist and a man, then the doors of this steam paradise are open for you from 2 pm and until midnight. You will be able to not only sweat out in the hammam but also to enjoy relaxing massage and apply the scrub that cleans the body. 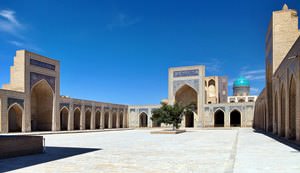 It is easy to get to Bukhara from the capital of Russia, Moscow. There are flights to the city three times a week. Moreover, Uzbek Airlines connect Bukhara and Saint Petersburg. This is a weekly flight. Airplanes from Tashkent arrive in the city every day. Tashkent trains will take you to Bukhara on any day of the week. However, the journey time can be up to six and a half hours.
This guide to iconic landmarks and sights of Bukhara is protected by the copyright law. You can re-publish this content with mandatory attribution: direct and active hyperlink to www.orangesmile.com.

City tours, excursions and tickets in Bukhara and surroundings

Sights around Bukhara from our guide 'Extreme places on Earth' 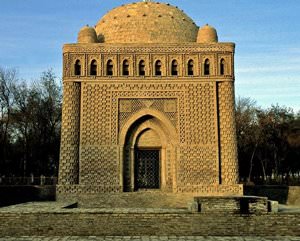 Distance from Bukhara center - 4.7 km.
During the construction of the mausoleum, any expensive finishing materials were not used, its main decoration was originally a delicate ligature of decorative brickwork. The builders made the mausoleum not only incredibly beautiful but also very durable, after the elaboration of the cultural layer, modern architects managed to restore its exquisite appearance completely. The old building has its own interesting secret. The building looks different at different times of the day because of the special brickwork, it depends on how the sunlight falls on it. … Read further

Many cities in Uzbekistan appeared as stops on the Silk Route. Bukhara is one of them. This is one of the largest cities in the country that, nevertheless, preserved its historic heritage. The name Bukhara literally means “the noble” or “the holy” and indeed in the past it was considered one of the holiest cities in Central Asia. The old part of the city is primarily famous for the Lab-i-Hauz square and fountains. The capital of Uzbekistan, Tashkent, is the cultural center of the country. Main attractions here include Kaldyrgach-bly Mausoleum, Khavendi Takhur Sheikh Mausoleum, Abdulkasim Madrassa, Yunus Khan Mausoleum, Khazret Imam and Mausoleum of Zainuddin-bobo Sheikh. … Open

Search touristic sites on the map of Bukhara

Sightseeing in regions nearby Bukhara

Samarkand
In welcoming Samarkand, there are almost no noisy entertainment venues, so the city will delight those who like spending their free time far from the bustle of big cities. There are several big upscale hotels that are ready to offer its clients a wide choice of entertainments. Find fashionable restaurants and pubs exactly on the territory of guesthouses. The quiet streets of ... Open »
Istaravshan
The first settlement on the site of modern Istaravshan appeared yet in the 6th century BC. That settlement had another name – Kiropol, also known as Kireskhata and Kurushada. Many scientists think that Persian king Kir was the founder of the city. When Alexander the Great invaded Central Asia he had troubles capturing Kiropol because the city had a sophisticated protection ... Open »
Dushanbe
According to the official historical records, Dushanbe was founded in the 17th century. At that time, there was a kishlak on the site of the city. This kishlak had the same name as the modern capital of Tajikistan. This was a small settlement that emerged on the crossing of trading routes. Every Monday, a big and quite noisy bazaar opened in the kishlak. Perhaps, this is the ... Open »
Mazar-i-Sharif
Do you like nature? The gorgeous nature of Afghanistan is one of the reasons why tourists arrive in this country. Lake Zorkul is a true treasure that attracts numerous tourists to the region where Afghanistan borders with Tajikistan. It takes a while to travel from Mazar-i-Sharif to Lake Zorkul, but the result is worth the effort. The name of the lake sounds poetic, and the ... Open »
Tashkent
Despite the fact that most of the historic buildings were destroyed by the earthquake, there are several preserved interesting excursion objects in Tashkent. Fans of sightseeing tours can diversify their recreation with visiting interesting museums. Also, many amazing cultural events are held in the city. Tashkent is perfect for those who have long wanted to acquaint with the ... Open »
Khujand
According to historical data, the city existed yet during the ancient times of the Achaemenid Empire. When Alexander the Great captured this ancient land, he decided to protect his new territory better and renamed the existing settlement to Alexandria Eschate. In the 13th century, the army of Genghis Khan completely destroyed the city. However, Khujand rose from ashes and ... Open »

All about Bukhara, Uzbekistan - sightseeings, attractions, touristic spots, architecture, history, culture and cuisine. Prepare your trip together with OrangeSmile.com - find out the 'must see' things in Bukhara, which places to visit, which excursions to take, where the breathtaking views are waiting for you. Planning your trip with this travel guide will help your to get the most out of Bukhara in few days.