Sightseeing in Samarkand - what to see. Complete travel guide 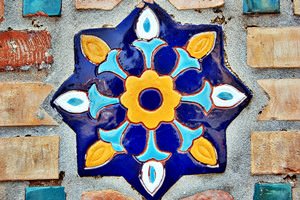 One of the oldest cities in the world is very popular with tourists now. For many years, the way of living in Samarkand has not almost changed. Like many centuries ago, the liveliest areas of the city are its vast markets where you can not only buy amazing sweets and gifts, but also chat with your friends and sink into an atmosphere of national comfort.
Samarkand is the same age as Babylon and Rome. As scientists suppose, the city is almost 3 000 years old. The ancient city is located on the Silk Road. That is why different conquerors, including the troops of the Arab caliphate and great conqueror Alexander the Great, had been struggling for its territory for over two thousand years. The city was destroyed completely but rose from the ruins and got on with its life.
The history of Samarkand is the alternation of full declines and heydays. Unique architectural monuments acquaint tourists with the rich past of the city. Exactly Samarkand keeps up the traditions of Uzbekistan, so there is no better place to acquaint with the culture and traditions of the country. In 2001, the territory of the city was listed in the UNESCO World Heritage List. Archaeologists have been working in Samarkand for many years. Some archaeological sites are open for tourists, so everyone can see all invaluable artifacts. True symbols of the city are wonderful mosques that will impress all the connoisseurs of old architecture. Copyright www.orangesmile.com
In welcoming Samarkand, there are almost no noisy entertainment venues, so the city will delight those who like spending their free time far from the bustle of big cities. There are several big upscale hotels that are ready to offer its clients a wide choice of entertainments. Find fashionable restaurants and pubs exactly on the territory of guesthouses. The quiet streets of Samarkand will impress shopping enthusiasts and fans of leisurely strolls more. Besides interesting streets stalls and noisy markets, there are a lot of interesting restaurants. The acquaintance with the culture of Samarkand is impossible without the tasting of national dishes. 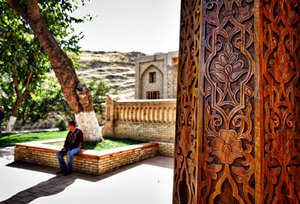 The starting point of many sightseeing tours in Samarqand is the Registan Square. There are a lot of mosques and tekkes that were built in the 15th-17th centuries. The oldest tekke on the square is Ulugbek. This architectural complex looks very harmonious despite the fact that the exact date of its construction is unknown. All the buildings are decorated with fine mosaics. On the square, there are traditional patterns made of colorful stone. There are also a lot of trees and decorative plants complementing an atmosphere.
One of the most mysterious attractions of the city is the Chupan Ata Shrine built in the 15th century. This shrine was constructed in honor of the extraordinary person, St. Chupan Ata who was esteemed by local herdsmen in the Middle Ages. There are very few written references to him. Many modern historians even think that he had never existed. The shrine is located on the top of the Kukhak Hill. Its main value is a big sky-blue dome. 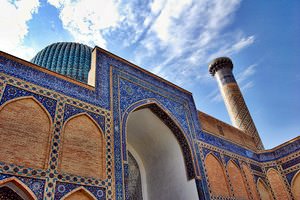 You can learn more about important events of the history of Samarqand in the Afrosiyob Museum. The historic museum was opened in 1970. Now, it presents the rich collections of archeological exhibits that were found the city territory and surroundings were explored. One of the most interesting collections is one of the artifacts found in the archeological district of Afrasiab. It includes old frescoes, samples of paintings, old coins, ceramics, ancient weapons, and accessories.
Fans of unusual attractions should definitely visit the holy water source Nur associated with many exciting legends. According to one of them, the meteorite, from which the light came, fell here in the prehistoric period. The crater appeared on the surface and the stream ran out of its center. Its water has healing properties. The latest researches have confirmed that is consists rate mineral compounds. The beautiful complex of pools and viewing platforms that have a beautiful view of the wonder of nature has been built around the spring. Tours to the Kyzylkum Desert are really popular with nature admirers. It is one of the biggest deserts in the world. It is almost 300 000 km2.
This guide to iconic landmarks and sights of Samarkand is protected by the copyright law. You can re-publish this content with mandatory attribution: direct and active hyperlink to www.orangesmile.com.

City tours, excursions and tickets in Samarkand and surroundings

Sights around Samarkand from our guide 'Extreme places on Earth' 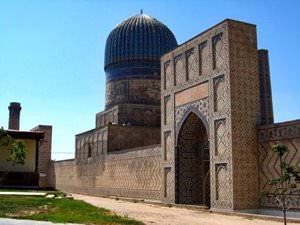 Distance from Samarkand center - 2.8 km.
To accelerate the construction process, 99 elephants were brought from India, they were used to transport stones and other heavy loads. Another interesting symbol of the ancient mosque is the bazaar located near its walls, which was opened more than 600 years ago. As in the Middle Ages, today it continues to work, in this picturesque bazaar, you can always buy fresh fruits, sweets, and interesting souvenirs. The most beautiful mosque is accessible for visiting absolutely for everybody. The locals believe that this shrine can grant women, who visit it, health and happiness of motherhood. … Read further

Search touristic sites on the map of Samarkand

Sightseeing in regions nearby Samarkand

Istaravshan
In the past, there was a church in the museum’s building. It opened in the 60s of the 19th century. In the mid-20th century, Narsiddin Nazarov, a history teacher, collected numerous historical artifacts and decided to show his collection in a museum. He founded a museum with a total area of two hundred and fifty square meters. By visiting this museum, you will find out not ... Open »
Dushanbe
The next attraction in Dushanbe will excite not only adults but also young guests of the city. In 1960, the city’s authorities founded a zoo. The area chosen for the zoo has an ideal location due to picturesque nature and dense bushes. For many years, the Dushanbe Zoo was the best in the USSR. In the 70s of the previous century, approximately 1060 animals lived here. After ... Open »
Bukhara
In Central Asia, there is a city that has always attracted a great number of tourists from all over the world. This city is Bukhara. What is so special about it? First of all, it is important to mention that this settlement was one of the largest trade centers on the Silk Road. However, this is not the only attraction of Bukhara. The city is rich in architectural landmarks that ... Open »
Khujand
An elegant and fantastically detailed carved décor covers all walls of the mosque. There is a winter hall inside the Masjidi Jami Mosque, and walls in this hall also have intricately carved ornaments. Do you want to look at the panorama of Khujand? In this case, you need to get to the north-eastern part of the shrine and find a minaret with arched passages. This observation ... Open »
Tashkent
Despite the fact that most of the historic buildings were destroyed by the earthquake, there are several preserved interesting excursion objects in Tashkent. Fans of sightseeing tours can diversify their recreation with visiting interesting museums. Also, many amazing cultural events are held in the city. Tashkent is perfect for those who have long wanted to acquaint with the ... Open »
Mazar-i-Sharif
In the northern part of Afghanistan, tourists can visit Mazar-i-Sharif, a large city and the capital of Balkh province. The name of the settlement means “Tomb of the Prince” in the Tajik language. This is a beautiful and ancient city that is acclaimed as one of the sacred places of Shia Islam. While traveling in Afghanistan, tourists prefer to visit Mazar-i-Sharif and enjoy ... Open »

All about Samarkand, Uzbekistan - sightseeings, attractions, touristic spots, architecture, history, culture and cuisine. Prepare your trip together with OrangeSmile.com - find out the 'must see' things in Samarkand, which places to visit, which excursions to take, where the breathtaking views are waiting for you. Planning your trip with this travel guide will help your to get the most out of Samarkand in few days.