Detailed hi-res maps of Galway for download or print 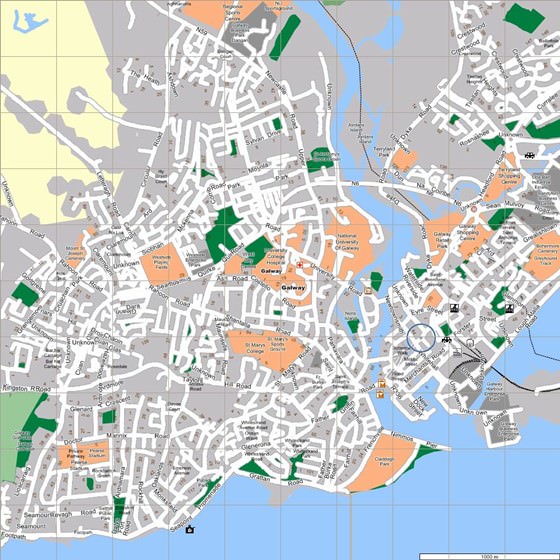 The actual dimensions of the Galway map are 999 X 999 pixels, file size (in bytes) - 250036. You can open this downloadable and printable map of Galway by clicking on the map itself or via this link: Open the map. 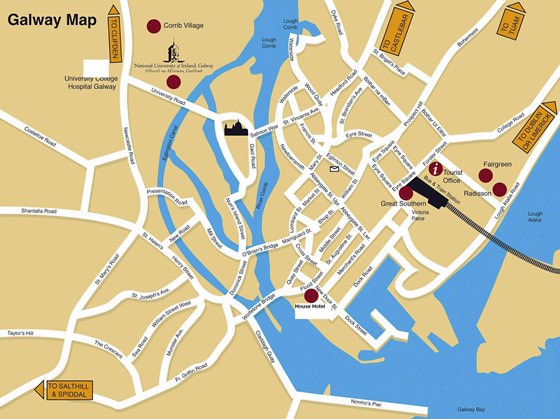 The most popular type of public transport are buses. In Ireland, buses do not only run intra urban routes. There are also long-distance runs that connect the most remote regions. Transport as has been earlier mentioned goes in strict accordance with the schedule. The buses, usually two-storey and greenish in color are in excellent working condition and running around the city. Railway connections on the other hand have also been developed at the highest level. All major cities are connected with the most remote settlements by railroad tracks. Virtually all trains running through Ireland are speedy and their technical condition is at a high level. The cost of train tickets depends on the class of the wagon, the direction of travel and the distance. Please note that for several years now, the Government of Ireland has been planning to begin construction of a subway. Initially, it was in the plan to build only two branches of underground transport which will connect the Northern part of Dublin with the Western part. … Open

The economy of the Republic of Ireland over the past twenty years is gradually gaining momentum. The economic system largely depends on trade. Several decades ago, the agrarian sector played a dominant role in the economic development of the country. However, its influence diminished over time. Now the profit from the agricultural sector is not more than ten percent of the total Gross Domestic Product (GDP) of the country. About eight percent of the total number of working citizens is engaged in this sector. The area of ​​meat and dairy production has received more development in Ireland. Poultry farming is however poorly developed. Plant cultivation in recent years is also a subsidized activity. People usually grow various types of cereals, potatoes and sugar beet. Nevertheless, the total number of agricultural products is not enough even for domestic consumption, so wheat and many other items are imported from abroad. Active fishing is conducted in coastal waters. Cod, haddock, herring, mussels and lobsters, as well as salmon are exported. … Open

Search for services, infrastructure and sights on map of Galway

Our guide chapters over Galway

Since that time, the rule of the de Burgh dynasty that has eventually accepted the Irish culture was established in Galway. The city developed primarily as a trade center. During the Middle Ages, the city's administration was occupied by local merchants' dynasties. Galway's official status was received in 1484, when it maintained close economic ties with England, while relations with Ireland were more than … Open

Another notable medieval structure is Lynch's Castle dating back over five hundred years. It has repeatedly changed its status throughout its entire history. The castle had served as a prison for a long time, and today the prominent medieval building is occupied by one of the city's banks. Lynch's Castle is considered one of the Galway's most spectacular Gothic-style architectural monuments. Originally it belonged … Open

In the heart of the city, in a beautiful 18th-century building, you can find Nile Lodge B&B & Self-Catering Hotel that is also aimed at lovers of the first-class recreation. Surrounded by a very beautiful well-groomed garden, among its distinctive features is an unparalleled interior. Priceless antique furniture made of precious wood, original works of art and designer decorations - the hotel looks like an … Open

Ecotourists from all over the world flock to the picturesque Connemara National Park. Fabulously beautiful lakes rich in fish, hills, and pastures covered with dense forests where you can meet typical representatives of local farms - you can enjoy this natural magnificence and harmony endlessly. The national park has several attractive hotels and specially-equipped camping sites, so all travelers can stay in … Open

Maps of Killarney
A traditional festival called The Gathering falls at the end of February. At this time, music does not stop for a minute in The Gleneagle Hotel where musicians charge everybody with a good mood for a long time. In addition to the music program, the audience is also pleased with dance, theatrical and cultural ones - visitors are entertained by stand-up comedians, all kinds of ... Open »
Maps of Dublin
The motherland of many famous writers, including James Joyce, is the location of one more interesting event, namely, Bloomsday Festival. The event traditionally takes place in the middle of June. During the festival, visitors can see actors perform sketches from the most famous work of the writer, Ulysses. The locations of these small performances are scattered around the ... Open »
Maps of Belfast
You should also visit the Festival of Fools. It is celebrated from May 2 to May 6 here. The streets of Belfast are filled with comedians, mimes, clowns, actors and acrobats at this time. Comedians perform in bars and restaurants. Costumed parades and processions regularly pass through the streets. For example, you may encounter a crowd of actors dressed as gorillas. They will ... Open »
OrangeSmile.com - online travel reservation expert providing reliable car rental and hotel booking services. We feature more than 25.000 destinations with 12.000 rental offices and 200.000 hotels worldwide.
Secure Server