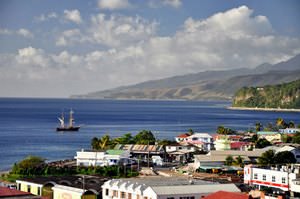 The largest number of historical and architectural monuments is concentrated in the capital of Dominica, the city of Roseau. Founded at the times of colonization, Roseau is witness to the whole modern history of the island, associated with the European invaders, slavery and the struggle for independence. Though Dominica has been inhabited long enough, most of the objects of the Museum of History are associated with the period of struggle between England and France in the Caribbean. This small patch of land has, among many others, become their arena. The variety of exhibits will allow learning a lot about how the modern culture of Dominica was formed. A small number of surviving Aboriginal artifacts are also represented here.
Family holidays with kids in Dominica Island. How to entertain your child, things to show to children.
Vacation in Dominica will be great for children, who are ready to learn something new and leave traditional activities for some time. The thing is, there are no specialized places for kids …

Open
The Catholic Cathedral is a living witness to the dominion of the French on Dominica. Constructed almost three centuries ago, it still impresses with the beauty of the decoration and the elegance of the forms. Interestingly, the cult building was entirely constructed from the stone, brought from neighboring islands. The British, who owned Dominica after the French, did not destroy the cathedral but built their own, now known as the Anglican Church of Roseau. The small size, laconicism, and simplicity show very vividly the difference between Catholic and Protestant architecture.
Another important part of the heritage of European colonists is the Roseau botanical garden. Opened in the late 19th century, it still boasts a large collection of local flora. The garden is divided into two parts, and only one of them is opened to the public. In the other one, they grow trees for economic purposes. Also, there are quite rare species of parrots - Jaco and Sisserou. Despite the fact that in the 20th century the natural disasters caused serious damage to the garden several times, it is still a must for all nature admirers. Copyright www.orangesmile.com
Cuisine of Dominica Island for gourmet with top restaurants and cafe
Dominican cuisine combines the traditions of French, African, and American Indian’s cuisines. Remember that most of the local dishes are very spicy. The restaurants are located only in …

Open
The Carnegie Science Library is one of the largest buildings in the entire Caribbean. The works of famous world scientists are collected in the building, outwardly resembling a regular cube. Part of the books was given by the US, part – by a variety of international funds. Today the library is open to any foreigner, who wants to expand his horizons. 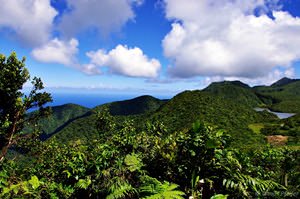 If you are interested in military engineering, then take a look at the Cabrits National Park. Fort Shirley, one of the central locations for the deployment of British soldiers in Dominica, is located on its territory. It was named in honor of the island's governor, Thomas Shirley, under whose leadership the building was constructed in the 18th century, during the war with France. To date, the fort is partially destroyed but is still of great interest for both historians and travelers. By the way, the view from the fort on the coast is just gorgeous.
Authentic traditions, festivals and lifestyle of Dominica Island inhabitants
Dominica, despite its small size, has a very rich cultural heritage. However, the official language here is English, so in large tourist areas, it will not be difficult to find an …

Open
The "Territory of the Caribbean", the only remaining aboriginals’ territory on the islands of the Caribbean, is the real gem of Dominica. The Cabrits, as they call themselves, still, like hundreds of years ago, catch fish here, weave baskets, hollow out canoes, carve statues, prepare their national dishes and celebrate religious and social holidays. Anyone can enter their territory. You can visit one, several or all the villages in this area, talk with the locals and observe their life. If you want, you can watch a theatrical performance about the history of Dominica in Kalinago Barana Aute or buy some of the products of the local craftsmen.

This guide to cultural sights Dominica Island is protected by the copyright law. You can re-publish this content with mandatory attribution: direct and active hyperlink to www.orangesmile.com.
Dominica Island - guide chapters 1 2 3 4 5 6 7 8 9

Unique spots in Dominica Island and near 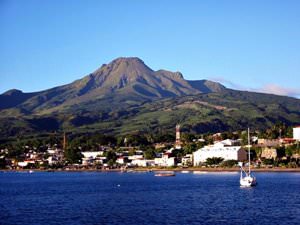 Distance from Dominica Island center - 78.9 km.
Streams of hot gas and ash during the eruption were so strong that they reached the city in less than a minute. It was completely destroyed. None of the local residents and refugees could survive. Recent geological formations that have occurred on the island are linked to the volcanic activity of 1929 - 1932's, when the volcano got a new dome. The massive eruption caused underwater geological changes that were found only during the detailed investigation. Researchers realized that the seabed near the island of Martinique has been dropped a few hundred meters after a catastrophic release of hot ash and gas. … Read further 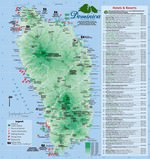 Excursions over cultural sights of neighbours of Dominica Island

Diamant
Étang des Salines Lake remains one of the main symbols of the region. The peninsula got its name after the salty lake. Magnificent Étang des Salines is located just 600 meters away from the coast. This area is famous for its picturesque landscapes and is perfectly suitable for a stroll. Sainte-Anne is considered the most beautiful town of the peninsula. It will also impress ... Open »
Long Bay
Another outstanding 18th-century monument is the English Harbor located in the south of the island. Now, these places are located within a vast national reserve where several more historic buildings have also been preserved. Walking around the harbor, one can see 200 years old structures made of stone. Some elements of decoration have partially survived here. One of the most ... Open »
Grenadines
Frenchmen had been formally owing the island until the 17th century. However, they didn’t settle here and the had never built anything, too, as they were unable to confront furious Caribs opposition. Meanwhile, the Indians weren’t peaceful. They were afraid that the Garifuna – black Caribs – would seize the territory, so they just let Frenchmen to settle here at the ... Open »
Bridgetown
As it is not hard to guess, Cricket Legends Museum is dedicated to everything connected with the game. It exhibits numerous memorabilia including uniforms, autographed bats, trophies, and detailed information about famed cricket players from Barbados. In order to learn more about the history of Parliament and notable social activists of the country, visit Barbados National ... Open »
Saint Martin
The ancient Fort Willem was completely destroyed; today there is a television tower on the site of its ruins. The island is famous for its outstanding natural attractions. Fans of eco-tourism will be interested in climbing to the highest point of St. Maartin - Paradise Peak mountain. Its height is 426 meters. The mountain offers a fabulously beautiful panoramic view of the ... Open »
Tortola
Artifacts from pre-Columbian times are kept in the local folk Museum. In addition to all kinds of statues, weapons and clothing items there are many exhibits related to the sea and sailors. Do not miss the opportunity to visit the Old Government House. All the rulers of the island since its settlement by the British sat in this monumental building. You can admire old ... Open »