Sightseeing in Riga - what to see. Complete travel guide 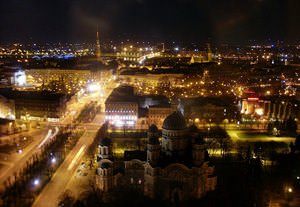 Tourists, who are familiar with the history of Riga, will surely understand the meaning of the expression "Riga is the city that must be freed all the time". This shopping center, founded by German merchants, had to survive in different conditions and endured sharp changes in its development. Independence in 1918, arrival of the Red Army in 1940, the second independence in 1991, and, finally, Latvia's joining the EU in 2004 – the history of the city is really rich.
Top touristic routes around Riga: architectural sightseeing and landmarks
Discovering the architecture of Riga from bird's eye view! Church of St. Peter, National Library of Latvia, Latvian Academy of Sciences, Riga Central Market, Virgin of Anguish Church, all those monuments are defining the image of Riga …

Open
The political, cultural and economic center of the country is defined by luxury buildings in the modern style, beautiful park complexes, as well as standard buildings that have remained in the city from the Soviet era. The Old Town

is full of wonderful houses, small shops and restaurants. Nowadays, this part of Riga is included in the list of world heritage sites by UNESCO. The city on the bank of the Western Dvina, or, as the river is called in Latvia, the Daugava, is home to numerous museums that traditionally attract numerous fans of culture and art. Riga is traditionally known as the most expensive city of the Baltic. Despite this fact, tourists are still recommended to visit the city. The extraordinary hospitality of Riga is one of reasons for that.
The Great and the Small Guilds.
The Great Guild

was founded in the 14th century. The building was reconstructed many times in the following years. Currently, the building hosts the National Philharmonic Concert Hall. Copyright www.orangesmile.com
Cultural vacation in Riga - fantastic architecture and monuments
Riga Cathedral, Latvian National Opera, Freedom Monument, Riga Radio and TV Tower, as well as many others, they all become the world's cultural heritage objects and remain as iconic monuments for Riga …

Open
The current building of the Small Guild

was constructed by the city architect of Riga Johann Daniel Felsko in 1866. The last renovation of the building took place in 2000. The interior of the Small Guild is particularly posh. Visitors will find here wonderful stained glass windows, rich chandeliers, and walls decorated with paintings of the city. 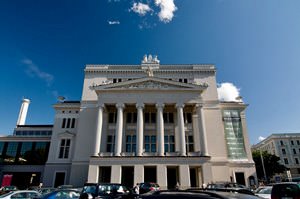 is a wonderful church, which design is an intricate mix of romance, gothic, Renaissance, baroque and classics. The church is the embodiment of the Old Town, of its diversity and uniqueness. The cathedral is equipped with one of the largest organs in the world. Many years ago Franz Liszt himself composed music specifically for this organ.
Family holidays with kids in Riga. How to entertain your child, things to show to children.
In Riga, travelers with children will find many exciting entertainments and pleasant surprises. As a rule, families enjoy visiting Spice shopping center. In addition to nearly countless …

, created in the XV, XVII and XVIII centuries, consists of three houses. These are the oldest stone buildings in Riga. The ensemble gives an idea of how people used to live in one of trading and artisan quarters of Riga. After a major restoration that was made in the 50s of the previous century the houses have been turned into architectural museums. 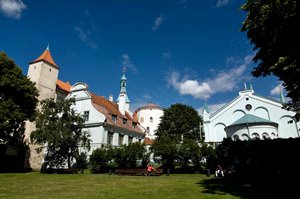 was built in the XIII century. In the XVII century, it was used as a Swedish garrison church. During the Northern War the church was destroyed, but later it was rebuilt again.
Cuisine of Riga for gourmet with top restaurants and cafe
Restaurants in Riga are not distinguished by widest choice of delicious dishes and delicacies. Food here is pretty simple, but it is very nourishing and has its own taste benefits. The menu …

is the youngest and the only surviving gate from the 25 gates that once existed in Riga. 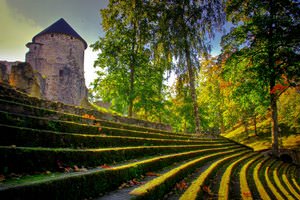 Riga is beautiful in any season, but tourists are usually recommended to visit it in the fall.

Shopping streets in Riga
♥   Shopping area ' Elizabetes iela' Riga, 1.1 km from the center. On the map

National and city parks around Riga
♥   Nature Park 'Beberbeķi' , 2.5 km from the center. On the map

Sights around Riga from our guide 'Extreme places on Earth' 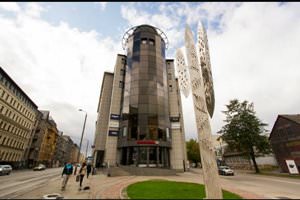 Distance from Riga center - 3 km.
The main feature of the building is the tower located in its side part. Its facade is almost completely lined with mirror tiles. This unusual combination of classic and futuristic elements has made this building a notable city landmark. It is located on one of the busiest central streets, close to popular historical sites in Riga. A small square with an interesting monument is located in front of the building's entrance. Fans of modern architecture can take interesting photos here. … Read further

Search touristic sites on the map of Riga

Sightseeing in regions nearby Riga

Jurmala
Outstanding fish dishes remain the top choice for many tourists. Beer fans might be thrilled to try a new delicacy – traditional beer soups. Hearty meat dishes are the basis of the national cuisine, with cabbage being the most typical garnish. There are also popular restaurants that offer traditional Russian and Belarusian cuisines. Jurmala is a fantastic place for a ... Open »
Bauska
According to historical data, first settlements in the territory of modern Bauska existed long before the 15th century. However, there are not many records left, and the information that we have now is very incomplete. Local settlements started developing actively in the mid-15th century. This is the time when a castle of the Livonian Order was built near the town. According ... Open »
Cesis
There is one more important attraction in Cesis. This is the Āraiši lake dwelling site. The open-air museum on the shore of Lake Araisi gives an outlook on the earliest history of the region. The site features the remains of a fortified settlement that dates back to the 9th century. The museum was established at the end of the 19th century. However, archaeological ... Open »
Parnu
This is an ancient and picturesque city with rich history, as well as a famous resort with well-developed infrastructure. In addition to comfortable hotels and inns you will find here numerous resorts and holiday homes, so your vacation will be not only exciting, but also beneficial for health. Parnu is full of interesting sights to visit every tourist should have. Town hall ... Open »
Kuressaare
Estonia is a marvelous country that has not one but two capitals. Tallinn is the main capital of Estonia, but right now we are going to tell you about the other capital, the city of Kuressaare that has been a major city in the country for many centuries. It is situated on the picturesque island of Saaremaa. Because of such a location, the city has been the “island capital” ... Open »
Daugavpils
In 1577, the Russian tsar Ivan the Terrible captured the Livonian Dünaburg castle and ordered to build a new settlement on its site. This new town, Dvinsk, was continuously attracting Sweden and Poland, causing frequent armed conflicts. In the 50s of the 17th century, the Russians captured the town and renamed it as Borisoglebsk. This was not the end of fights for this ... Open »

All about Riga, Latvia - sightseeings, attractions, touristic spots, architecture, history, culture and cuisine. Prepare your trip together with OrangeSmile.com - find out the 'must see' things in Riga, which places to visit, which excursions to take, where the breathtaking views are waiting for you. Planning your trip with this travel guide will help your to get the most out of Riga in few days.