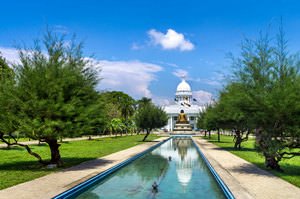 One of the most visited areas among visitors to Colombo is the historic Colombo Fort. In the middle of the 16th century, when the city was occupied by the Portuguese, the powerful fortress along with many ancillary structures was built here. The fort has not been preserved to this day, but some other old buildings have remained intact. At the end of the 19th century, the historic district was rebuilt. During this period, the remaining part of the fortress walls was demolished. Despite the abundance of modern buildings that today surround this area, it still retains its historical appearance. Many old buildings today house shopping centers, stores, and restaurants, which makes walking around the area even more exciting.
Advices to travellers: what you should know while being in Colombo
1. The best time to visit Colombo is the period from May to September. The air temperature is high all year round, its average value here is about 27 °C. At other times of the year, it …

Open
Unique attractions are at every step here, and the most recognizable one is the Old Lighthouse. The height of this square clock tower is 29 meters, its construction was completed in 1856. The lighthouse had been used for its intended purpose until 1952. Later it was obstructed by modern buildings and it ceased to be important as a navigation landmark. Not far from the lighthouse is the beautiful Buddhist stupa Sambodhi Chaithya. It has long lost its original religious significance and today is considered just a valuable architectural monument. Inside, the shrine is skilfully decorated with murals depicting the motifs from the life of the Buddha. On top of the stupa there is an excellent observation deck.
Colombo can offer many interesting museums. In the historic area, you can visit the Colombo Maritime Museum. This maritime museum's collection is very unusual, containing unique historical artifacts that were raised from the seabed off the coast of Colombo. Here one can see stone slabs, which are fragments of destroyed ancient buildings, antique bottles and statues, as well as examples of old ship equipment. Of particular value are models of old frigates and ships, as well as equipment that was used for the ocean exploration many years ago. Copyright www.orangesmile.com
Extraordinary weekend in Colombo - unusual places, services and attractions for travel gourmet
…

Open
Besides Buddhist sites, there are many interesting Christian monuments that were built at the dawn of the colonial era of Sri Lanka. In the historic area, one can find St. Peters Church, whose construction was completed in 1700. The very first chapel on its site was built much earlier. At the end of the 17th century, one of the wealthy governors built a posh house on the site of the destroyed chapel. The building housing the church today used to hold solemn banquets and celebrations. Later it was converted into a church, the main parishioners of which were local fishermen and sailors. Now there is a small viewing platform on the second floor of the building. 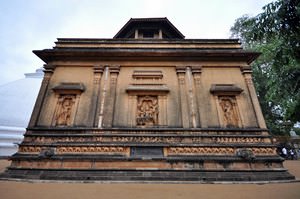 Among the Hindu attractions, it is worth noting the temple complex Kathiresan Kovil. It consists of two temples whose facades feature a stunning design. They are almost completely covered with miniature fine sculptures, which together form a unique artistic canvas. The temples are remarkable for holding ceremonies and festivals, which are always open to the public.
Shopping in Colombo - main shopping streets, outlets and boutiques
The most lively shopping area in Colombo is Pettah. In fact, it is one huge market. It can be difficult to move around this place due to the abundance of stalls and crowds of people. The …

Open
The Dutch Period Museum with a very diverse exposition introduces Colombo's guests to the events of the colonial past. The colonization of the region by the Dutch began in 1658 and lasted until 1796. All the exhibits collected in the museum belong to this period. It presents old weapon and coin collections, you can see old household items and even tombstones that were brought here from old colonial cemeteries. An interesting collection of historical documents is kept in the museum. 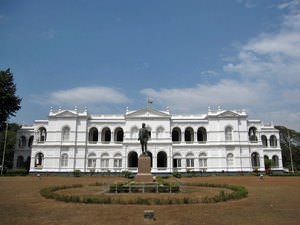 Among the preserved Muslim landmarks, Jami-Ul-Alfar Mosque stands out. The facade of this mosque is colored in white and red, which makes it one of the most noticeable architectural monuments in town. The mosque was built in 1909, its architecture is considered quite sophisticated. Many refined turrets, mosaic design elements and carved columns, beautiful arched openings, and porticos - many exquisite decoration elements can be seen on the mosque's facade.
Guide to Colombo sightseeing - things to see and to visit
Colombo is one of the largest ports of the Middle Asia. This city is full of unexpected contrasts and is very good for travellers who seek solitude rest. According to one of versions, the …

Open
The famous Grand Mosque Colombo is also located in the city. Since its completion in the 16th century, it has been the largest in Sri Lanka. Over the hundreds of years, the mosque has been repeatedly rebuilt, so today nothing has survived from its original appearance. However, it remains a very revered religious object for local residents. Only followers of the Muslim faith can get inside the mosque, all the rest can admire its beautiful exterior.

In the section below, you can get one of our excursion, activities or city discovery tours over Colombo and surroundings. Our website offers 10-30% lower ticket prices, when compared to the offline purchase on the spot.

This guide to cultural sights Colombo is protected by the copyright law. You can re-publish this content with mandatory attribution: direct and active hyperlink to www.orangesmile.com.
Colombo - guide chapters 1 2 3 4 5 6 7 8 9

What to visit during two-day excursion in Colombo

Cathedrals and basilicas near Colombo
♥   Basilica of Our Lady of Lanka, Tewatta, 14.9 km from the center. On the map 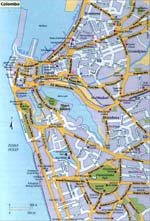 Photogallery of cultural heritage of Colombo

Excursions over cultural sights of neighbours of Colombo

Chennai
The most visited place is Kapaleeshwar Temple dedicated to Lord Shiva. The facade of the temple, as well as its interior is decorated with an incredible number of unique sculptures. Fragments of ancient frescoes dating back to the mid13th century have also preserved here. The most outstanding architectural monument of the Middle Ages is San Thom Cathedral. It was founded in ... Open »
Bangalore
Bangalore is also home to several unique natural attractions, the most famous of which is Lake Ulsur. Every day the lake is visited by thousands of tourists who want to make a walk along the picturesque shore or enjoy a boat ride, during which they can slowly examine the local beauty. Travelers, who arrive in Bangalore in late August, are very lucky as they can visit the ... Open »
Male Atoll
Capital city – Malé is an attraction on its own as well. The city is especially breath-taking when you look at it from high up in the sky. You’ll be likely offered to have a helicopter excursion, and you should agree on it. Malé is pretty small, you can get around it for about literally an hour, nevertheless, it strikingly combines features of a modern metropolis. ... Open »
Maldives Island
Sultan Park itself is a landmark. Here you can see not only the landscape architecture of the regular park, but also historical buildings, tropical birds, and observation decks offering magnificent views of the capital of Maldives. Go for a walk in Jumhooree Maidan Park or Independence square. This is a great place for a relaxing holiday or a picnic. Shady alleys and a ... Open »
Goa
In addition to curious religious facilities, Goa features diverse fortifications; the most famous among them is Fort Aguada. It has been built in the first half of the 17th century and has played a crucial role in battles with the British and German conquerors. The fort has survived massive attacks and kept the status of unassailable. It was able to fully preserve its unique ... Open »
Bombay
Museum excursion will stun and impress genuine art connoisseurs as among the showpieces presented in the museum one will find ancient engraved plates and paintings, statues and antique furniture. The first floor of the ancient palace hosting the museum is taken with a science exhibition. Among religious sights and landmarks of Mumbai the St Thomas Cathedral is of great ... Open »

Culture guide to Colombo. Which fascinating sights to visit once you are in Colombo: temples, churches, museums, theaters and castles. Recommendations (with addresses, phone numbers and links) on the places 'must visit' in Colombo. Plan your own city excursion by using this page info!