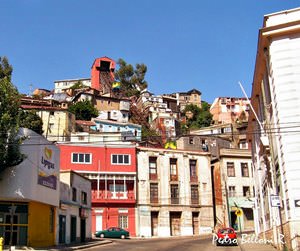 The northern part of the country is characterized by large deserts. Arica is the northmost city in Chile. The old city is full of buildings constructed during the colonial period, and Plaza de Armas Square is the location of the most famous sight of Arica – St. Marcus Cathedral. There is also an old Spanish fortress built in the middle of the 19th century in the city. Nowadays, the fortress is used to hold the exhibition of the Museum of History and Arms. Nearby mountains hide another landmark of the region – Fort Alacran that is built on the rock. There are also unusual cultural places of interest in the city, for example, the Museum of Mummies. Some exhibits of the museum are several thousand years old.
National cuisine of Chile - specialties, recipes and restaurants
The climatic, ecological and cultural diversity of Chile is reflected in a cuisine of this South American country. Chilean Creole cuisine was created …
Read further
The city of La Serena is a popular tourist destination that never ceases to amaze guests. Tololo Observatory has become the symbol of the city. This is the largest observatory in the Southern Hemisphere. Besides that, there are several old wineries, gold mines and beautiful churches in La Serena. Visitors are usually charmed with St. Francisco Church that was built in 1844.
The amazing Rio Elqui Valley, which is completely used for fruit plantations, has become a true landmark of the country. The same applies to Atacama Desert that amazes tourists with its severe beauty. Archaeological excavations never stop in the desert. Guests are welcome to visit these sites, participate in jeep safari and various interesting excursions. Despite harsh weather conditions, there are more than 200 species of animals there. Of course, cacti are the most famous plant in Atacama – there are more than 150 types of them in the desert. Copyright www.orangesmile.com
National traditions and mentality of people in Chile
Such a bright country as Chile owes its uniqueness to the fusion of European trends and the heritage of indigenous peoples. Chileans like to talk …
Read further
Many places of interest and historic landmarks have survived in San Pedro de Atacama. Most of the landmarks belong to the Incan civilization and chinchorro tribe. Naturally, the capital of the country, Santiago de Chile, is home to many places of interest. The best way to explore the capital is to start from Plaza de Armas. The square is surrounded by many beautiful buildings – the Municipality building, Governor House, the Royal Audiencia, the cathedral, Fernandez Concha Portal, the old Post office and La Moneda Palace. 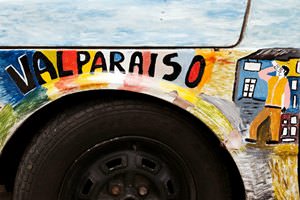 Vina del Mar is a popular resort in Chile. Because of lush greenery, the city is often called “the garden city”. Travellers will find here beautiful beaches, spacious parkways, banana tree groves and botanic gardens. There are also several museums in Vina del Mar, namely the Museum of Fine Arts, museums of history and culture.
Chile cultural sights. What to see?
Chile has lots of must-visit tourist destinations. Here there are historic buildings, churches with an amazing history, interesting museums and …
Read further

The first settlements were formed on the territory of Chili over 13 000 years ago. Despite this, little is known of the early history of the country. At the turn of the 13th - 14th centuries, these lands were conquered by the Incas. At that time, their major aborigines were Aymara and Kichwa people. In 1535, there was a period of the Spanish colonization. When Spanish conquerors came to the coast, several new towns were formed. In the 16th century, the population of the natives declined almost by half because of diseases and wars brought by Europeans. 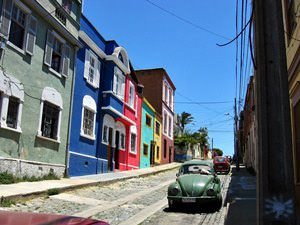 Spanish colonizers hoped for finding large deposits of precious metals on the lands they had conquered but Chili lacked them. Europeans started using the lands they had inhabited for agricultural purposes. In the 18th century, several large deposits of copper were found in remote areas of Chili. The exploitation of them became an actual beginning of the industrial activity of the country. In 1810, Chili gained independence from Spain. Over the past hundred years, the young developing country had seen the rapid growth of industry.
Things to do in Chile - active leisure
Nightlife in Chile is diverse and fascinating. Tourists are offered a wide range of nightlife facilities - bars, clubs, and casinos to suit every …
Read further
The country has started attracting the first tourists relatively recently. At present, Chili is well-known as a country with splendid winter and beach resorts, as well as unique nature and historical attractions. In the country, there are over ten upscale ski resorts that welcome guests at that time when popular European resorts are closed. 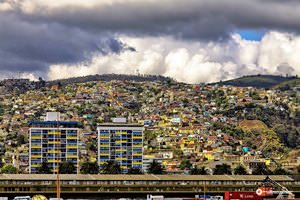 In the surroundings of Santiago, there is a young ski resort called Valle Nevado that has already won the hearts of thousands of travelers. The resort is decorated in classical French style. It offers its guests a large area for skiing and other sports entertainments. In addition to skiing, there are also amazing beach resorts in Chili.
What you need to know about Chile prior to visit - advices
1. Chileans like jocking, but their humor is kind of special and may seem insulting. For example, in Chile it is normal to make fun of shortcomings of …
Read further
On the Pacific coast, there is a charming old town La Serena that is famous for its colonial attractions and luxurious beaches. In the town, there are several old wineries that are very popular with tourists. The historical resort of Vina del Mar was visited by the wealthiest travelers at the beginning of the 20th century. In the coastal zone, the richest people of the world built private mansions and villas. At present, this place attracts fans of beach recreation from all parts of the world.

This article about iconic landmarks and sights of Chile is protected by the copyright law. You can re-use the content, but only under the condition of placement of an active link to www.orangesmile.com.
Chile guide chapters 1 2 3 4 5 6 7 8 9 10 11 12

National and city parks of Chile
♥   National Park 'Alerce Andino' . On the map

Famous and uniques places in Chile from our review series 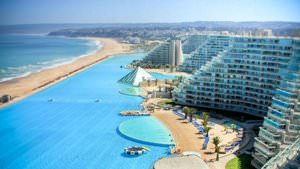 You will find the largest and the most elite pool in the world in Chili, it is in Algarrobo resort city, in the San Alfonso del Mar hotels’ territory. This pool spreads over the coastline in 1000 meters; its land area is 8 hectares. The largest pool in the world has the unique structure because water goes in it right from the ocean - that’s why it is salty. San Alfonso del Mar Pool is the Guinness Book of World Records’ champion. In addition, it has been the place for yachting competitions since its exploring.

Hotel guests have an opportunity to swim in it or to go boating. Glittering sand beaches surround the large pool. The hotel spends about 4 million dollars on supporting the pool; it is a real world sight. The deepness is variable in the different parts of the pool and it will … Read all 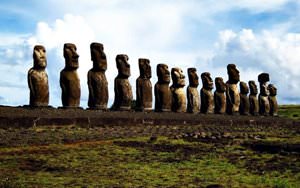 Rapa Nui National Park located on Easter Island is a world-famous landmark. Numerous stone sculptures that are called moai were discovered there. The area of ​​the national park is about 7 000 square km. For thousands of years, these places have being the center of volcanic activity. All the statues that were discovered on the island have been made of hardened volcanic rock. Those are nothing more than huge chunks of compressed volcanic ash.

The purpose of these statues is so far unknown. Many researchers believe that they had a religious significance. Apart from unusual statues, you can see the outstanding natural attractions in the Rapa Nui National Park. Walks on the slopes of volcanoes are very popular among tourists. Many rare plants grow in this fertile soil. Beautiful lakes … Read all 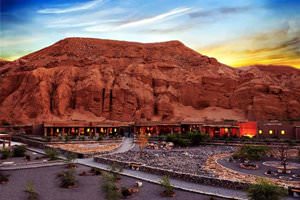 In Chile, the most extreme is the town of San Pedro de Atacama. It is situated right in the barren Atacama Desert. The place is considered one of the driest sites in the world. In average, there falls no more than 10 mm of rain per year. About 5 000 people are constantly living in this desert town. San Pedro de Atacama is one of the few extreme settlements in the world, which can be very amazing to tourists. Here, you can see a lot of unique attractions.

One of the main symbols of the town is the white church of San Pedro built in the 17th century. While walking through the streets, you can see traditional whitewashed houses made of adobe stone. In the northern part of the town, you can see the ruins of older settlements, as well as remains of the fortress Pucara de Keator.

Many … Read all
All unique sightseeing Chile

Sightseeing in popular cities of Chile

Hanga Roa
Hanga Roa is located to the south-west of the island. The main street in the town is called Atamu Tekena after the first leader in the area. It is still not clear when the first settlement on the island was founded. Historians think that first settlers appeared here between 700 and 1100. First Christian missionaries arrived in Hanga Roa in the middle of the 19th century. Currently, roughly two thousand and five hundred people live on the island. They speak English, Spanish, and the native … Read more

Santiago
The University of Santiago houses a planetarium, which is among popular attractions, as well. Due to modern equipment and ongoing scientific studies, it has been among the planet's best planetariums for many years. Every day it hosts various exhibitions, seminars, and lectures on astronomy. Yet, they provide special tours for children to play and learn. Several attractive national parks are located in the suburbs of the Chilean capital. Radal Siete Tazas National Reserve deserves particular … Read more

Valparaíso
The picturesque Muelle Prat is also very popular with vacationers because it is the location of the biggest market at the resort. The choice of items for sale is simply striking and ranges from inexpensive clothes and beach accessories to unique antiquity items. Tourists often come to this market to buy various handmade souvenirs, quality bags and hats, and inexpensive home décor items. Collectors can always find old artworks and other unusual antiquities carefully preserved by local sellers. … Read more