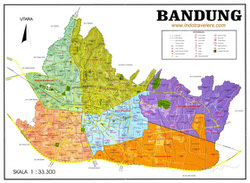 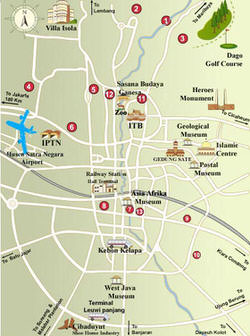 Interactive maps of hiking and biking routes around Bandung

1. You can zoom in/out using your mouse wheel, as well as move the map of Bandung with your mouse.
2. This interactive map presents two modes: 'Biking Routes' and 'Hiking Routes'. Use the '+' button on the map to switch between them.

This Bandung map has two modes: 'Railway Network' and 'Landscape & Rural Map'. Use the '+' button on the map to navigate.

Overview of festivals and celebrations in Indonesia

An unusual religious festival takes place in the province of Bengkulu in Sumatra. It is dedicated to a tragic event – the death of the prophet's grandson, Hassan Hussein. The festival culminates in a procession carrying turrets topped with replicas of Hussein's coffin. The battle in which Hussein died is also replayed. The Chinese Confucian Toa Peh Kong Festival is held in Manado in Sulawesi. The colorful procession includes horses, children in Chinese costumes, and boats. … Open

Our guide to Bandung

Restaurants of Bandung will definitely surprise even most hard-to-please gourmet customers. The menu of the restaurant contains lots of signature and exotic dishes, as well as true masterpieces of the national cuisine. Do not forget to try “batagor” - one of the most famous national dishes. This dish is cooked from meat, which is grilled and is usually served with soy sauce and peanut butter. The dish is offered … Open

Traditions and mentality of Bandung

The majority of residents of Bandung are the adherents of the Muslim traditions. The locals deeply honor the traditions of their ancestors and various religious customs have great importance for them. Guests should also not to forget to respect the established order and in no manner hurt the traditions of the natives. For example, you shouldn’t go for a walk wearing revealing and bright clothes or extravagant … Open

Bandung features a fascinating geological museum, which will interest the whole family. In it is a unique collection of exhibits, including skeletons of prehistoric animals, ancient fossils, as well as the skull and artefacts from prehistoric people. The museum houses a very interesting collection of minerals that have been discovered in places of volcanic eruptions. Despite the fact that the geological museum … Open

The Trans Luxury Hotel Bandung features spectacular interior. The former affects with abundance of bold design solutions. Luxury rooms have refined modern furniture and panoramic windows draped with translucent curtains. Each room has a spacious bathroom faced with marble. Fans of an active lifestyle will appreciate a first-class fitness center, which in addition to sports halls has a great massage parlor. The … Open

Bandung for children - what to visit

Not all Bandung guests are aware of the fact that the city has a beautiful ice rink – the Gardenice Rink. It is quite large and works all year round. Its main visitors are also parents with children. In the center, you can rent all necessary equipments and warm clothes. This entertainment center is known for its affordable prices. Parks which are in the city and its immediate vicinity enjoy great popularity … Open

Travelers who pay attention to horoscopes, as well as thrifty tourists will enjoy original themed hotel Zodiak @ AsiaAfrika. There are rooms absolutely for all representatives of the Zodiacal circle; rooms are decorated with great pictures depicting a zodiac sign and its brief characteristics. All rooms are very nice and well lit, they are dominated by bright colors and smart drapery made of natural fabrics. Themed … Open