Cuisine of Auckland for gourmets. Places for dinner - best restaurants 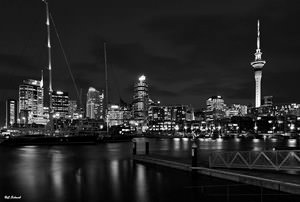 Local residents have adopted numerous dishes brought here from different parts of the world over the years of communication with Europeans. Today, Auckland is a home for immigrants from all over the world and a place for many tourists. So it's not too difficult to find the cuisine of any world country here. There are pizzerias, sushi bars, Chinese noodle bars, Indian restaurants, and American fast foods in the city center. So if you don't want to get acquainted with the cuisine of local residents, you can always keep your regular diet.
Guide to Auckland sightseeing - things to see and to visit
Auckland is the most populous city in New Zealand. It has become home to more than 1.3 million people, which is more than 25% of the country’s population. The first settlers appeared …

Open
However, if you miss the opportunity to get acquainted with the favorite dishes of the citizens, you will miss the chance to get to know their culture better. So you should spend at least a few nights to taste the creations of the city chefs. You can find a cafe or restaurant that matches different preferences in Auckland. You can have a budget meal right on the street or spend a romantic evening together at the table of a beautiful restaurant with a perfectly selected interior and fine cuisine.
You should keep in mind that it is not customary to leave a tip in New Zealand. Auckland is no exception. The owner of the restaurant pays generously for the work of the waiter. No one expects additional encouragement from the client. Copyright www.orangesmile.com
Family holidays with kids in Auckland. How to entertain your child, things to show to children.
Auckland will appeal to both young intellectuals and fans of active leisure. There are many places that will not leave any child indifferent here. Who doesn't like the idea of climbing a …

Open
Auckland's cuisine is mostly European today. Few Maori dishes have saved. Those dishes that have remained to the present have changed a lot. Many old recipes have been replaced by simple modern analogs. Local residents are sure that the food should be delicious, hearty, cooked from local products, and easy to cook. It is not customary to spend hours in the kitchen before the visit of guests or a romantic dinner here. Local people believe that the minimum time for cooking is the maximum pleasure from eating. 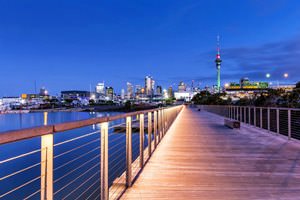 Hāngī is one of the few remaining traditional dishes. Hāngī is not cooked everywhere but only in those places where there is a special earthen oven. This simple structure allows baking food on hot stones. Hāngī is kumara, pumpkin, and pig or chicken meat cooked in such an oven. Sometimes seafood is added to this dish. Many local residents cook Hāngī on their own on weekends. They bake the ingredients for several hours in a conventional oven. However, the taste of the modern analog is slightly different.
Authentic traditions, festivals and lifestyle of Auckland inhabitants
You should not be surprised if a local resident mentions the word "kiwi" in a conversation when it is not about birds, fruit or the payment system. Many locals call themselves that here, …

Open
Kumara is a popular vegetable among the locals. This is a New Zealand variety of potatoes, characterized by a sweet taste. Kumara is most often baked or fried. It is served with sauce as side dish for fish or meat. The attitude is reverent to sauces in Auckland. Few dishes will be served without them. Even the steak that the locals love is served only with sauce. It is interesting that only men cook the steak traditionally. There is no discrimination here. This is just a tribute to tradition. Local chefs also love barbecues. Everything is cooked on it - from meat to oysters and vegetables. 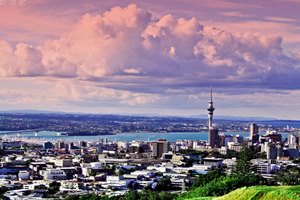 Lamb is the most popular meat here. Stews, chops, cutlets, and many other things are cooked from it. There are also second courses of pork, beef, and chicken here. Meat is cooked simply but tasty. In addition to steak, stuffed roast beef and all sorts of meat rolls, which are sometimes cooked from several types of meat, are very popular with the locals. Stuffed lamb shoulder is an interesting dish. Locals also love seafood. You can taste an assortment of stewed seafood, baked lobster, and a variety of fried fish in Auckland.
Excursion over cultural sights of Auckland - 'must visit' points of interest
There are numerous cultural centers that are interesting to visit, as well as other attractions in Auckland. Many of the excursion objects presented here are unique. Auckland Art Gallery is …

Open
Do you want a quick snack? Then look for chips, which new Zealanders like very much. You can also buy meat pies in any city store.

There are many desserts here. Pavlova cake is a real local culinary masterpiece. It was once prepared by a New Zealand chef for a Russian ballerina. Whipped cream, meringue, and a variety of berries are part of the cake. Cakes with fruit fillings and whipped cream, as well as fruit pies are a favorite treat of the locals. Only cookies and ice cream are more popular. Ice cream is often eaten with jam here. Local people drink a lot of coffee and tea. The tradition of a five-o’clock tea party persists in many families. Local white and red wines are worth tasting from alcohol. There are almost three hundred of their verities here. Beer varieties of Red Lion, OB Natural, DB Draught, and Speight also deserve attention.

This guide to cuisine and restauraunt in Auckland is protected by the copyright law. You can re-publish this content with mandatory attribution: direct and active hyperlink to www.orangesmile.com.
Auckland - guide chapters 1 2 3 4 5 6 7 8 9 10

City tours, excursions and tickets in Auckland and surroundings

Where to go for dinner in Auckland: recommended cafe and restaurants

The modern cuisine of New Zealand is much different from the traditional cuisine of Maori people. Many local dishes appeared here together with settlers in New Zealand. First of all, these were the British and other nations from Europe. That is the reason why Anglo-Saxon cuisine prevails in the country. It is easy to note this in the frequent use of fish, meat, fried potato, beefsteak, and roast beef. That being said, New Zealand proves its status of a marine country by a broad range of seafood in local cuisine. Virtually every local restaurant offers lobsters, shrimps, oysters, and different fish species. … Open

Searching where to eat - restaurants and cafe on Auckland map

Cuisine and restaurants in the neighbours of Auckland

Christchurch
It won't be difficult to find a restaurant in neo-Gothic Christchurch today. There are many establishments here due to the popularity of the city among tourists. They match any budget and preferences. You should not expect big revelations from the local cuisine. Unfortunately, almost all Maori recipes are lost. Therefore, the vast majority of dishes on the menu of city ... Open »
Kadavu Island
Traditionally, the guests are met with a welcoming gift, a glass of kava. It is believed that it is cooked to the old classical recipe exactly on Kadavu Island. The main ingredient of the beverage is the roots of yangona. Those who like seafood should certainly taste fried fish at one of the local restaurants. Before being cooked, it is marinated in fruit juice, so even ... Open »
Viti Levu Island
There are lots of restaurants here on the island owned by nationals of India. Dishes are cooked according to the Indian traditions in such restaurants as well as some Indian meals which recipes of which were brought to the island such as local kind of ravioli, masala dosa – rice crepes with coconut milk sauce – and roti – grilled round flatbread. Topoi – Fijian ... Open »
Mamanuca Island
You should taste a simple but unusual dish of palusami. It is the leaves of the plant colocasia, stewed in coconut milk. You should definitely order fish cooked over an open fire or fried seafood. Everything is cooked from the morning catch and abundantly flavored with spices. You should taste rourou. This is a kind of salad made from the leaves of the colocasia with a ... Open »

Travel notes on best cuisine and restaurants of Auckland (New Zealand) on OrangeSmile.com. Famous recipes and traditional dishes and courses in Auckland restaurants. Where to eat - our recommendations on popular places in Auckland, where you can taste delicious meal and also spend a good time with your friends.