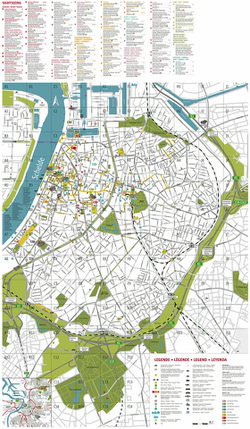 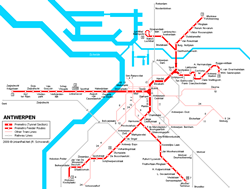 Interactive maps of hiking and biking routes around Antwerpen

1. You can zoom in/out using your mouse wheel, as well as move the map of Antwerpen with your mouse.
2. This interactive map presents two modes: 'Biking Routes' and 'Hiking Routes'. Use the '+' button on the map to switch between them.

This Antwerpen map has two modes: 'Railway Network' and 'Landscape & Rural Map'. Use the '+' button on the map to navigate.

City tours, excursions and tickets in Antwerpen and surroundings

Overview of festivals and celebrations in Belgium

At the beginning of summer, the Belgians celebrate Father’s Day, which has become the equivalent of Mother’s Day. The main motive of the holiday was the desire to emphasize the role of the father in the family and also in raising the offspring. On June 23rd and 24th, a historical reenactment of the last battle of Emperor Napoleon against the allied army takes place in Waterloo. Participants are dressed in costumes of the early 19th century. Everywhere here you will see a lot of historical props, weapons, and items of a bygone era. During the reenactment, visitors will be able to learn interesting information about weapons, life in bivouacs, watch the preparation of food on fire using old recipes, and shoot at targets. On July 21st, a military parade is held on the main square of the capital in honor of Independence Day. After its completion, folk festivals begin, where artists of various arts perform. The holiday is brought to an end with large fireworks. In mid-August, the Flower Carpet Festival is held in Brussels. As part of this holiday, volunteers prepare a carpet of fresh flowers on the Grand Place Square. The finished live web extends 75 meters in length and 24 meters in width. Amongst the fragrance of flowers on the square, a musical concert is held. … Open

Our guide to Antwerpen

You should definitely visit Plantin-Moretus Museum, the collection of which is devoted to the history of typography. The museum contains a large library, which stores copies of rare and old books. The halls of the museum are decorated with exquisite decor items, many of which have a long history of more than one hundred years. Museum of Diamonds is, without a doubt, no less interesting. The treasury of the museum … Open

You will find best Belgian beer in Den Engel Pub; De Vagant bar is no less popular. However, these are not only great places for lovers of this amazing drink. We suggest visiting Kulminator bar, where guests can enjoy more than 700 types of beer, as well as most unusual and exotic snacks. There are surely many nightclubs in Antwerp. The most popular of them are Noxx, Red & Blue, Pure, Nanno sur l'O and Café … Open

If you visit this city during warm months, you should definitely visit Pottenbrug restaurant, which tables are located on the outdoor terrace. Here visitors will find popular dishes from Belgian and French cuisine. Italian restaurant Spaghettiworld offers to its visitors approximately twenty types of spaghetti. Besides the huge menu, the restaurant’s moderate prices have made this place truly popular. The main … Open

An absolutely unique place, Hotel Rubenshof is a kingdom of modern. The hotel is located in an outstanding historic building with original, carefully restored frescos. The beautiful frescos can be seen on the walls and ceiling of public zones. Some windows still feature original stained-glass panels and detailed carvings in the hall are gilded. Travellers, who want to spend several days in an unusual hotel with rich … Open

Traditions and mentality of Antwerpen

Many centuries ago local residents were famous as refined gourmets. They have remained very skillful in food until our days. The reason for this is in the fact that this large port city has always had a large choice of different types of food. Ships coming from distant lands brought delicious seafood, rare wines and liqueurs here, as well as unusual spices and seasonings – a true dream of any chef or housekeeper. … Open

The National Maritime Museum is situated in the oldest building of Antwerp - het Steen. Amazing ship models and a section with real ships exhibited in the open air make this museum one of the most interesting places in the city. Antwerp museums. Antwerp is a real paradise for museum lovers. The Royal Museum of Fine Arts is the place where one can see not only thousands of works by old school … Open