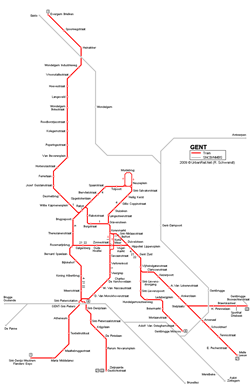 Interactive maps of hiking and biking routes around Gent

1. You can zoom in/out using your mouse wheel, as well as move the map of Gent with your mouse.
2. This interactive map presents two modes: 'Biking Routes' and 'Hiking Routes'. Use the '+' button on the map to switch between them.

This Gent map has two modes: 'Railway Network' and 'Landscape & Rural Map'. Use the '+' button on the map to navigate.

Overview of festivals and celebrations in Belgium

At the beginning of summer, the Belgians celebrate Father’s Day, which has become the equivalent of Mother’s Day. The main motive of the holiday was the desire to emphasize the role of the father in the family and also in raising the offspring. On June 23rd and 24th, a historical reenactment of the last battle of Emperor Napoleon against the allied army takes place in Waterloo. Participants are dressed in costumes of the early 19th century. Everywhere here you will see a lot of historical props, weapons, and items of a bygone era. During the reenactment, visitors will be able to learn interesting information about weapons, life in bivouacs, watch the preparation of food on fire using old recipes, and shoot at targets. On July 21st, a military parade is held on the main square of the capital in honor of Independence Day. After its completion, folk festivals begin, where artists of various arts perform. The holiday is brought to an end with large fireworks. In mid-August, the Flower Carpet Festival is held in Brussels. As part of this holiday, volunteers prepare a carpet of fresh flowers on the Grand Place Square. The finished live web extends 75 meters in length and 24 meters in width. Amongst the fragrance of flowers on the square, a musical concert is held. … Open

Our guide to Gent

Monasterium PoortAckere is a one-of-a-kind place where travelers can stay in the building of an ancient Neo-Gothic monastery. Cells of the monastery have been transformed into comfortable rooms that are now decorated with premium hardwood floors. Some guest rooms have old wooden beams. In the morning, the magnificent dining hall of the hotel is used to serve breakfast, and in order to relax guests are recommended to … Open

Traditions and mentality of Gent

Travelers are highly advised to visit the city during the days of 'Ghent Festival’, which is the biggest celebration of its kind in Europe. The venue of the festival is the central square of Ghent. Here take place all major activities. The main event of the holiday is a special fair, which attracts huge number of tourists from neighboring cities and countries. On numerous sales, which are organized during the … Open

Belfort Bell Tower is the central tower in the row of famous towers of Ghent. Most of the bell tower was built in the XIV century. Since 1999, UNESCO has added Belfort to the list of places of the world heritage. Saint Bavo Cathedral belongs to the Bishopric of Ghent. The ancient cathedral is the result of mixing various architectural styles, including Romanesque, Gothic and Baroque. The cathedral is the … Open

The next hotel in the list is particularly popular with fans of excursions. Hotel de Flandre is open in a beautiful 18th-century building. Among its attractive advantages, it’s worth mentioning the unique décor of guest rooms made of natural materials and fabrics. Massive wooden ceilings with built-in lamps, beam cedarwood and a fireplace in every guest room, old sculptures, and comfortable furniture – the … Open

Gent for children - what to visit

Travelers with school age children are advised to attend Ghent University Botanical Garden, which is open in the territory of Ghent University. The garden features a very unusual design – there are several interesting pavilions there, such as the pavilion with an artificial pond and water lilies, and special pavilions with rare plants, insects, and birds. The open space of the garden is perfect for unhurried walks … Open

Budget travelers are not deprived of an opportunity to stay in a creative designer hotel in Ghent. They are recommended to take a look at B&B De Bijloke. This hotel is open in a beautiful townhouse and offers only three guest rooms. All the rooms are made in different styles, and every room features beautiful décor and accessories made of wood and a big comfortable bed with elegant bed clothing. Besides an … Open