Preparing your trip to Jerusalem: advices & hints - things to do and to obey 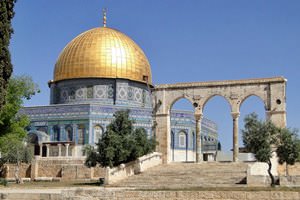 1. Currency can be exchanged in banks and in specialized exchange offices, which can be found in each district. Exchange offices located at the airport traditionally offer the most favorable exchange rates.
2. Tourists who plan to shop in small private shops and open markets will certainly need money in cash. Supermarkets, shopping malls, restaurants and gas stations usually accept payments by credit cards. Before you make a trip, make sure whether your credit or debit card is valid in the country.
3. Public institutions and shops usually open at 8:30 - 9:00 and work till16:00 - 18:00. Saturday is traditionally a day off, and Friday is usually a short working day that is reduced for a few hours.
4. Tourists should not forget about the general rules of behavior. People cannot express their emotions publicly and behave noisily in public places. When entering a public institution, you should definitely smile and greet the people present.
5. When heading to a business meeting, you should definitely do your best to arrive on time, but a delay will not be considered a reason for complaint. Local people are also not distinguished by punctuality and may be a little late. Copyright www.orangesmile.com
6. The locals are very responsive and friendly. Tourists can always ask them for help. In order to show respect for the local culture, visitors are recommended to learn a few phrases in the native language. It is worth noting that the local people have long become accustomed to a large number of visitors, so many of them speak different foreign languages fairly well.
7. Tourists should not forget to bargain at markets and in private stores. This will surely help to reduce the price. Experienced travelers say that one should bargain not less than ten minutes. This process has become a kind of a ritual.
Your active city break in Jerusalem. Attractions, recreation and entertainment - best places to spend your day and night here
Jerusalem attracts visitors from different countries by its priceless historical and religious monuments. However, this doesn’t mean that the city lacks entertainment facilities. …

Open
8. When you enter a large store or a supermarket, it is common to show the contents of the bags to security guard. This procedure is an optional rule, but many prefer to abide the rule for the sake of own security.
9. Workdays (from Sunday to Friday) are distinguished by excellently working public transport. Buses ply in the streets of the city from early morning to late evening. However, tourists should not forget that public transport doesn’t work on Saturdays, so getting to remote areas of the city will be quite problematic.
10. Unlike many other cities, in Jerusalem travelers are allowed to sit on lawn or use borders instead of benches. It’s very common here to see citizens who have sat down to rest directly on the asphalt. Such behavior is considered normal.

Preparing your trip to Jerusalem: advices & hints - things to do and to obey You can re-publish this content with mandatory attribution: direct and active hyperlink to www.orangesmile.com.
Jerusalem - guide chapters 1 2 3 4 5 6 7 8 9 10

What to visit being in Jerusalem - unique sights 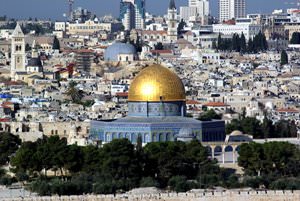 Distance from Jerusalem center - 1.2 km.
Jerusalem is interesting for travelers not only as the world's largest religious center, but also as the location of unique historical sites. Most of its priceless historical monuments are concentrated in the Old Town area, which is surrounded by unassailable walls. Many attractions hiding behind unwinnable walls are objects of global importance, including the Church of the Holy Sepulchre, the Wailing Wall and the Temple Mount. These facilities are annually visited by hundreds of thousands of tourists from around the world. … Read further 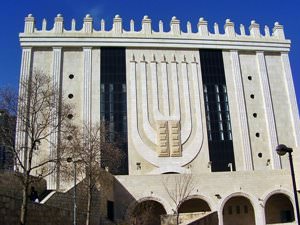 Distance from Jerusalem center - 1.4 km.
The synagogue has many interesting features. It is the largest in Israel since its construction. The height of the synagogue ark is 12 meters. Up to 70 Torah scrolls can fit in it at a time. This unique indicator allowed the Hasidic Belz synagogue to become a record holder in the Guinness Book of records. The luxurious candelabra decorate the hall. They also deserve special attention. Each of them is made up of 200,000 crystal elements. The best Czech crystal was used for making chandeliers. … Read further 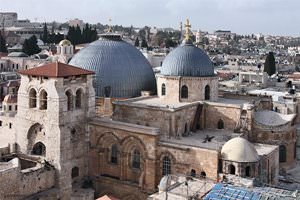 Distance from Jerusalem center - 2.6 km.
The Anointing Stone and a small cave with the Holy Sepulcher. Every year the Holy Saturday ceremony of the Holy Fire led by the Greek Orthodox Patriarch. Today the main Christian cathedral is a complex religious place that includes several chapels and monasteries. It is important to mention that the cathedral is oriented on three main religion confessions. That’s why its territory is strictly divided. … Read further

Tips for the cities around Jerusalem

Netanya
2. Active tourists should take into account that most of the rainfall comes in winter. If you don't want rains to ruin your sightseeing program, try not to plan a trip for the winter season. 3. It is also worth noting that Netanya has a very humid climate. Humidity reaches its highest values in summer, which, coupled with high air temperature, is not very comfortable. ... Open »
Amman
2. Amman taxis are one of the cheapest in the country, so you can easily use them to move around the city. If you want to make a trip to the city’s suburbs, it is better to use the services of the special buses – their rates are much more advantageous than in the usual taxi. 3. Amman suburbs are the location of a huge number of attractions located. It will take you ... Open »
Nazareth
2. Traditions in Nazareth are slightly different from the ones in other Israeli cities. This city is the only one in the country where Sunday is an official day off. 3. Entrance to all local temples is free. There are guided tours at certain hours, the schedule can be clarified in a tourist center. 4. The water flowing from the main city fountain is very clear. Many ... Open »
Haifa
2. Those who expect to go for holiday with pets are kindly requested to prepare all the necessary veterinary documentation. The term of validity of certain certificates is limited, so don’t get them earlier than six weeks before your trip. 3. Shoppers should be aware that all items are subject to 17 % VAT. Some stores give foreign buyers special checks to reclaim VAT ... Open »
Damascus
2. Tourists cannot take part in any protests and rallies. Various activities that promote protection of environment and other demonstrations not related to politics and social conflicts are the only exception. 3. Sale of alcoholic beverages is seriously limited during the holy month of Ramadan. Many restaurants and cafes are closed during this period, and in hotels guests ... Open »
Beirut
2. Choose your clothes carefully before visiting religious sites and attractions of the city. Women should not wear revealing or too tight clothes. Men should not select shorts and T-shirts with short sleeves. Instead of them make your choice in favor of loose pants and a shirt. 3. The travellers, who plan to use a taxi, are recommended to negotiate the cost of a ride in ... Open »

Travelling to Jerusalem - advices and tips. What should be provisioned in advance, the rules you might want to follow, and the things you better avoid doing in Jerusalem. We help you to make your trip smooth and easy, with no unexpected surprises.