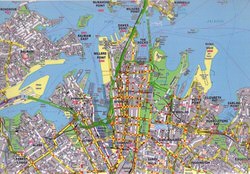 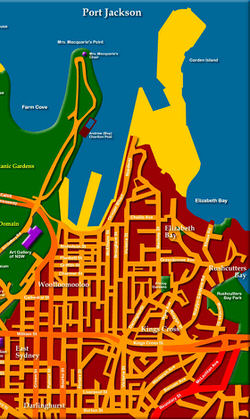 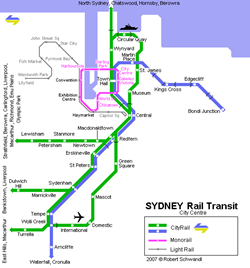 Interactive maps of hiking and biking routes around Sydney

1. You can zoom in/out using your mouse wheel, as well as move the map of Sydney with your mouse.
2. This interactive map presents two modes: 'Biking Routes' and 'Hiking Routes'. Use the '+' button on the map to switch between them.

This Sydney map has two modes: 'Railway Network' and 'Landscape & Rural Map'. Use the '+' button on the map to navigate.

Nature and parks of Australia

Australia is a State in the Southern Hemisphere occupying the smallest continent of the planet. It is located at the junction of two oceans – Pacific, and Indian. The territory of the country also includes the island of Tasmania, and several other small islands. Most of the continent is desert. The relief is represented by the Central lowland with depressions. On the elevated western platform lies the West Australian plateau. Along the east coast stretches the Great Dividing Ridge with steep eastern, and gentle western slopes turning into hilly spurs – downs. The lower mountainous range is the Eastern Australian Mountains. Australia is located in three climatic zones: subequatorial, tropical, and subtropical. When winter comes to the Northern Hemisphere, summer commences in Australia. The continent is dominated by a hot and dry climate. … Open

Our guide to Sydney

Souvenirs and jewelry with opals is an ever popular gift you can buy in Australia. The semi-precious stone has been actively mined in the continent for many years, so opal has already become a true national symbol. There is a special shop, Opal Minded, dedicated to the beautiful stone. It’s a great place to buy different accessories with magnificent opals. Opal Minded is also an official store of the same named … Open

If you are the fan of mountain bikes, then you should drive a little away from Sydney to pursue favorite hobby: 80 km west of the capital of the state is located the Blue Mountains National Park, where you will find many routes of different complexity. In addition to cycling, you can swim by canoe or make a descent from a mountain slope on the ropes. Do you like horse riding? If yes, so do not hesitate and visit the … Open

Weekend in Sydney in original style

When you’re in a mood for shopping, head to George Street and find a shop that offers authentic Australian uggs. A pair of fabulous shoes with natural fur will keep you warm even in biting frost and will become a true gem of your wardrobe. There is one more specialty store nearby - Opal Minded. As you can guess from its name, the shop offers a signature national treasure – opal stones and jewelry with them. … Open

Festivals and events in Sydney

In June, you will have the chance to experience the Sydney Film Festival - one of the most influential events of its kind in the Southern Hemisphere. In June, the Australian Burlesque Festival will take. No need to explain more, the name of the event is speaking for itself. Moreover, this event can not boast with a long history, but already remembered and loved not only by Sydney but also the residents of other … Open

The Sebel Sydney Manly Beach is a boutique hotel not far from ever popular Manly Beach. It’s one of the best destinations for travelers who seek a calm place for a serene vacation. Besides charming guest rooms with furnished private balconies and amazing seaside views, guests are welcome to swim in the excellent open air swimming pool that is located in the inner yard. The design of all guest rooms is made in … Open