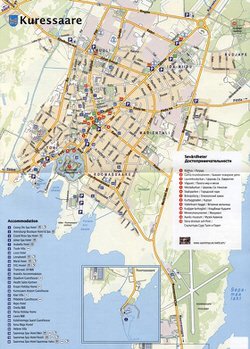 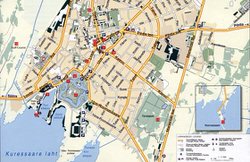 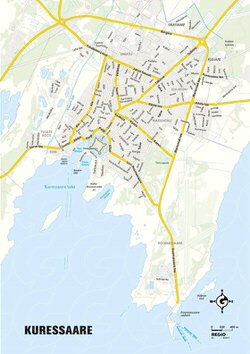 Interactive maps of hiking and biking routes around Kuressaare

1. You can zoom in/out using your mouse wheel, as well as move the map of Kuressaare with your mouse.
2. This interactive map presents two modes: 'Biking Routes' and 'Hiking Routes'. Use the '+' button on the map to switch between them.

This Kuressaare map has two modes: 'Railway Network' and 'Landscape & Rural Map'. Use the '+' button on the map to navigate.

City tours, excursions and tickets in Kuressaare and surroundings

Overview of festivals and celebrations in Estonia

Some holidays have attained a global character over time. Among them is the “Weekend Festival Baltic”, which takes place in the middle of summer. It originated in Lithuania but a year later, other Baltic countries joined in the celebration. With everyone gathered in Estonia, the celebration opens on the square in front of the Tallinn Town Hall. The week-long event is rich in folk festivals. Exhibitions, parades, performances of groups of folk music are organized in the city. In August, a festival of historical orientation “Battle of Narva” is organized in Narva. It is dedicated to the landmark episode of the Northern War. On the territory of the Narva fortress, members of clubs of military-historical reconstruction dressed in the uniforms of former times, meet and reproduce the course of the battle. … Open

Our guide to Kuressaare

Nowadays, the castle hosts the exhibition of a museum dedicated to the history of the majestic building, Kuressaare, and Saaremaa in general. The photo gallery, which opened here not long ago, unleashes the true beauty of local nature. The fortress frequently hosts open-air festivals and celebrations. Would you like to master an ancient craft? There are a forgery and two artisan workshops (a glass and a ceramic) in … Open

Maps of Ventspils
Ventspils Aqua Park is the best place for families. The wonderful entertainment center is open from May until October. Several swimming pools and slides, amusements and playgrounds, special areas for children and charming cafes – both adults and children will be in love with this gorgeous aqua park. It is important to mention that a transparent wall protects the park from ... Open »
Maps of Parnu
Travelers looking to buying alcohol souvenirs should visit a specialized shop named Liiwi pood. It is located in the heart of historical center of the city and offers a wide assortment of local vodka, liqueur and vintage European wines. The Apollo raamatupood book shop is rather popular among tourists. Tourists will find there lots of original books in different languages and ... Open »
Maps of Jurmala
Jomas Street is one more excellent place for walking and exploring the city. It’s one of the busiest streets of the resort, so the majority of interesting shops and restaurants are open there. You will see many street musicians and artists, as well as merchants who offer popular national souvenirs to guests. It’s a fantastic place to buy quality honey and paintings, ... Open »
Maps of Riga
Have you ever been to a duck hunt? This is your chance to hunt! And after a successful hunt, all the ducks will remain alive. Check the qualities inherent in true hunters: endurance, reaction, accuracy. Targets in the form of earthenware plates fly from four different positions at different angles, which provides the situation as close as possible to reality. Waiting for the ... Open »
Maps of Tallinn
If you prefer more quiet activities, visit one of the well-maintained golf courses in Tallinn. If you want to get a fair amount of adrenaline, go to the adventure park in Nõmme Seikluspark, where you will be tested for courage and perseverance in reaching the goal while passing the routes laid among the branches of trees. Fans of winter entertainment will be able to visit the ... Open »
Maps of Tartu
Year-round a huge selection of entertainment options is available to visitors of Tartu. The Aurakeskus water park has remained one of the most popular entertainment options for many years. Paying a moderate fee, visitors can gain access to a great swimming pool, slides and a sauna. Both demanding athletes and the youngest guests would like local pools. The water park regularly ... Open »
OrangeSmile.com - online travel reservation expert providing reliable car rental and hotel booking services. We feature more than 25.000 destinations with 12.000 rental offices and 200.000 hotels worldwide.
Secure Server