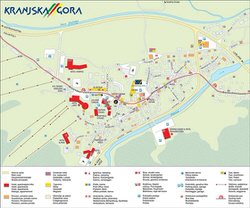 Interactive maps of hiking and biking routes around Kranjska Gora

1. You can zoom in/out using your mouse wheel, as well as move the map of Kranjska Gora with your mouse.
2. This interactive map presents two modes: 'Biking Routes' and 'Hiking Routes'. Use the '+' button on the map to switch between them.

This Kranjska Gora map has two modes: 'Railway Network' and 'Landscape & Rural Map'. Use the '+' button on the map to navigate.

Nature and parks of Slovenia

The Postojna Cave that has a karstic origin is to the south-west of the capital of Slovenia, Ljubljana. It stretches the maze of corridors for over 20 kilometers. The cave is unique. In one of its halls, there is an artificial reservoir inhabited by the blind aquatic salamander proteus. Only karst caves on the territory of Slovenia became the habitat for this unique creature. In 1872, railway tracks were laid in the cave, so today you can explore this attraction by riding a small train. The Postojna Cave became the world's only cave with a railway laid through it. … Open

Our guide to Kranjska Gora

In modern time, Kranjska Gora is not only a resort but also a combination of three alpine skiing centers, namely, the town itself, Podkoren, and Planica. Having made yourself familiar with the map of ski runs, you will notice that many routes start near the town of Kranjska Gora, then cross other mountain skiing centers, and then return to the area where they started. All pistes have developed infrastructure. … Open

Maps of Carinthia
Travelers who visit Rozegg should definitely appreciate the beauty and solemnity of the local safari park. You can walk through its territory on foot or by car. The amazing park affects with diversity of landscapes and a rich collection of inhabitants. Several interesting entertainment centers are situated in Treffen. There is the famous Mushroom Forest; a walk around it would ... Open »
Maps of Ljubljana
While in Ljubljana, it is worth visiting one of the workshops in order to remember pleasant pastime in the capital of Slovenia by learning something new. Gourmets often visit Cook Eat cooking studio where everyone can learn how to cook like they do in Slovenia. Want to create a real work of art? Then it would be worthwhile to mention MUS Art Studio. It is also worth exploring ... Open »
Maps of Badgastein
There are many opportunities for leisure activities in Bad Gastein in the summer. Of course, hiking in the surrounding mountains is the most popular activity. You can find a route of any complexity and duration, from walking for an hour to a real trip for several days. You can go to conquer the peaks on a mountain bike. There are also natural climbing trails in the vicinity ... Open »
Maps of Trieste
The city has a nice botanic garden, Giardino Botanico Carsiana, which is known for its collection of rare plants. Walking through the garden will be a fascinating and unforgettable experience; in warmer months it is decorated with thousands of fragrant flowers and butterflies that are fluttering slowly. The picturesque park Roseto di San Giovanni suits for walking and cycling; ... Open »
Maps of Zell am See
The most famous entertainment complex is Strandbad Zeller See located on the shore of the lake. This is a large-scale center with playgrounds for younger visitors, a beautiful pool and spa, where you can perfectly relax all day long. The territory of all large hotels hosts original nightlife and bars available to tourists at any time of the year. Ginhouse remains one of the ... Open »
OrangeSmile.com - online travel reservation expert providing reliable car rental and hotel booking services. We feature more than 25.000 destinations with 12.000 rental offices and 200.000 hotels worldwide.
Secure Server