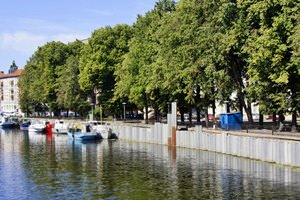 Despite the fact that Lithuania has the shortest coastline comparing to Baltic countries, every year thousands of beach goers come there. Klaipeda has incredibly attractive local beaches featuring pristine beauty and high environmental performance.
Guide to Klaipeda Region sightseeing - things to see and to visit
Klaipeda is one of the most attractive tourist regions of Lithuania. Its administrative center is the city of the same name. Other tourist destinations are Neringa and Palanga. Klaipeda …

Open
Tourists resting in Klaipeda choose of two upscale beaches, Melnrazhe and Giruliai. Those are typical urban beaches covered with sand. They are perfect for a comfortable long-term stay. These very beautiful parts of coast feature reasonable equipment.
Many guests prefer to go for beach vacations to Curonian Spit beaches, which are considered among the best in the world. They are constantly receiving honorary awards for high environmental performance. Fans of high-end leisure like to rest there. Wide beaches with white sand are framed by an incredibly beautiful pine forest. Curonian Spit beaches are considered among the most popular in Europe. Copyright www.orangesmile.com
Top hotels in Klaipeda Region for business trip or short vacation
Every city of Klaipeda has very attractive accommodation places; historic and luxury resorts are very popular among travelers. Memel hotel in Klaipeda occupies the completely renovated …

Open
Many travelers associate upscale vacations with picturesquebeaches of Palanga

. Absolutely all the beaches of the resort town are free and most of them are covered with fine white sand. Many beaches of Palanga are man-made, but that doesn’t detract from their merits. Absolutely all parts of the coast have plenty of equipment. There are cabanas, lounge chairs, a variety of sports facilities and attractions, as well as attractive restaurants and bars. There are always lots of guests at beaches of Palanga in high season. 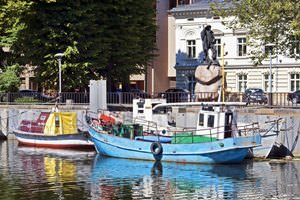 To the north of Palanga the attractive holiday village Sventoji can be found. It’s an ideal place for those who wish to relax in private ambience. The main part of the resort guests are seniors and travelers with children. Despite the abundance of tourists, local beaches feature very harmonious atmosphere. Coast of Sventoji is sandy and shallow, so it perfectly fits even the youngest visitors. There is an abundance of noisy entertainment venues, as well as interesting sights and places for recreation.
Guide to Klaipeda Region sightseeing - things to see and to visit
Klaipeda is one of the most attractive tourist regions of Lithuania. Its administrative center is the city of the same name. Other tourist destinations are Neringa and Palanga. Klaipeda …

Open
Decent selection of attractive beaches are offered by Neringa

, which is one of the most picturesque and ecologically clean regions of the country. All local beaches are awarded with the Blue Flag, which is the best proof of their high status. The resort is conditionally divided into four parts, of which Juodkrante and Nida

are considered upscale ones. Here you can discover the most beautiful beaches, as well as a lot of attractive hotels close to the coast. Wealthy travelers prefer to relax there. Nida hotels are the most expensive in the region. 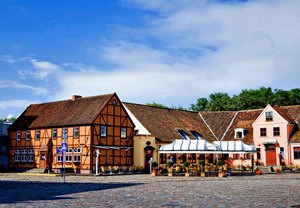 Thrifty travelers should pay attention to Pervalka and Preila villages. Local beaches are no less charming and equipped than in Nida, while atmosphere is more relaxed and easy. In addition to great beaches, Pervalka has incredibly beautiful parks and forests originating just next to the coast. It won’t be difficult to choose among many beaches of Klaipeda, as there are different parts of the coast suitable for fans of sports, for seniors and for the youngest travelers.

This guide to top beaches in Klaipeda Region is protected by the copyright law. You can re-publish this content with mandatory attribution: direct and active hyperlink to www.orangesmile.com.
Klaipeda Region - guide chapters 1 2 3

City tours, excursions and tickets in Klaipeda Region and surroundings

Nature and parks of Lithuania for active vacation

Another fascinating place for excursions and acquaintance with the Baltic nature is the Aukstaitija National Park located 100 kilometers from Vilnius. About 2% of the area of this park is a specially protected zone. It’s allowed to enter it only with a representative of the forest protection service. There are more than 120 lakes and a large number of small rivers and streams, which made the place very popular among fans of active tourism. One of the most picturesque places in the park is Lake Baldosas, which has 7 small islands. There is also a lake in the lake, which is the only one of its kind in the country. Another popular place among tourists is on the hill of Ladakalnis. A tourist trail goes to a place where in ancient times people performed rituals and worshiped pagan gods, in particular, the mother goddess Lada. … Open

Search for useful vacation services on the Klaipeda Region map

Top beaches and recreation areas in the region of Klaipeda Region

Jurmala
Tourists, who want to combine relaxation with wellness activities, will find Jaunkemeri Beach and Kemeri Beach more suitable for their needs. The most famous sanatoriums of Jurmala are open there. The majority of them were built close to healing mineral springs and mud wells. Guests of these areas of the resort can easily combine beach recreation and various rejuvenating ... Open »
Krk
The small Komoriska Beach, whose length is no more than 30 meters, would be a very pleasant place to stay. Close to the coast loom thickets of pine trees, where you can find shade from the hot sun. The beach is popular among older couples; there is always very calm atmosphere suitable for peaceful rest in its territory. Sandy beach Meline is the biggest in the island. Its ... Open »
Istria
Those preferring to rest in bustling ambience and eager to have holidays at the well-developed beach should visit Opatija. This resort offers over 20 kilometers of coastline with beautiful promenade running along. It doesn't matter what beach you will choose, as there is always a number of restaurants, sport centers and day spas nearby. City of Rabac is popular among ... Open »
Veneto
The most peaceful place along the shore is the Lido di Jesolo. It's a charming resort surrounded with Alps. Mountains protect the resort from winds and storms and shallow sea reaches +25C in summer time making it an excellent place to go with children. Despite being very popular place, Lido di Jesolo is known for its pleasing calm atmosphere. Another place of attention for ... Open »
Rab Island
An important feature of the island of Rab is a huge number of nudist beaches; one of the most popular among them is Kandarola. This beach is located in the southern part of the island, and many travelers know it under the informal name, English Beach. The coast is perfectly equipped; its territory can boast comfortable sun loungers and parasols. The focus of popular nudist ... Open »
Pag Island
Size is the distinctive feature of Straško beach, as it lasts for over 2 kilometers. Massive shore is very popular among active tourists and sea sports fans. This beach provides excellent opportunities for jetskiing, paragliding or other exciting activities. Straško beach is covered with fine pebble-stone and surrounded with picturesque landscapes. Travelers who prefer sand ... Open »

Travel guide to best natural recreation areas in Klaipeda Region for a quiet and secluded summer vacation. Fascinating hidden beaches, amazing bay and coves to sunbathe and swim in the gentle waters of the resorts of Klaipeda Region.