Sightseeing in Jerash - what to see. Complete travel guide 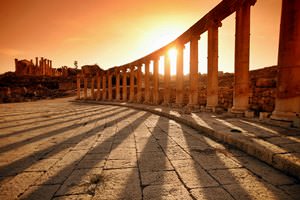 Many cities in Jordan are very popular with tourists, and Jerash is, perhaps, the second most popular in the country. This interesting city is situated in a valley of a striking beauty surrounded by forest-covered hills and fertile lands. It is hard to find another city in the world that has such a well-preserved look of an ancient Roman settlement. There is a logical explanation for this fact. For centuries, Jerash was hidden under thick layers of sand. The Roman province was unearthed only two centuries ago. Close to the landmark of the ancient world, there is the modern city of Jerash that is a vibrant and developing place.
First settlers on the site of the modern Jordanian city appeared during the Neolithic period. In 63 BC, the Roman troops captured the settlement and added it to the Decapolis league of cities. The settlement had another name at that time – Gerasa. This was a true period of prosperity for Jerash. Initially a small settlement, it turned into a large Roman province that was not only developing but also growing in size. The Byzantine Empire took over the region in the 4th century, turning Jerash into a center of Christianity. Muslims from the Umayyad Caliphate were the last rulers of Jerash. It didn’t matter who the ruler was, the life of the local people was peaceful and prosperous.
In 749, a devastating earthquake took place in Jerash. It ended the history of the Roman province. The city was almost completely in ruins. People, who managed to survive after the natural disaster, had to seek new places to live and abandon their homeland forever. Two centuries later, the mudflow masses after heavy rains completely wiped Jerash off the surface. Such naturally formed “protection” helped to save Jerash from perishing and looters. For centuries, no one even knew the location of the ancient Roman city until German explorer Ulrich Jasper Seetzen discovered the ruins of Jerash under tons of sand at the beginning of the 19th century. Copyright www.orangesmile.com
Do you want to travel back in time and see Ancient Rome? Visit the historical part of the Jordanian province. Jerash Amphitheatre is usually the first attraction that tourists visit during their excursion in the city. The size of this construction is truly tremendous. When looking at the giant amphitheater, it is easy to understand how big and important this city was in ancient times. The theater was built in the 2nd century. Initially, the theater was small and had only fourteen rows with seats. However, the population of Jerash was growing in size, and so it was decided to make the theater larger. At the peak, the theater could provide seats for 1,600 viewers. 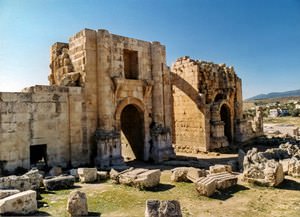 Even though many centuries have passed since the time of ancient performances and shows, and the city remained in a sand trap for such a long time, the theater is still active. Every summer, Jerash Amphitheatre hosts a festival. If you are lucky to visit this event, you will be able to learn more about the history of Jerash and to participate in a grandiose fire show. During this popular event, interesting performances and unforgettable shows take place in the amphitheater every day.
The Arch of Hadrian is, perhaps, the most important attraction in Jerash. It has a special meaning to the city. The beautiful arched construction was built in 130 AD. Roman Emperor Hadrian was planning to visit Jerash at that time – he enjoyed spending every winter in this Roman province. The arc got its name after the great Roman emperor. When choosing a site for the arc, builders thought that Jerash would continue growing in size to the south. However, their plans didn’t come true. Nowadays, the arc stands at some distance from the city. 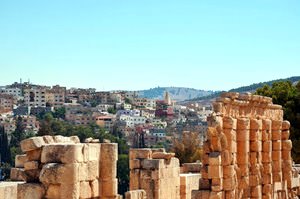 If you are interested in the landmarks of the Muslim period, consider visiting the nearby town of Ajloun and see its main attraction – the Ajloun Castle. Built at the end of the 12th century, this castle was supposed to protect trading paths between Syria and Jordan. The castle stands on a hill, so a visit to this beautiful landmark is a great opportunity to enjoy a striking panoramic view of the Jordanian land. On a sunny day, it is even possible to see shining Jerusalem cupolas. The castle had four towers and a moat that surrounded the building. It was protecting the castle from invaders in the past.
Several years later, one more tower construction was added to the castle. It had a hanging bridge and a parade gate with pigeon sculptures as decorations. Nowadays, when walking in the corridors of the castle, tourists can visit an interesting museum. The venue exhibits a large collection of various artifacts discovered in the castle and neighborhoods during the archaeological excavations. 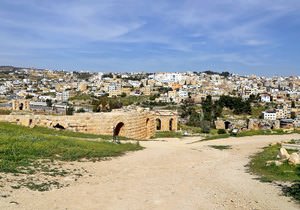 A modern road connects Jerash to Amman. The ride from the Jordanian capital lasts only forty minutes. Needless to say, it will be even shorter even you travel in a rented car or a taxi. There are daily intercity buses that connect Jerash and Amman. Taxi drivers are always ready to help guests of the hospitable country.
This guide to iconic landmarks and sights of Jerash is protected by the copyright law. You can re-publish this content with mandatory attribution: direct and active hyperlink to www.orangesmile.com.

City tours, excursions and tickets in Jerash and surroundings

Survived castles around Jerash
♥   Castle 'Rabadh Castle' , 16.8 km from the center. On the map

National and city parks around Jerash
♥   National Park 'Gan Hashlosha' , 49.6 km from the center. On the map

Sights around Jerash from our guide 'Extreme places on Earth' 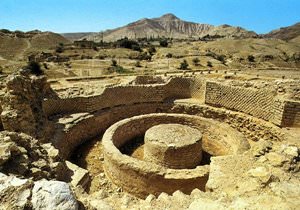 Distance from Jerash center - 63.7 km.
Jericho was a large-scale fortress with a very complex structure at that time. Seven stone walls were built to defend the city. They formed a maze. It was incredibly difficult for an outsider to enter the city's territory. An extremely beautiful blooming oasis with fertile soil and valuable sources of freshwater was located behind the defensive walls. The locals had something to guard behind seven walls. Besides, the city was located at the intersection of important trade routes. The history of Jericho ended after the city was captured by the Israelites. … Read further 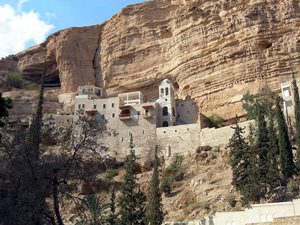 Distance from Jerash center - 62 km.
Later, in the year 480, Saint John Hozevitul came from Egypt to the monastery, which expanded the building considerably and added with the new buildings. Among the valuable religious artefacts that can be seen today are the relics of Saint John Hozevitul, as well as the relics of John's Romanian. The skulls of the martyrs who lived in the monastery at the beginning of the 17th century and were killed by the Persian conquerors are also regarded as an important relic. The monastery also preserves many interesting historical artefacts, so it is worth seeing for all tourists. … Read further 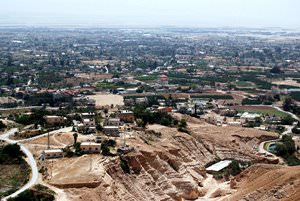 Distance from Jerash center - 61.6 km.
In 1930, archeologist John Garstang came to Jericho, and in the mid-20th century, the territory of the city was explored by Kathleen Mary Kenyon. Scientists have done a great job and followed the most important stages of development of the city. They managed to establish that in the Bronze Age Jericho was one of the largest and most prosperous cities in the world. The modern city is in many ways inferior to large metropolises, both in its population and scale; however, its main asset is the rich cultural and historical heritage. Jericho is a huge open-air museum; each element of its infrastructure and its way of life are unique. … Read further

The new entry policy is valid for travelers arriving by air, land, and sea. The Ministry of Public Health also published a list of precautionary measures aimed to protect citizens, residents, and guests of Qatar. It is important to ensure that everyone stays safe and healthy, and the ability to travel doesn’t cause the spread of the virus.

Search touristic sites on the map of Jerash

Sightseeing in regions nearby Jerash

Amman
Amman is an amazingly attractive city, which harmoniously combines old traditions of the antiquity and modern lifestyle. The history of this city has started over ten thousand years ago. At that time this place was known as Rabat Amon and was the capital city of Amon princedom. A bit later the city was conquered and ruled by the Romans and Amman was considered the territory of ... Open »
Nablus
Historians have a bit different information about Nablus. This settlement emerged long before our age. At that time, this was a major cultural center and a sacred Samaritan town. Many descendants of the Biblical Samaritans still live in Palestine. In the 1st century, the Roman army attacked Shechem and captured the city after a series of fierce battles. After that, the Roman ... Open »
Bosra
As the town was situated at the crossing of many important trading routes, it quickly became prosperous. It even started making its own silver coins. The region was actively developing in the 3rd century, but the Queen of Palmira and her troops invaded the region in 269. The Syrian land couldn’t resist the invaders, and the queen conquered Bosra. After a period of wars and ... Open »
Jericho
Christian pilgrims from all over the world arrive in Jericho in order to visit Mount Quarantania or Mount of Temptation, the height of which is nearly four hundred meters. The ascension to the mountain starts from the main city ruins. Does the path look too complicated? No problem, there is a cable car that will take you to the top fast. The view from the top of the mount is ... Open »
Madaba
The church built in honor of Saint George is one of the main attractions of the city. There was a Byzantine temple in this area before. The shrine was built in the 6th century. After the earthquake, the church, just like the rest of the city, turned into ruins. The building remained in this disastrous condition for more than a thousand years. Christian pilgrims managed to not ... Open »
Nazareth
The Temple of the Annunciation built in 1969 is one of the most important religious places of interest. The lower level of the Temple is a grotto where once lived Virgin Mary. The interior simply strikes visitors by its elegance and refinement; here you will see ceramic bas-reliefs, fine mosaics, and beautiful frescoes. In close proximity to this church is located one more ... Open »

All about Jerash, Jordan - sightseeings, attractions, touristic spots, architecture, history, culture and cuisine. Prepare your trip together with OrangeSmile.com - find out the 'must see' things in Jerash, which places to visit, which excursions to take, where the breathtaking views are waiting for you. Planning your trip with this travel guide will help your to get the most out of Jerash in few days.