Sightseeing in Al-Karak - what to see. Complete travel guide 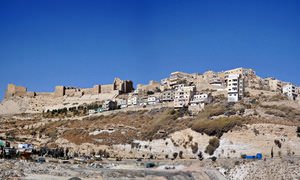 West Jordan offers tourists to visit the capital of one of the biggest regions in this part of the country - Al-Karak. The name of the city literally means “a town surrounded by a wall” when translated from Aramaic. An ancient castle is the highest spot in the region – in the past, this fortification belonged to crusaders. Al-Karak is situated not far from the border with Israel, so its ports have well-established trading routes with Jordan.
Shopping in Al-Karak - main shopping streets, outlets and boutiques
When visiting shops and markets of Al-Karak, tourists should pay attention to the traditional Arabic souvenirs, sweets, and spices. Local shops sell many interesting items made from clay. …

Open
First settlers appeared in the territory of modern Al-Karak more than two thousand years BC. According to the Bible, these were Moabites and Ammonites. Kir of Moab was the first town in this area. For many years, it was the capital of the Moab Kingdom. The history of Al-Karak is the history of changing different rules and civilizations. During one period, the city was a part of the Assyrian Empire. After that, the Nabatean Kingdom made Al-Karak a part of its territory. Later, crusaders invaded this territory only to be replaced with Mamluks. Nowadays, Al-Karak is an incredibly interesting place that attracts tourists from all over the world.
When visiting this part of Jordan, don’t forget to try local dishes that are widely present on the menus of Al-Karak’s restaurants. The city’s dining establishments please their guests with large and diverse menus full of interesting specialties such as ostrich meat steaks. Local food with young chicken has a distinct and unforgettable taste. All local recipes contain blends of herbs that are typical for Al-Karak only. You will not find similar tastes in any other restaurant around the world. Vegetarian guests may find it interesting to try Halloumi. It is impossible to fail to mention mushrooms with garlic and thymes. Copyright www.orangesmile.com
Excursion over cultural sights of Al-Karak - 'must visit' points of interest
The historic district of Al-Karak is rich in unique landmarks of the previous centuries. Crac des Moabites or simply the Kerak Castle is the heart of the historic city center. Crusaders …

Open
Tourists may be interested to learn more about the landmarks that they should visit in Al-Karak. The ancient castle, Kerak Castle, is a must-visit attraction. It is situated in the southern part of Al Qala'a Street. During a walk on this street, tourists will see multiple displays with interesting information about the most important events in the history of this region. There are mysterious dark corners that are possible to explore only if you have a flashlight. Having reached the north-eastern tower, vacationers can enter military barracks. All walls in the castle are decorated with old writings that unleash mysteries of the past and make visitors feel like they are time traveling. 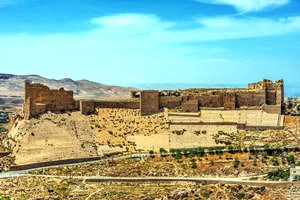 Don’t forget to explore an important part of the gorgeous castle – its stone slope. This slope was very important in the past as it was continuously defending the area from invaders and made it hard for prisoners to escape their prison cells. Besides this, many prisoners of famous Raynald of Châtillon ended their life falling down from the slope. That is why this area has become a symbol of not only safety but also sorrow and grief.
Shopping in Al-Karak - main shopping streets, outlets and boutiques
When visiting shops and markets of Al-Karak, tourists should pay attention to the traditional Arabic souvenirs, sweets, and spices. Local shops sell many interesting items made from clay. …

Open
During a visit to the castle, take a look at the citadel that overlooks Umm al-Thallaja. The main purpose of this building was to protect the castle from invasions. For this purpose, walls of the citadel are very thick (up to 6.5m) and have ridged edges. Not many protective facilities have walls of this kind. The citadel was built for the first time in 1260. 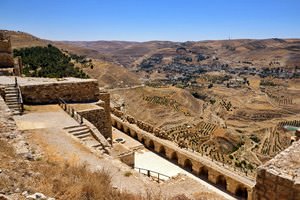 In order to learn more about traditions of Al-Karak and see interesting items created many years ago, don’t forget to visit the Al-Karak Museum that exhibits many precious findings and treasured discovered by archaeologists. In this museum, visitors can see many artifacts of different periods in the history of the city – Moabian, Byzantine, and Islamic. Besides this, a part of the exhibition is dedicated to crusaders and the time when the castle was their property.
Excursion over cultural sights of Al-Karak - 'must visit' points of interest
The historic district of Al-Karak is rich in unique landmarks of the previous centuries. Crac des Moabites or simply the Kerak Castle is the heart of the historic city center. Crusaders …

Open
The nearby settlement of Dana has only recently become open for visitors. This unique village is located only 30 kilometers away from Al-Karak. For tourists, this is a unique opportunity to see the ancient architectural world of the region. You will be able to learn more about Jordanian traditions. All houses here were built several centuries ago, but, despite this fact, people still live in Dana and carefully keep the traditions of their ancestors. 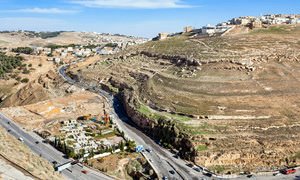 It is possible to reach the Jordanian city of Al-Karak by bus that makes rides to the area every day. If you want to visit the architectural treasure of the region – Dana Village – then you need to take a local minibus. It is also possible to get a taxi that will take you from Amman to Al-Karak. The road between these cities is a deserted place. Tourists can also choose to drive on the King’s Highway, but this ancient road is longer. On their way to Al-Karak, tourists can also visit such cities as Madaba and Wadi. Al-Karak itself is suitable for exploring on foot. This is particularly true about the historic center of the city that mostly consists of narrow winding streets with one-lane traffic.

This guide to iconic landmarks and sights of Al-Karak is protected by the copyright law. You can re-publish this content with mandatory attribution: direct and active hyperlink to www.orangesmile.com.
Al-Karak - guide chapters 1 2 3

City tours, excursions and tickets in Al-Karak and surroundings

Survived castles around Al-Karak
♥   Castle 'Kerak' , 0 km from the center. On the map

National and city parks around Al-Karak
♥   National Park 'Mezada (Harhava)' , 36.2 km from the center. On the map

Sights around Al-Karak from our guide 'Extreme places on Earth'

Distance from Al-Karak center - 67.9 km.
In recent years, the main threat to the world-famous shrines are terrorists. Not only the historic building, but parishioners suffered from them. Despite this, the Cave of the Patriarchs each year is visited by thousands of pilgrims from around the world. The vault will be a boon for those interested in the ancient architecture. A spacious hall with a high ceiling and large windows represents the traditional painting and artistic mosaic. The design of the crypt is luxurious and very discreet at the same time. … Read further 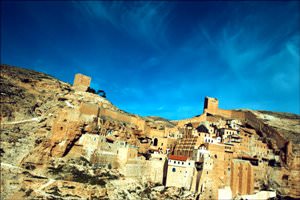 Distance from Al-Karak center - 67.8 km.
Like many ancient monasteries, Mar Saba is far from major settlements. It’s situated in the dead area of the Judean Desert, the so-called Valley of Fire. The only opportunity to visit this unique religious landmark is to have a long trip through the vast desert. Women don’t have to refuse from the experience, as there are several viewing platforms for them around the monastery. … Read further

Search touristic sites on the map of Al-Karak

Sightseeing in regions nearby Al-Karak

Madaba
The church built in honor of Saint George is one of the main attractions of the city. There was a Byzantine temple in this area before. The shrine was built in the 6th century. After the earthquake, the church, just like the rest of the city, turned into ruins. The building remained in this disastrous condition for more than a thousand years. Christian pilgrims managed to not ... Open »
Jericho
Christian pilgrims from all over the world arrive in Jericho in order to visit Mount Quarantania or Mount of Temptation, the height of which is nearly four hundred meters. The ascension to the mountain starts from the main city ruins. Does the path look too complicated? No problem, there is a cable car that will take you to the top fast. The view from the top of the mount is ... Open »
Jerusalem
This wonderful city was founded 4 thousand years ago, and even nowadays it never stops amazing travellers by its splendor, rich choice of sights and unforgettable atmosphere of harmony. Jerusalem is one of the world’s largest religious centers, and it attracts people of different religions – Muslims, Christians and Arabians. Just like the majority of ancient cities, ... Open »
Amman
Amman is an amazingly attractive city, which harmoniously combines old traditions of the antiquity and modern lifestyle. The history of this city has started over ten thousand years ago. At that time this place was known as Rabat Amon and was the capital city of Amon princedom. A bit later the city was conquered and ruled by the Romans and Amman was considered the territory of ... Open »
Nablus
It is a well-known fact that this settlement is very old, and the region is often mentioned in the Bible. The name of the city sounds as Shechem in Hebrew, and this is the term that the Bible uses to describe this region. According to the sacred book, this was an ancient Canaanite and then Hivite city, but sons of Jacob Simeon and Levi destroyed the Hivite settlement because ... Open »
Petach Tikva
Just like any old town, Petach Tikva is full of remarkable places and historical monuments, which attract travelers from other countries. One of the most well-known landmarks of this place is Tel Mulabis Mound. The archeological excavations don’t stop here even nowadays. They have revealed many artifacts from the first settlement (the Romans lived here in the prehistoric ... Open »

All about Al-Karak, Jordan - sightseeings, attractions, touristic spots, architecture, history, culture and cuisine. Prepare your trip together with OrangeSmile.com - find out the 'must see' things in Al-Karak, which places to visit, which excursions to take, where the breathtaking views are waiting for you. Planning your trip with this travel guide will help your to get the most out of Al-Karak in few days.