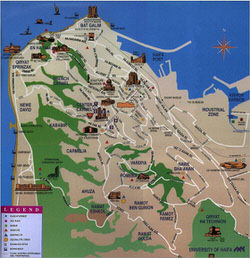 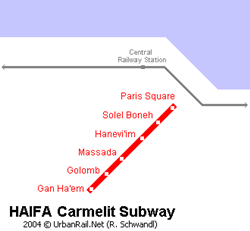 Interactive maps of hiking and biking routes around Haifa

1. You can zoom in/out using your mouse wheel, as well as move the map of Haifa with your mouse.
2. This interactive map presents two modes: 'Biking Routes' and 'Hiking Routes'. Use the '+' button on the map to switch between them.

This Haifa map has two modes: 'Railway Network' and 'Landscape & Rural Map'. Use the '+' button on the map to navigate.

Overview of festivals and celebrations in Israel

With the participation of theatricals of Jewish and Arab origin, the “Masrahid” monodrama festival is regularly held in the city of Akko. During the event, festive performances are staged by theater directors from Israel, Palestine and other Arab countries. They often become a launching pad for young actors and are a place for exchange of opinions by famous playwrights. In the process of celebrating, high-level political and societal problems are discussed. Every year, the International Puppet Theater and Film Festival is organized in Holon. The festival unites many puppet shows and films, creative workshops for children and other events. The largest dance event in Israel is the Karmiel Dance Festival, which brings together dancers from all over the world to participate in concerts of ethnic and folkloric dance, classical and modern, jazz, hip-hop, etc. … Open

Our guide to Haifa

You should definitely take a stroll through the picturesque Moshava Germanit district; its main symbols are Templars’ houses. In the second half of the 19th century on the site of the present district a small German settlement was founded. Some old buildings have preserved to this day; they have recently undergone a complete renovation. The Museum of Haifa would tell visitors of the city more about this and … Open

Fans of shopping also point out Fleamarket, as there are lots of boutiques and shops on its territory. You can buy clothes and gifts at very attractive prices at this market. Fans of nightlife won’t be disappointed too. Despite the fact that Haifa doesn’t feature an abundance of noisy nightclubs, a number of popular bars and restaurants offer an interesting evening program. The Glasgow pub will be … Open

The Voila specializes in European dishes; it is one of the most popular dining places in the city. The restaurant features a large selection of homemade cakes and highly artistic desserts, soups and salads. It serves excellent Italian pizza and delicious dishes of French and Swiss cuisine. The Voila restaurant has a decent wine list. Among city's cafes Aroma is worth noting; a large selection of salads and … Open

Traditions and mentality of Haifa

During pre-holiday rituals, the bride and groom are always accompanied by experienced guides who know all the national traditions. Despite the fact that during the wedding ceremony the new married couple has to comply with strict traditions, local weddings have some breadth. The couple can choose the venue to feast; their wedding dresses are limited only by decencies. Before the wedding, the groom has to go … Open

In one of the fascinating historical buildings is the Mane Katz Museum located. It is devoted to the famous avant-garde artist's masterpieces. The main exhibits of the museum are famous artist’s paintings drawn in different techniques. The museum also houses the collection of his personal belongings. One of the most unusual cultural venues here is the Tikotin Museum of Japanese Art opened in 1959. The … Open

9. At any time of the day taxi service is available for vacationers; you can call the car by phone or stop it on the street. It's worth noting that in the period from 9:00 pm to 5:30 am the night-time tariff is used, so the trip will cost about 25% more than during the day. 8. The most profitable way to call other cities and countries is to use street phone booths. They accept special plastic cards that can be … Open