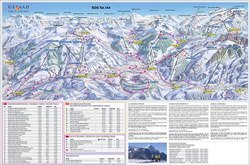 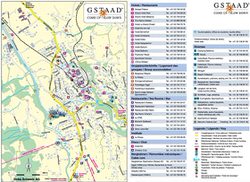 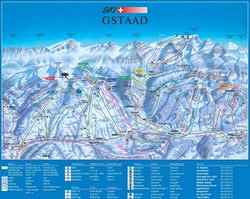 Interactive maps of hiking and biking routes around Gstaad

1. You can zoom in/out using your mouse wheel, as well as move the map of Gstaad with your mouse.
2. This interactive map presents two modes: 'Biking Routes' and 'Hiking Routes'. Use the '+' button on the map to switch between them.

This Gstaad map has two modes: 'Railway Network' and 'Landscape & Rural Map'. Use the '+' button on the map to navigate.

Our guide to Gstaad

Gstaad started developing as a tourist destination in 1577. This is when the first hotel opened here. Later, the first mountain ski paths were made not far from the village. It was clear that the area was perfectly suitable for mountain sports. The resort became increasingly popular year after year. Tourists from all over the world were visiting this place in order to spend their vacation in a calm place with warm … Open

Maps of Adelboden-Lenk
Several amusements parks work in the region in summer, and Adventure Park Adelboden is one of them. This is a wonderful place to test strength and dexterity. This is a rope village built in a picturesque area. If you have always wanted to try rope routes and zip wires, like climbing trees, and are a fan of extreme activities, this is a must-visit destination for you. The ... Open »
Maps of Crans-Montana
Those who want to feel part of a team would be happy to visit Paintball Valais where, as the name implies, they can try out paintball. It'd be especially useful to spend time in this way if you're traveling with friends or family - this is how trusting relationship between loved ones can be improved. Salle d'escalade Moubra is designed for those who dream of climbing but ... Open »
Maps of Montreux
People having a sweet tooth should visit the chocolate Caller factory in Montreux. Here, the best Swiss chocolate is produced. It is appreciated by gourmets and sweet-tooth people from all over the world. Several years ago, the factory became available for tours. Everyone can see the process of the production of legendary Swiss chocolate. The tasting of sweets is an integral ... Open »
Maps of Interlaken
In the most popular center specializing in escape quests, Mystery Rooms, visitors can reveal the secret of a captain and find a treasure or simply play board games together with friends. This pastime is very popular not only with tourists but also with locals. Heidi's Photo Chalet, in its turn, is mostly popular with travelers because every vacationer wants to get a beautiful ... Open »
Maps of Bern
Some of the facilities ideally suited for visiting with kids are Spielplatz Laengmuur, Bimano (designed for the smallest tourists), as well as Bernaqua Water Park. By the way, the complex not only offers amazing sliding experience but also good fitness opportunities. People who cannot imagine their holidays without escape quests (or those wishing to try out this type of ... Open »
Maps of Zermatt
Fans of elite sports will be pleased to relax in the Matterhorn Golf Club. This club is open in an incredibly gorgeous area – a picturesque valley surrounded by mountain ranges. Besides the first-class golf course, Matterhorn has some great places to relax. Therefore, visitors can easily spend a whole day there, enjoying the comfortable atmosphere. The Gornergrat Bahn ... Open »
OrangeSmile.com - online travel reservation expert providing reliable car rental and hotel booking services. We feature more than 25.000 destinations with 12.000 rental offices and 200.000 hotels worldwide.
Secure Server