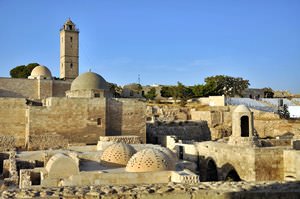 A big part of the historic district and many architectural landmarks in Aleppo were destroyed during the war years. Nevertheless, some signature attractions have survived to this day. Start your acquaintance with the city with a visit to the Christian Quarter. This part of the city was established yet in the 16th century. Many houses that tourists can see today in the Christian Quarter were built more than 300 years ago.
Shopping in Aleppo - main shopping streets, outlets and boutiques
Start your shopping in Aleppo with a walk in the old city bazaars. Many markets were destroyed during the war years. Today, Al-Madina Souq is the most attractive market in the city. It is …

Open
Centuries ago, Christian communities lived in this part of the city, giving the name to the quarter. Today, tourists can see several old churches and luxurious residences here. The Museum of Popular Arts And Traditions is open in one of the beautiful and eye-catching historic buildings. Visit this establishment to see collections of unique crafts and antique artworks. Christian Quarter remains one of the major tourist destinations in Aleppo. Many historic buildings were transformed into hotels, restaurants, and shops.
The Citadel of Aleppo is one of the main and most famous historic symbols of the city. The fortification is old – built in the mid-10th century, the age of the Citadel of Aleppo is more than one thousand years. The citadel protected the city yet during the crusades. This is a large architectural complex. Fabulous palaces and mosques appeared in the territory of the stronghold in the Middle Ages. The citadel was the location of the armoury and numerous warehouses. In fact, the entire city was located inside the citadel. The first buildings outside the citadel wall appeared here only in the 16th century. Today, the Citadel of Aleppo is a renowned historic landmark of the international level. It survived in multiple battles but the fortress suffered much damage in 1828 because of a devastating earthquake. The restoration works in some parts of the citadel haven’t ended up to the present moment. Copyright www.orangesmile.com
Guide to Aleppo sightseeing - things to see and to visit
Aleppo is one of the oldest cities in the world and the most populous city in Syria. Many historic attractions of Aleppo are UNESCO World Heritage Sites. Famous archaeological sites in the …

Open
You can visit some interesting archaeological and historic sites in Aleppo suburbs. The ghost town of Resafa is one of the most inimitable attractions of Syria. This ancient settlement is located not far from Aleppo. Resafa was a powerful and prosperous town until the 13th century. Today, fragments of the sumptuous old buildings remind of that period. In the 13th century, the sultan ordered all residents of Resafa to move to another city, and the gorgeous settlement became abandoned in a matter of days. As dunes surround the historic site, Resafa buildings became hidden in the sand over the centuries. If you visit this ghost town, you will be able to see old buildings made from incredibly attractive pink-shaded limestone. The ghost town looks particularly attractive at sunset. 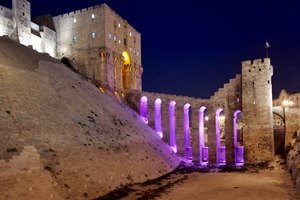 Other abandoned ancient towns of Serjilla and Al Bara are no less interesting to visit. They are located close to each other, so the two settlements are usually visited during one excursion. Serjilla and Al Bara were founded more than one thousand and fifty hundred years ago. They reached their peak in development in the 4th century. At that time, there were many olive groves and manufactories that processed olives here. Ancient Romans established the first settlements in this region. During an excursion here, tourists have an opportunity to observe the ruins of ancient baths.
Your active city break in Aleppo. Attractions, recreation and entertainment - best places to spend your day and night here
Tourists mostly visit Aleppo in search of historic attractions and visits to picturesque oriental bazaars. The choice of interesting activities is not as rich here as in many other tourist …

Open
Old factories that processed olives are one of the most interesting elements of the archaeological site. The settlement of Al Bara is primarily famous for the pyramid-shaped Byzantine tombs that are located here. Scientists discovered an underground necropolis in this settlement, as well as ruins of several monasteries and churches. The two towns became abandoned approximately in the 7th century. Many buildings were destroyed during numerous earthquakes. 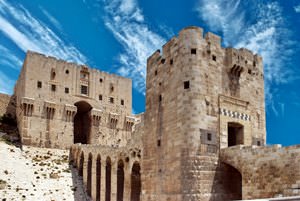 There are several interesting cultural centers in the vicinity of Aleppo, and the Mosaic Museum is one of them. This famous cultural establishment is open in the picturesque town of Maarat an Numan. The museum’s exhibition features an interesting collection of ancient mosaics. Some of them were made yet during the Ancient Rome and Byzantine periods. The age of some mosaics is approximately one thousand and fifty hundred years. The mosaics were brought from the abandoned nearby settlements. The gorgeous artworks immortalized mythological and historic events that were important for that time. Besides the mosaics, the museum exhibits other precious archaeological findings. Take a look at a collection of ancient pottery and household items, fragments of old tombs and sarcophagi. The building, in which the museum is open, is an important historic landmark. Finished in the 16th century, the building was initially a caravanserai that was popular with rich merchants and noble travelers.

This guide to cultural sights Aleppo is protected by the copyright law. You can re-publish this content with mandatory attribution: direct and active hyperlink to www.orangesmile.com.
Aleppo - guide chapters 1 2 3 4
Reference information
Map of all art museums

Art galleries in Aleppo and around
♥   Art museum 'National Museum of Aleppo' Aleppo, 1.4 km from the center. On the map

Photogallery of cultural heritage of Aleppo

Excursions over cultural sights of neighbours of Aleppo

Beirut
Sursock museum occupies the building of a beautiful old mansion. This is a private museum founded by a Libyan scientist Nicolas Ibrahim Sursock. The museum was opened in 1912, but it became available for free attendance only in 1961. The spacious rooms of the museum store approximately five thousand works of art. It should be noted that the design of the museum itself deserves ... Open »
Damascus
Umayyad Mosque is an important excursion site, which is recommended for visiting for all travelers. The halls of the mosque keep a precious religious artifact - the head of St. John the Baptist. Every year hundreds of thousands of pilgrims come to the city to worship the sacred relic. Salah al-Din Mausoleum is a no less remarkable religious object. It was named after the great ... Open »
Famagusta
In the Middle Ages, the cathedral was converted into a mosque by Turkish invaders; it has received its current name relatively recently, in 1954. At the entrance to the cathedral there is the most important natural landmark, an ancient fig tree. It’s supposed that it was planted during the construction. The must see sight is the St. Barnabas Monastery. Since the late ... Open »
Ayia Napa
I you want to get acquainted with the history of the city, an excursion to the local museum will be the best decision. A large of the museum’s exhibition is devoted to a huge collection of prehistoric weapons, which have been found by archaeologists in the vicinity of Ayia Napa. Some artifacts among the tools present there belong to the Bronze Age. Travelers from all over ... Open »
Larnaca
Several ancient mosques have preserved in the city; Al Kebir is the most beautiful among them. Built in 1835, it has never been subjected to major renovation; formerly an old church was located on the site of the mosque. In the immediate vicinity of the city is an important archaeological area, where excavations are held until these days. Here, archaeologists have discovered ... Open »
Nicosia
Travelers interested in the history of the Christian religion should never ignore the Byzantine Museum. Its main exhibits are 48 ancient icons that were brought here from all over the country. Not long ago, the museum's collection was replenished with 230 more icons of a later period. Most of them were created at the turn of the 18th-19th century. Besides the icons, you can ... Open »

Culture guide to Aleppo. Which fascinating sights to visit once you are in Aleppo: temples, churches, museums, theaters and castles. Recommendations (with addresses, phone numbers and links) on the places 'must visit' in Aleppo. Plan your own city excursion by using this page info!