Vatican’s Library remains one of the most mysterious attractions of the city-state. Many believe that this library keeps many unique ancient books and manuscripts with crucial information about the birth of human civilization. Another legend suggests that a part of the unique Great Library of Alexandria is hidden in the winding halls of the library. Only the most famous and prominent scientists can visit the library. Tourists can only admire the beauty of the building from the outside.
Unique sights of Vatican from our series 'Extreme places on Earth'
These spots really worth the attention of a real traveler-researcher. …
Read further
It takes more than one day to explore the grandiose residence of the Pope. This is a large complex of buildings. The large palace consisting of multiple buildings has more than a thousand rooms, many of which are open for guests. Museums occupy a part of the marvelous palace. There are interesting museums dedicated to history and Egyptian art, as well as several picture galleries. Finally, a beautiful landscaped garden with sculptures and flowerbeds is a true jewel in the crown of the gorgeous complex.

Saint Peter’s Square is a starting point of many excursions in Vatican. This square was built yet in the 17th century. There is an important historic landmark in the middle of this square – an Egyptian obelisk delivered to Rome by order of Caligula. Several beautiful fountains with antique sculptures decorate the square. Saint Peter’s Square is surrounded by magnificent old buildings of different epochs.
Unique sights of Vatican from our series 'Extreme places on Earth'
These spots really worth the attention of a real traveler-researcher. …
Read further
Saint Peter’s Basilica is one of the most visited landmarks of Vatican City. The first small basilica was built on this site yet in the 4th century. It is believed that the basilica was erected near the tomb of Saint Peter. The building of the grandiose cathedral that tourists can see today started in the 16th century and was completely finished in 1626. Best architects and painters of Europe worked over this project. Inside, the basilica is decorated with frescoes by Raphael, Bernini, and Michelangelo.

Don’t forget to take a stroll in picturesque Vatican gardens and take a look at the artificially made Grotta di Lourdes. It was built at the beginning of the 20th century by order of Pope Pius IX. The beautiful cave, the entrance to which is covered by green plants, is a precise replica of the Lourdes Grotto in France.
Unique sights of Vatican from our series 'Extreme places on Earth'
These spots really worth the attention of a real traveler-researcher. …
Read further
As Vatican is situated in Rome, it is possible to reach it by public transport from any neighborhood of the Italian capital. The small city-state has its own railway station, and so trains from different Italian cities arrive at it every day. Many streets in Vatican City are pedestrian-only, so it is not very comfortable to drive a car here.

This article about iconic landmarks and sights of Vatican is protected by the copyright law. You can re-use the content, but only under the condition of placement of an active link to www.orangesmile.com.

Famous and uniques places in Vatican from our review series 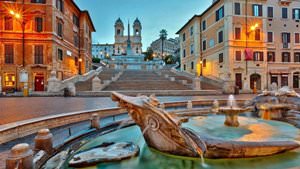 The unique historical sightseeing of Rome and Vatican City are also in the list of the UNESCO Heritage Site. A great number of Roman historical sightseeing is known all over the world. Roman Forum, Colosseum, Pantheon and Emperors Forum are the most popular antique landmarks. Millions of tourists come to see them year by year.

Vatican City is a separate architectural and historical landmark. Basilica di S. Maria Maggiore is a place where most excursions begin. It attracts with its outstanding mosaic decoration and wonderful paintings of the 17th century. Basilica di San Giovanni in Laterano is another interesting landmark of Vatican City. At first, it was mentioned at the beginning of the 4th century. This cathedral has a lot of historical facts.

Saint Petes Basilica is the most … Read all 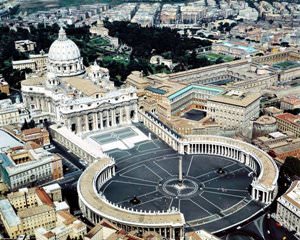 Vatican, which is the smallest state in the world, is a unique attraction itself. Its main landmark is the amazing St. Peter’s Basilica and a square of the same name in front of it. That’s an important monument not only in terms of religion; it’s also a stunning example of architecture and art. Walls of the cathedral hide priceless artistic masterpieces, including unique Pieta by Michelangelo.  At every step you can see the beautiful sculptures, elements of artistic painting and decoration items made of precious metals.

Tens of thousands of people annually visits the St. Peter’s Basilica. Those are not only pilgrims but also ordinary tourists who want to admire amazing murals, which were created many hundreds of years ago, altars, and incredible sculptures. Today, St. Peter’s … Read all

The Vatican has been associated with religious ceremonies and Catholic traditions for several centuries. The landmark of the sovereign state city is a wonderful St. Peter's Basilica. The construction site of the cathedral was not chosen by chance. In ancient times there were the circus gardens of Neron, where according to the legend of the Apostles Peter found the martyrdom. The first religious building was erected on the cathedral site in the period of Emperor Constantine. The first temple existed for more than a thousand years.

The construction of the cathedral, which can be seen today, was finished in 1626. The majestic St. Peter's Basilica is a unique complex with the large square of the same name, and is the largest construction in Vatican. The Cathedral can receive 60,000 … Read all
All unique sightseeing Vatican