Cultural sightseeing in US Virgin Islands. What to visit - museums, temples, castles and palaces 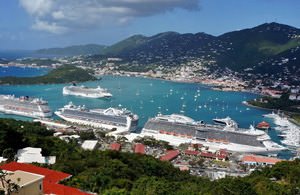 The U.S. Virgin Islands are a group of three islands in the Caribbean Sea: Saint Croix – the smallest, Saint John - the medium-sized, and Saint Thomas – the biggest one. The majority of tourists come to the islands to enjoy a beach vacation. The islands have a well-developed infrastructure. Besides that, tourists can enjoy sightseeing, visiting local museums, and participating in interesting excursions. Among the most notable landmarks of the islands, it is important to mention the underground fort, oceanarium, sugarcane plantations, and rum distillery. In short, everyone can find a landmark to fit own taste. Each island has car rental offices.
Shopping in US Virgin Islands - best shopping places, what to buy?
The U.S. Virgin Islands are well-known as a paradise for shoppers. Duty-free goods attract tourists no less than warm sea and white sand. Perhaps, …
Read further
Saint Croix is the southernmost island in the group of the U.S. Virgin Islands. Its surface doesn’t have big elevations. There are small hills on the north that slowly turn to a valley on the south. Sugarcane plantations and stone mills are the most famous landmarks of this island. Christiansted is a true gem of Saint Croix. In this town, tourists can attend the Historic Museum, Art Gallery, Botanical Garden, and Rum Distillery to learn more about the process of making rum. Natural landmarks of Saint Croix: forest sceneries, picturesque shores, and tranquil lagoons created by coral reefs. This is a great place to forget about stressful modern lifestyle. The national park agency preserves the pristine nature of the island.
Saint Thomas has the most developed tourist infrastructure. What should tourists visit here? The island is located on the way of ships that head to the Panama Canal. It is one of a few islands in the Caribbean Sea that has a deep and comfortable harbor. Saint Thomas is a duty-free zone. Large cruise ships frequently arrive here, so don’t be surprised to find a well-developed tourist infrastructure with numerous hotels, shops, and restaurants. Charlotte Amalie, the capital of the island, is the most crowded and mesmerizing place. Before entering the main harbor of the island, ships pass two small islands by. One island, Hassel Island, has a nature reserve. The other island is the location of beaches, botanic gardens (open to visitors every day), and an underground fort that is open for excursions. Copyright www.orangesmile.com
When and where to 'hang out' in US Virgin Islands - festivals and celebrations
Every country has its own holidays, and the U.S. Virgin Islands, as a part of the United States of America, share many holidays with the continental …
Read further
The capital got its name in 1691 after the wife of King Christian V of Denmark. The history of the city started thirty years earlier, in 1672, when Fort Christian was built here. The fort protected the settlement from pirates and prevented them from entering the harbor. Initially, the fort served several purposes: a fortress, church, governmental building, and public meeting place. Nowadays, this is the main landmark of the city. The fort is open starting from 8 to 16:30 on weekdays and to 15:00 on Saturday. Sunday is the day off. 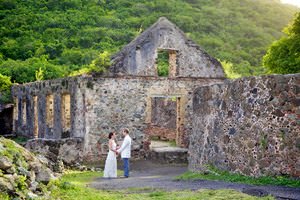 What else can Charlotte Amalie offer to its guests? The city has many interesting landmarks that are worth the attention of tourists: the St. Thomas Historical Trust Museum, Governor’s House (18th century), Emancipation Garden (1848), and Weibel Museum with an interesting exhibition dedicated to a three-century-long stay of Europeans on the islands. Many buildings have a long history. For example, this is the location of the oldest synagogue in America that was founded by Spanish Jews. The building that tourists can see now was built in 1833 on the site of the previous synagogue that burnt down in 1796.
For active traveler - national parks, landscapes and nature of US Virgin Islands
A vacation on the U.S. Virgin Islands – St. Thomas, St. John, and St. Croix – is quite expensive, but it is very pleasant to get acquainted with …
Read further
Not far from the fort, on the Government Hill, tourists will find one more fabulous landmark – the Blackbeard's Castle. This is a fortress that dates back to the 17th century. It is particularly interesting to visit the castle because there is a legend that the owner of this castle in the 19th century was a fierce pirate who became the prototype of a malicious fairy tale character – Bluebeard. It is interesting to visit the Government Hill because of one more landmark – the 99 Steps. The top of this staircase offers a breathtaking panoramic view of the harbor and the nearby streets. After that, it is high time to visit the Art Museum that exhibits works of famous local artists and the Frederic Lutheran Church built in 1850. 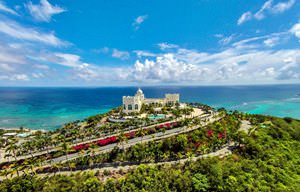 When enjoying a vacation on Saint Thomas, it is simply impossible to fail to visit the town of Red Hook. This is a popular anchor hub of the island, so there are always many yachts from the East Coast of the United States. Despite its small size, the town has many restaurants and shops. Coral reefs protect coastal waters from strong sea currents and form many charming bays such as Smith Bay, Coki Point, Hull Bay, Saint John Bay, Nazareth Bay, Magens Bay, Bolongo Bay, and many more. They are not only popular entertainment and water sports areas but also stunning natural landmarks. At Coki Point, vacationers should also visit the Coral Work Ocean Park, a marine-themed park with the famous underwater observatory, a large aquarium with turtles and iguanas, and a tunnel with transparent walls. This tunnel takes visitors to a sunken tanker that slowly turned into a manmade reef.
US Virgin Islands sightseeing - top places to visit
Many tourists know this island country in the Caribbean Sea as a center of beach recreation and water sports. This is a true magnet for all fans of …
Read further
What should tourists see in St. John? Saint John is the smallest of the three islands. A volcano with a height of 364 meters forms the center of the island. Its slopes slowly reach the water, forming many charming bays. A beautiful tropical forest occupies two-thirds of the island’s territory. There are almost no forests anymore on the other two islands, but they still exist on Saint John because cutting trees is prohibited here – the Virgin Islands National Park occupies the majority of the island’s territory. Vacationers can join excursions to this national park. Besides gorgeous nature, there are also partially destroyed buildings of the sugar factory that dates back to the 18th century.

This article about cultural sites of US Virgin Islands is protected by the copyright law. You can re-use the content, but only under the condition of placement of an active link to www.orangesmile.com.
US Virgin Islands guide chapters 1 2 3 4 5 6 7 8 9 10