Sightseeing in Charlotte Amalie - what to see. Complete travel guide The Virgin Islands are a true gem of the Caribbean. The fabulous city of Charlotte Amalie is the main destination on the islands. This settlement is the capital of the U.S. Virgin Islands. The charming resort city is situated on the largest island of the group, Saint Thomas. Nowadays, Charlotte Amalie is a popular tourist destination that attracts guests from all over the world. Tourists from different countries arrive to sunbathe in the rays of the Caribbean sun, enjoy swimming in warm water, and admire the natural beauty of this region.
The information about the first settlers on Saint Thomas dates back to the period when Christopher Columbus made his second journey. These were several American Indian tribes, such as the Taino, Arawaks, and Caribs. However, Charlotte Amalie started developing after the region had established business relations with Dutch colonies in the West Indies. Charlotte Amalie as a town has existed since 1671. This is when Dutch King Christian V made an order to found a new settlement. Initially, the city had another name – Taphus. This word means “beer house” in Dutch. Twenty years later, the city changed its name to Charlotte Amalie to honor Christian V’s wife.
It was decided to build Fort Christian at the beginning of the 70s of the 17th century in the coastal part of the city in order to protect the haven from invaders. Cane sugar manufacture and slave trade were the main sources of income in the budget of the city. The 19th century became the period of prosperity and development in Charlotte Amalie as the city became a stop on a sea route connecting North and South America. The United States bought the Virgin Islands at the beginning of the 20th century, and Charlotte Amalie became the capital of the new region. Copyright www.orangesmile.com
One of the most beautiful beach resorts on the islands is situated not far from the city. This is Magens Bay Beach, an incredibly beautiful bay covered with soft white sand. Tropical trees grow at the borders of the coastal area, separating the beach from the rest of the city. Volcanic rocks with the porous structure add a special charm to this enchanting area. Scattered in the territory of the beach, these rocks together with crystal clear water of the Caribbean Sea create a unique look that Magens Bay Beach is famous for. Do you like active recreation? In this case, Magens Bay Beach is the best choice. Vacationers can choose from different water sports and entertaining activities and enjoy unforgettable emotions. The beach is suitable for scuba diving, so vacationers can see the underwater world of the region and creatures that live there. It is also possible to play tennis on comfortable courts, explore the area on horses, or polish golf skills.
If you like not only looking at sea creatures but also participating in competitions, sports fishing might be exactly what you are searching for. Besides that, it is possible not to dive deep underwater but to snorkel with a mask and goggles. Vacationers can always rent all equipment they need directly at the beach. That being said, sailing remains the most popular activity that all tourists adore. It is even possible to compete with others and see who the most skilled sailor is. 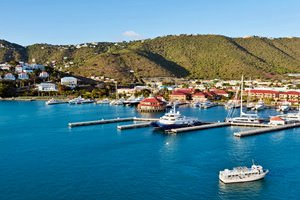 Besides pleasant beach recreation, tourists have an amazing opportunity to attend various interesting events. The annual carnival in Charlotte Amalie is one of them. If you arrive in the city in April, you can see the main carnival on the islands. This is the time when masquerades and various dancing shows take place in the city. As the Virgin Islands are a U.S. territory, typical holidays in the States such as St. Patrick’s Day are also adopted here. If you happen to visit Charlotte Amalie at this time of the year, you can attend a blues festival.
Guests of the city can book different interesting activities. For example, they can make an airplane excursion. This is a fast and comfortable way to see the beauty of the Virgin Islands. Such a flight will definitely leave many pleasant and unforgettable memories. You can also take a look at the city and the bay from above if you use the Paradise Point skyride that will take you to one of the adjacent hills. This area is also famous for its parrot show that regularly takes place at the top. The performance entertains both kids and their parents. Note that you need to have cash in small denominations to give tips to owners of the birds. After that, the parrots give short performances. The city doesn’t fall asleep at night, and so vacationers can continue entertaining in nightclubs and bars. There is an international airport in Charlotte Amalie that accommodates both international and domestic flights. Upon arrival at the airport, take a bus or taxi to the city center. The distance is short. It is also possible to reach Charlotte Amalie from other Virgin Islands by ferry, cruise liner or ship. This way will be not long as well because there are regular ferries between the islands.
This guide to iconic landmarks and sights of Charlotte Amalie is protected by the copyright law. You can re-publish this content with mandatory attribution: direct and active hyperlink to www.orangesmile.com.

City tours, excursions and tickets in Charlotte Amalie and surroundings

National and city parks around Charlotte Amalie
♥   National Park 'Virgin Islands' , 19.2 km from the center. On the map

Sights around Charlotte Amalie from our guide 'Extreme places on Earth' Distance from Charlotte Amalie center - 20.9 km.
At present more than 75% isotritritium is declared as a protective zone. Construction on this territory is forbidden. Caneel Bay is the only modern health resort on the Protected Trail. The recovery on the luxury resorts of Saint John attracts the world famous celebrities, who want to hide themselves from the intrusive paparazzi. Today, about 4,000 people live permanently on the island. More than half of the island population lives in the tiny and peculiar capital - Cruz Bay. … Read further

Sightseeing in US Virgin Islands: things to see

Besides the capital, it is worth visiting the small town of Red Hook on Saint Thomas Island. It is well-known far beyond the borders of the country thanks to its miraculous Coral World Ocean Park. In this park, there are an interesting observatory, an aquarium with a transparent tunnel, and several halls with interesting thematic exhibitions. Not far from the ocean park, tourists will find attractive beaches that are particularly popular with fans of scuba diving. … Open

Search touristic sites on the map of Charlotte Amalie

Sightseeing in regions nearby Charlotte Amalie

Tortola
Road Town is the capital of the island. It is here, that the most visited cultural centers and historical sites are located. The most attractive place for hiking in the capital will be Old Main Street that encompasses unique architectural monuments of different eras. All ancient buildings are carefully restored. Nowadays, they accommodate restaurants, stores and gift shops. ... Open »
Ponce
While walking through the streets of the city you can see the ancient churches and picturesque squares, fountains, and decorated colonial buildings. The central square is called Las Delicias, and the majority of cultural institutions and monuments of this place are located around it. The center of the square is the location of the Cathedral of Lady of Guadeloupe; the slender ... Open »
Saint Martin
Life on St. Maarten is in constant motion. Here are located the mansions of well-known movie stars, beautiful sandy beaches, amazingly clear and pure water around the island that amazes all tourists. Here tourists are offered to try underwater fishing and diving, swim to amazing coral reefs, and even climb to the Eden Mount. The town is also famous for its attractions. Start ... Open »
Long Bay
Water sports centers are also available on local beaches. Here, everyone can go diving, try water skiing and other water activities. Boat trips of all kinds remain very popular among resort guests. They organize romantic cruises, during which you can listen to live music while tasting exquisite delicacies. Curious tourists will be offered tours along the coast of Antigua ... Open »
Antigua Island
In addition to abundance of interesting attractions to explore, Antigua differs with well-developed tourist infrastructure. There is everything you need for a comfortable stay, from first-class hotels and restaurants to stylish nightclubs and casinos. The island's capital is the city of St. John's; its historic district deserves special attention of excursions fans. A striking ... Open »
Punta Cana
Bavaro Beach is a sand area that is comfortable for swimming and sunbathing. The coastal water is shallow near the beach, and the depth increases slowly, so this beach is great for families. You can relax with your loved ones and do not worry about your child. Tall palm trees on the beach provide the necessary shadow – it is very pleasant to hide behind them in the midst of ... Open »

All about Charlotte Amalie, US Virgin Islands - sightseeings, attractions, touristic spots, architecture, history, culture and cuisine. Prepare your trip together with OrangeSmile.com - find out the 'must see' things in Charlotte Amalie, which places to visit, which excursions to take, where the breathtaking views are waiting for you. Planning your trip with this travel guide will help your to get the most out of Charlotte Amalie in few days.