Detailed hi-res maps of Tobago Island for download or print 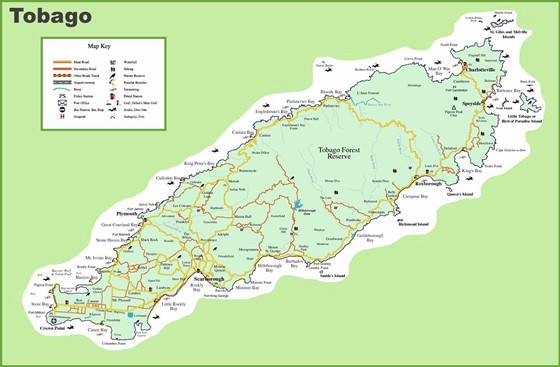 Moving around in Trinidad and Tobago - transportation

Over the past 40 years, the transport interchange in Trinidad and Tobago has improved considerably. Significant state and foreign investments were made in the development of transport infrastructure. Despite the specific terrain and basic geographical structure of the country, a diverse transport network covers almost all remote regions and provinces. The length of roads is more than 8,500 kilometers, and approximately 4,000 kilometers has high quality modern asphalt surface. There are markings on such roads, but there are few road signs here, and often they are understandable only to the local population. … Open

Economy roadmap of Trinidad and Tobago

The main means of internal transportation in the country is road transport. The total length of roads is more than 8,000 kilometers, of which half has high-quality hard surface. In addition, there are 6 airports in the country, as well as a lot of runways for helicopters and small aircrafts. There are also a lot of seaports on the islands. As a result of the hot climate of the country and the exotic flora and fauna on the territory, tourism receives large development. The government today is trying in every way to stimulate the development of this sector by offering benefits and favorable tax deals. However, it is the opinion of the State Administration that the tourism sector in the country at the moment has not reached the desired level and cannot compete with the most famous island resorts in the world. … Open

Search for services, infrastructure and sights on map of Tobago Island

Our guide chapters over Tobago Island

The island of Tobago has long become a favorite destination for all fans of beach recreation and diving. Crown Point is recognized as the most developed resort. Tourists will find various centers specializing in water sports there. There is also a big and comfortable beach that has several rental offices offering a range of gear and equipment. There are many beautiful coral reefs not far from the coastline. Both … Open

Tobago Island for children - what to visit

Tobago could not boast to have big amusement parks, children centers, aqua parks, and other modern leisure activities for the little travelers. However, a curious child will like this place, because a tropical island can leave an impression for life. No Disneyland attractions could compare to real nature and the true culture of islanders. Remember that any child will like the place, if his parents like it. So if you … Open

If you decided to visit Tobago during the colorful Carnival, be prepared that the prices will go right through the roof. The difference can reach up to 70% from the initial price! This is definitely not the best time to do your shopping. The good news is, it is common in Tobago to bargain anywhere, where there is no cash register. Remember, the sellers here, unlike in Asia, do not consider the argument about the … Open

A choice of beautiful beaches and bays on the island is just huge, and many of them are among the best in the Caribbean. A decent selection of attractive beaches is represented in close proximity to the airport; one of the most popular is Speyside area. Travelers who like to relax at quiet and fully equipped beaches like the Kings Bay. The coast features infrastructure making it a pleasant exception to the rule; … Open

Traditions and mentality of Tobago Island

The first thing that should be mentioned, is that, despite some stereotypes, Tobago does not depend on tourism. GDP here is one of the highest among Central and South America’s countries. The country’s incomes come from oil and gas production. That is why in many aspects Tobago reminds of a European country, but at the same time, everything looks like the territory of Latin America. So the locals are … Open

It seems as if the cuisine of Tobago borrowed the traditions of all the other countries in the world. At the heart of the local cuisine lie the traditions from China, Europe, and India, peculiarly combined with different findings of Creole, African, and Mediterranean origin, which eventually give this unique taste to each dish. Local restaurants will offer you traditional, typical for this region, Creole courses … Open