Sightseeing in Grenadines - what to see. Complete travel guide 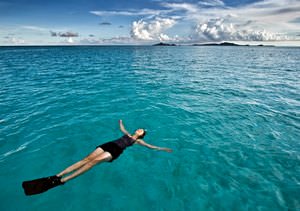 St. Vincent Island is the largest island of the country Saint Vincent and the Grenadines in the Caribbean. The discoverer of the island is considered Christopher Columbus, who landed on its shore in 1498. According to scientists, the first settlements on the island appeared 5,5 thousand years earlier, as evidenced by numerous archeological finds. In 1980 and 1986, the island was badly damaged by affecting hurricanes. Nowadays, tourist infrastructure of Saint Vincent is actively developing and improving.
Excursion over cultural sights of Grenadines - 'must visit' points of interest
The island was settled no less than 5,5 thousand years ago. The Ciboney Indians were the first ones who came here from the north part of South America. Even though there is almost no …

Open
The island presents itself as a center of elite recreation. Its resorts are characterized by high ecological indicators. To its guests Saint Vincent is ready to offer luxurious resort hotels. There are excellent conditions for outdoor activities. Lovers of excursions will definitely not be bored. They can visit unique archaeological areas and get acquainted with natural attractions on the island.
The capital of the island is the city of Kingstown. It is very beautiful and ideal for hiking. The port area of the capital is a focus of attraction of hundreds of tourists. The most popular entertainment facilities, stores and handicraft shops are concentrated in the neighbourhood. Walking around the port district, you can see many beautiful buildings of colonial times. An important feature of the capital is an abundance of religious attractions. Copyright www.orangesmile.com
Your active city break in Grenadines. Attractions, recreation and entertainment - best places to spend your day and night here
Active volcano La Soufrière (1234m high) – which is currently not – can be justly called one of the most fascinating sights of the island. It’s located in the north part of Saint …

Open
Here, a beautiful Cathedral of St. Mary is preserved, the construction of which took place in the beginning of the 19th century. The building was seriously damaged due to destructive elements. In 1930, the cathedral was completely restored and remained unchanged since then. It is incredibly interesting from an architectural point of view. Composed of dark volcanic blocks, it represents an amazing combination of Gothic, Moorish and Romanesque styles. 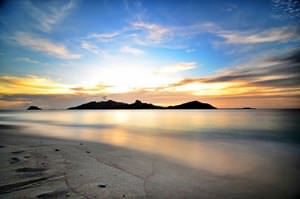 St. George's Cathedral is a true glimpse of the Gregorian style. Its construction was completed in the early 19th century. It is in its walls, that a unique relic presented by Queen Victoria - a Red Angel stained-glass window is kept. Among other unusual sights of the capital, the Botanical Garden is worth noting. The garden was founded in 1762 by William Bilai. The incoming captain decided to establish a commercial garden nursery on these fertile lands. Exotic plants were brought here from all corners of the world.
Best beaches and recreation areas around Grenadines
Saint Vincent is one of the best places in the world for diving and snorkeling. Even those who prefer a serene beach holiday will definitely like the beautiful island. Many places of the …

Open
A popular pedestrian route - Bukament-Valley-Vermont-Neyche-Trail - begins in the immediate vicinity of the capital. It passes through incredibly beautiful rainforests, banana groves and volcanic ridges, encompassing many interesting for studying natural attractions. The most important landmark is an active volcano La Soufriere. Its height is 1234 meters. The ascent to the volcano's mouth remains one of the favourite entertainments for active tourists. 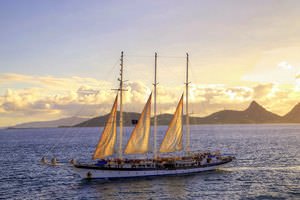 Those who want to diversify their leisure by visiting unusual excursions, should examine the Black Point Tunnel. This tunnel, 115 meters long, was built by slaves in the early 19th century and is located in the immediate vicinity of Kingstown. The construction of the tunnel was caused by the need to create a direct route between the capital and sugar plantations. Among the archaeological areas, Buccament Bay is worth mentioning. On the nearby rocks, scientists have discovered Celtic drawings and petroglyphs. One of the stones with prehistoric patterns is located right on the coast.
Top hotels in Grenadines for business trip or short vacation
High-class resort hotels on the St. Vincent Island are available for travelers. All the local hotels were built not so long ago, so they will be pleased for admirers of modern luxury and …

Open
For many years, St. Vincent Island remains the regular location of different international music festivals. The island is not distinguished by the unique nature, so local authorities decided to make its cultural program more diversified in order to attract more tourists. Several times a year, famous musicians and performers visit the small island. Several interesting events and national celebrations take place in the first part of February. This is the time of a colorful carnival that is reminiscent of the carnival in Brazil. 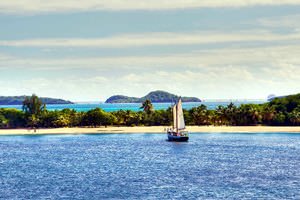 Festive procession is the main part of the carnival. It takes a year to prepare all fancy costumes for the event. The festival’s schedule includes various musical performances, contests, gastronomic entertainments, and competitions. Visiting local markets is one of the most popular pastimes among tourists. Vacationers are usually interested in popular national delicacies and exotic fruits. Local artisans also bring their works to the markets, so tourists will not have any trouble finding interesting and unique souvenirs. Finally, local markets offer beach and sports gear.

This guide to iconic landmarks and sights of Grenadines is protected by the copyright law. You can re-publish this content with mandatory attribution: direct and active hyperlink to www.orangesmile.com.
Grenadines - guide chapters 1 2 3 4 5 6 7 8 9

City tours, excursions and tickets in Grenadines and surroundings

National and city parks around Grenadines
♥   Recreation Area 'Rabacca River Recreation Park' , 65.3 km from the center. On the map

Sights around Grenadines from our guide 'Extreme places on Earth' 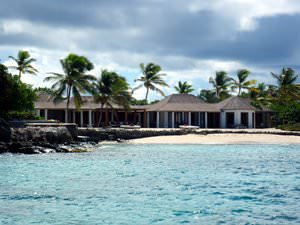 Distance from Grenadines center - 24.2 km.
In the adjacent territory there is an excellent tennis court and the open swimming pool with jacuzzi, and one of the best recreation areas is the billiard room. At the disposal of the rich travelers, who spend few days in the magnificent villa of Mick Jagger, are the services of the personal chef and the housekeeper. The gardener ensures a faultless condition of the exotic garden. The charming and romantic villa has its own sea access and is often chosen by newlyweds for honeymoon. … Read further 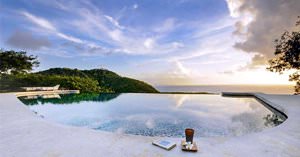 Distance from Grenadines center - 23.4 km.
Although it has been many years ago, all the baron's references were strictly observed. On the island you can really only find 114 buildings. With the development of the tourist infrastructure, all the modern supply lines were laid out on the island, but all of them are hidden under the earth and therefore do not hurt the natural splendor. On the island there are no big hotels with a hectic atmosphere. At the disposal of the holidaymakers are the picturesque villas, the splendid beaches and the unique restaurants - the pride of the peculiar Mustique island. … Read further

Sightseeing in Saint Vincent and Grenadines: things to see

Saint Vincent is the largest island of the country. The capital, Kingstown, and the majority of population live there. Apart from leisure rest, the island is a great place for hiking. Travellers are welcome to make a journey to the La Soufriere volcano. It’s a tall active volcano, a walk on which will not be an easy task, but the panoramic views are very rewarding. … Open 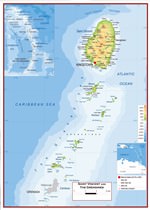 Search touristic sites on the map of Grenadines

Sightseeing in regions nearby Grenadines

Kingstown
The design of this church is an interesting combination of several styles. If you are a connoisseur of architecture, you will notice traces of the Mauritian, Georgian, and Roman styles. The gorgeous façade made with volcanic black bricks is one of the most eye-catching details of this church. The cathedral has lush décor with skillfully made bas-reliefs, stucco, and ... Open »
Castries
The city of Castries was founded by the French. This important event took place in 1650. However, the United Kingdom established its authority in the region in 1814. In 1979, an incredibly important event happened here. Castries has finally become independent. Thanks to the new status, the city became the capital of Saint Lucia. The city started developing actively. ... Open »
Tobago Island
The Caribbean island of Tobago began attracting attention of tourists a few years ago. Today that’s one of the most rapidly developing and progressive beach resorts. The main attractive features of the island are lush tropical forests, an abundance of pristine beaches and unique underwater world. Since the second half of the 18th century, the town of Scarborough has being the ... Open »
Bridgetown
The island is often called “A Small England”, because the locals have adopted many traditions from the British people. The most popular sports here are polo, golf and cricket – typical English entertainments. One more distinct trait of the country is in special wedding traditions. Organizing a wedding on Barbados is considered prestigious and luxurious. Here you will ... Open »
Fort De France
Amazingly beautiful unspoiled nature, picturesque sandy beaches and tropical bushes have quickly started attracting tourists, so starting from the 80s of the 20th century Fort De France has also become a famous center of recreation. Beautiful mountains and volcanoes attract active rest fans as here you can make a multi-day excursion to beautiful foothills. The rise to Mont ... Open »
Diamant
The ruins of the local castle are considered one of the main sights of the town. The castle was built in the 18th century by Tiberius Carafa – a famous leader and politician. The building of the castle was the first step towards the development of the city. The old part of Diamant keeps several other buildings created in 18-19 centuries. All buildings are considered amazing ... Open »

All about Grenadines, Saint Vincent and Grenadines - sightseeings, attractions, touristic spots, architecture, history, culture and cuisine. Prepare your trip together with OrangeSmile.com - find out the 'must see' things in Grenadines, which places to visit, which excursions to take, where the breathtaking views are waiting for you. Planning your trip with this travel guide will help your to get the most out of Grenadines in few days.