Sightseeing in Muscat - what to see. Complete travel guide

Muscat is one of the most important and oldest cities of the Arabian Peninsula. This is also the capital of Oman. Muscat is located on the coast, which has been an important destination since ancient times. Due to its advantageous geographical position through Muscat were transported exotic materials to the Roman Empire. After the capture of this territory by Portugal in the XVI century Muscat became the raw carrier for this country. Due to such history Muscat has embodied the culture of Arab, Portuguese, and Indo-European peoples. You can see old buildings, mosques, forts, and narrow lanes everywhere in Muscat. They make even greater contrast with buildings of modern times like shopping centers and business areas.
Authentic traditions, festivals and lifestyle of Muscat inhabitants
Local people are rather sociable and hospitable, they are respective and attentive towards foreign guests and are eagerly interested in traditions and culture of foreign visitors. City …

Open
Ruwi and Matra are two well-known districts of the capital of Oman. Ruwi is a business capital, and Matra is famous for its ancient buildings, historical monuments, parks, gardens and authentic Arab shops. Amazing mango groves of Muscat are one more sight of this place as they were grown over 200 years ago.
Among other well-known attractions of this place are the Mirani and Jalali forts, which were built by the Portuguese in the XVI century. Karume Park is one of the most wonderful and enchanting parks of Muscat. It was opened in 1993. The territory of the park is notable for numerous waterfalls, lakes and fountains. The main feature of the Riyam park is a statue of a large incense burner in the center of it. Such places as Qaboos Ben Seida Palace, Sultan Qaboos Mosque, and Mattra Faure Fortress are definitely worth your attention. Copyright www.orangesmile.com
Excursion over cultural sights of Muscat - 'must visit' points of interest
Muscat features numerous historical and cultural landmarks and sights which will turn the city exploration into an unforgettable experience full of impressions and feelings. The main symbol …

Open
You can have a good time in Muscat. There are many types of recreation here, such as diving, shopping in local bazars, beautiful sandy beaches, and much more.

A unique architectural monument is the Al Alam Palace. Despite the fact that it was built in compliance with all national traditions, the palace looks incredibly impressive and original. This palace was built relatively recently, in 1972. It was erected as a ceremonial palace for the Sultan. Tourists are not allowed to enter the palace, but everyone can look at it. A beautiful playground with a garden was built around the palace. Here, there is a direct descent to the sea.

The city has many beautiful mosques. An interesting monument is the Sultan Qaboos Grand Mosque. It was built in 1992, but the mosque looks much more impressive than other modern monuments. The main building material for the construction of the mosque was sandstone. A unique decoration of the interior of the mosque is considered to be the unique Persian carpet which was made by hand, and weighs more than 20 tons. This mosque is very large. It can accommodate up to 20,000 believers at a time.
Your active city break in Muscat. Attractions, recreation and entertainment - best places to spend your day and night here
Muscat boasts various entertainments to meet each taste and fancy of the visitors. Tourists should definitely visit one of the local beaches. Local folks do not feel enthused for beach …

Open
Fans of excursions in picturesque natural places will have an opportunity to visit the famous thermal springs Al-Taura. They are located in the immediate vicinity of Muscat, surrounded by extensive palm plantations and farming settlements. These picturesque places were equipped with beautiful fonts and pools, close to which were dense exotic thickets. Next to the springs are modern leisure centers, so you can relax here all day. 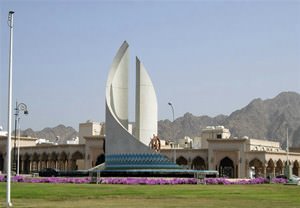 In the vicinity of Muscat, there is an ancient Nakhal Fort. It was built in the 17th century on the site of earlier fortifications, which were completely destroyed. This fortress is notable for the fact that throughout its history, it has never participated in battles. Thanks to this, it managed to preserve not only a unique exterior, but also a beautiful interior decoration. During the tour, tourists will have the opportunity to visit the most hidden corners of the fortress.
Advices to travellers: what you should know while being in Muscat
1. Before a journey to the city of Muscat one should thoroughly learn the main rules and regulations of local culture as this will let the tourists escape unwanted misconceptions and …

Open
A unique attraction is the ancient village Misfat al-Abrin, which was built on the rocks in the vicinity of Muscat, in the Middle Ages. Here unique houses that are more than 500 years old, as well as ancient channels of water supply which still function are preserved.

This guide to iconic landmarks and sights of Muscat is protected by the copyright law. You can re-publish this content with mandatory attribution: direct and active hyperlink to www.orangesmile.com.
Muscat - guide chapters 1 2 3 4 5 6 7 8 9

City tours, excursions and tickets in Muscat and surroundings

Sights around Muscat from our guide 'Extreme places on Earth' 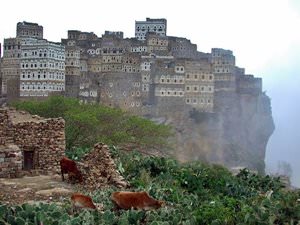 Distance from Muscat center - 111.9 km.
Over the years the town had lost its status, and now it attracts travellers with its calm and peaceful atmosphere. Al-Hajjarah Village is usually included in the observing excursion of the mountain region. These places have not only historical and architectural but also nature landmarks. The climate of the region is not good. There aren’t many plants because of the arid climate. Meanwhile, a great number of locals grow there a chilli pepper. In the local shop, you can buy spices of the highest quality – the most popular souvenir among tourists. … Read further

Sightseeing in Oman: things to see

Simply no Arabian town can exist without a colorful bazaar. Of course, there is a big bazaar in Muscat as well - it's called Muttrah Souk. The market is conventionally divided into several areas, each of which sells a particular type of a good: incenses, jewelry, silverware, furniture and carpets, clothes, spices, souvenirs and toys. The Al Alam Palace is also worth attention of travelers. The royal palace was built in 1927; currently, the palace is a so-called work office of the sultan - the serving head of the country. Despite the fact that it's prohibited to enter the palace, there are always many people on the square in front of it. Numerous locals and travellers come here to see and take photos of the beautiful building. … Open

Search touristic sites on the map of Muscat

Sightseeing in regions nearby Muscat

Fujairah
The city is really rich in beautiful sculptures and fountains. This place is not overloaded with massive skyscrapers, making it even more comfortable for high quality rest. Despite the small age of the emirate, here have remained really many historical monuments. The ancient fort is surely the most famous of them. Local museums exhibit a collection of artifacts discovered by ... Open »
Dubai Region
Dubai can boast the largest religious structure in the country, Jumeirah Mosque, the landmark of world importance. This is a true example of Arab religious architecture affecting not only with its impressive appearance, but also with chic decor. This beautiful mosque is free to visit, which isn’t common to Muslim places of worship, so absolutely everyone can admire its ... Open »
Masirah
The western part of the island has become home to 300 species of birds. It's hard to imagine that in this small area of land can exist tiny birds, graceful flamingos, and predators. Beaches on the east coast attract lovers of water sports. There are quite strong continuous waves here. Divers fit in to this area, since the Gulf of Masirah is a location of incredibly beautiful ... Open »
Ras al Khaimah
Today, fertile lands are covered with spacious plantations. Visitors of the emirate have an opportunity to walk along picturesque orchards. Of particular interest for vacationers is a coastal zone of the emirate. The total length of beaches of Ras al-Khaimah is more than 60 kilometers. Almost all plots of the coast are built up with large hotels. The coastline of the emirate ... Open »
Ajman
For many years, Ajman was the leader in pearl fishery until Japan outperformed it. The technology of pearl cultivation drastically changed prices for pearls, causing great revenue losses for the emirate. 1950 marked the start of a new epoch for the history of Ajman as Sheikh Rashid bin Humayd Al Nuaimi became the ruler of the area. The city started developing, and so many ... Open »
Sharjah
The ancient buildings are carefully restored. One can’t simply fail to visit local coral exhibitions. Besides this, Ajman Fort is the location of a museum, which exhibits wonderful relics of the past. Beautiful and modern hotels in Sharjah simply do not require any advertising. You will not find better service in this region, perhaps, even in Europe. The modern exhibition ... Open »

All about Muscat, Oman - sightseeings, attractions, touristic spots, architecture, history, culture and cuisine. Prepare your trip together with OrangeSmile.com - find out the 'must see' things in Muscat, which places to visit, which excursions to take, where the breathtaking views are waiting for you. Planning your trip with this travel guide will help your to get the most out of Muscat in few days.