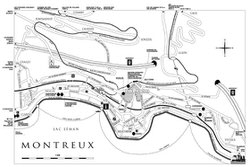 Interactive maps of hiking and biking routes around Montreux

1. You can zoom in/out using your mouse wheel, as well as move the map of Montreux with your mouse.
2. This interactive map presents two modes: 'Biking Routes' and 'Hiking Routes'. Use the '+' button on the map to switch between them.

This Montreux map has two modes: 'Railway Network' and 'Landscape & Rural Map'. Use the '+' button on the map to navigate.

Our guide to Montreux

Active rest fans will certainly enjoy leisure walks in the mountains; some of the routes imply an overnight stay in a mobile camp. Each year new sports complexes are opened in the resort area, so vacationers have an opportunity to visit tennis courts, try in water skiing or visit the city’s hippodrome. Evening program can be diversified by visiting restaurants and cafes. As wine industry is booming in the … Open

Montreux will impress travelers with a variety of historic attractions. The most spectacular historic symbol of the city is Château-de-Chillon. The castle was built on the rock that rises above peaceful Lake Geneva. The historic building is connected to the bank with a small bridge. At one time, the castle served as a defensive construction located near the strategically important road. It was built in the 12th … Open

Montreux is a perfect place for active recreation. It will impress especially nature admirers and hikers. Not far from the city, there is a famous botanical garden named Rambertia. It is located in a beautiful mountain area. In the garden, you can see hundreds of alpine plants, including rare ones. In recent years, the collection of the botanical garden has been significantly expanded. Now, it includes plants brought … Open

One of the family holidays is Christmas. Traditionally, it is celebrated over the festive table in the family circle. During the Christmas period, no fiery shows or other entertainments are held outside. The locals celebrate this holiday at home. Tourists should visit the city a few weeks before Christmas when they can visit traditional fairs. At this time, the citizens prepare for the holiday. They buy their … Open