Have you ever seen how exotic fruits grow? Do you know how the breadfruit tree grows and how it tastes? Could it be that you have always dreamt of seeing beautiful coral reefs? The Marshall Islands offer all these and many other incredible vacation opportunities for its guests. Fans of diving, fishing, trekking, and active recreation make up the majority of visitors to the islands. Indeed, the Marshall Islands are perfectly suitable for all these.
Unique sights of Marshall Islands from our series 'Extreme places on Earth'
These spots really worth the attention of a real traveler-researcher. …
Read further
Scientists assume that the archipelago became inhabited more than 2,000 years ago, and people from South East Asia were the first settlers on the Marshall Islands. There is not much information about the early history of the islands, first official mentions date back to 1526. This is the year when Spanish explorer Alonso de Salazar and his crew visited the archipelago. Despite such a notable discovery, Spanish colonizers didn’t have much interest in the islands, so the newly discovered land didn’t have any name for 200 more years. British explorer John Marshall visited the islands in 1788. Later, the islands got their name after him.
Great Britain also didn’t hurry to build settlements on the islands, so the first country that did that was Germany in the 60s of the 19th century. The islands belonged to Germany for several decades until Japan claimed the territory in World War I. The Marshall Islands became a territory of the United States only during World War II – American army made a military base on the islands that had an important strategic position. Later, the United States used some islands of the archipelago for nuclear weapon tests. The Marshall Islands became a partially autonomous territory in 1979, turning into a fully independent country in 1986. Copyright www.orangesmile.com
Unique sights of Marshall Islands from our series 'Extreme places on Earth'
These spots really worth the attention of a real traveler-researcher. …
Read further
Majuro Atoll is the most populated part of the island country. It consists of 57 small islands that provide space for more than half of all the population of the Marshall Islands. This is exactly where tourists should look for high-class hotels and entertainment establishments, as well as interesting landmarks. Alele Museum & Public Library is one of the venues that tourists enjoy visiting. The exhibition of this museum is dedicated to the history of the Marshall Islands and the culture of its people. Among the items in this museum, tourists can see handmade canoe, different traditional craftworks, old naval maps, and weapons used by local people centuries ago.

Laura Village is an interesting attraction situated on the atoll. The lifestyle in this settlement has remained unchanged for hundreds of years. There is an interesting sorgo factory in the area, and tourists can visit it. Moreover, there are several interesting war memorials in the village – the Japanese built them in the memory of deceased soldiers.
Unique sights of Marshall Islands from our series 'Extreme places on Earth'
These spots really worth the attention of a real traveler-researcher. …
Read further
Do you want to relax at a deserted beach or enjoy fishing? Picturesque Arno Atoll is a fantastic choice then. This atoll is famous for its picturesque beaches with white sand and marvelous coral reefs. The coastal waters near this atoll are ideal for diving and snorkeling. Arno also attracts fishing enthusiasts. Nearby coral reefs attract different species of fish, and so fishermen can polish their skills and try to catch marlin or sailfish.

Kwajalein Atoll is a special part of the Marshall Islands. Just like many years ago, the United States use this atoll for missile testing in accordance with the agreement with the government of the country. The US Army chose these islands as the final destination of intercontinental ballistic missiles that are launched at the military base in California. Islanders offer interesting entertainment to all tourists – to watch from a safe distance how the deadly missiles crash into the atoll. As this happens mostly at night, explosions from the missiles look even more spectacular.
Unique sights of Marshall Islands from our series 'Extreme places on Earth'
These spots really worth the attention of a real traveler-researcher. …
Read further
Are you interested in war history? In this case, don’t forget to visit Mili Atoll. There was Japan’s military base on this atoll in World War II. The Japanese left many weapons and vehicles here after the war. It is still possible to see rusty airplanes and protective buildings in certain parts of the atoll. There are several old bunkers that tourists can enter.

There are two international airports on the Marshall Islands. They are situated on Majuro and Kwajalein atolls. As a rule, these airports accommodate flights from Australia’s Brisbane and from Nadi airport situated in Fiji. Continental offers flights to the Marshall Islands from Honolulu and Guam. Finally, it is possible to reach the archipelago by sea – many cruise liners arrive in port cities of the islands.

This article about iconic landmarks and sights of Marshall Islands is protected by the copyright law. You can re-use the content, but only under the condition of placement of an active link to www.orangesmile.com.

Famous and uniques places in Marshall Islands from our review series 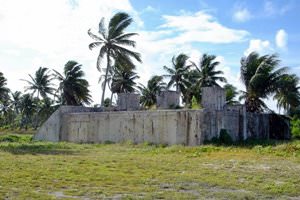 Bikini Atoll is a part of Marshall Islands, from the distance it resembles a real tropical paradise. There you can walk along the seaside, look at slim palms and fell the atmosphere of isolation. However, the surface beauty and safety of these isolated islands are rather deceptive. The Atoll is the very dangerous place because of the high level of radiation. For a number of years, the USA used Bikini Atoll for nuclear tests.

When the nuclear experiments have begun the locals still lived there. Within the shortest possible time, more than a thousand people died from different decreases. People who were quickly evacuated from this place after the nuclear poison also died. The most known test that was made there was in 1954. The Castle Bravo bomb which power is 15 megatons was exploded. … Read all 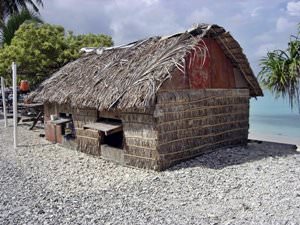 Laura Village is an island situated in the Marshall Islands. This village is also in a list of the most underpopulated places in the world. At approximately 3 meters above sea level, Laura has the highest elevation of any islands in the Majuro Atoll. The main landmark of Laura Village is the same-named beach with the crystal-clear water and tiny white sand.

This island has different places of interest, that’s why travellers won’t get bored there. In the village, you can visit two old churches and a public school. People live there as their ancestors hundred years ago. As earlier, the village has small wooden on piles cabins. About 200 people live on this island. Locals got used to foreign guests and like to tell them about their outstanding traditions. Some of them are older than 2 … Read all 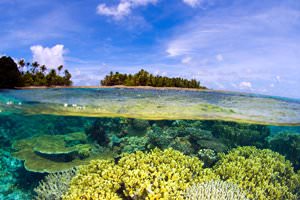 The Marshall Islands, located in the boundless Pacific, have long been popular with the followers of the recreation in the exotic places. The archipelago of the Bikini Atoll is considered an incredibly dangerous recreation site. Atoll has not gained this reputation because of the strong undercurrents or dangerous sea-dwellers. In 1946, the United States chose this magical island as a nuclear test site. For 12 years the hydrogen and atomic bombs on the island have been tested.

During this period the Atoll has experienced more than 65 experiments. Nowadays the high radiation level is the main danger for the islanders and the tourists. It must be noted that Bikini Atoll was still inhabited before the trials. People live here today. After the beginning of the military experiments, the local … Read all
All unique sightseeing Marshall Islands