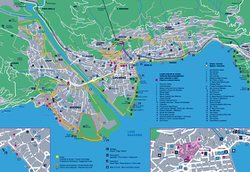 Interactive maps of hiking and biking routes around Locarno

1. You can zoom in/out using your mouse wheel, as well as move the map of Locarno with your mouse.
2. This interactive map presents two modes: 'Biking Routes' and 'Hiking Routes'. Use the '+' button on the map to switch between them.

This Locarno map has two modes: 'Railway Network' and 'Landscape & Rural Map'. Use the '+' button on the map to navigate.

Our guide to Locarno

Locarno is a city located on the shore of Lake Maggiore at the foot of the Alpine ridge. The second name of this place is "City of Peace." Locarno got this name after the international agreement about peace had been signed here in 1925. Another reason for this name is in the fact Locarno is a magnificent lakeside recreation area full of beautiful subtropical parks. International Film Festival traditionally takes … Open

Locarno is an astonishing city with hot Italian temper. The first reference about the city dates back to the 8th century. The city has preserved the historical landmarks of different epochs. Locarno suburbs will unveil the ruins of ancient castles. One of the most stunning historical landmarks is considered to be the church Madonna del Sasso. It is set on the top of the high cliff dominating the city and enjoying the … Open

Locarno is a good chance for active leisure enthusiasts. The city boasts scenic natural areas, a variety of entertainment centers and shops. Travelers eager to view the natural landmarks of the area should take a tour Centovalli Railway. The Centovalli train route will go through the most picturesque places. Travelers will find out many interesting facts of the ancient city history during the tour. On-water … Open

Ethnic cuisine of Locarno is a traditional fondue, fragrant wines and simple but rich dishes. The city boasts gastronomic establishments of different trends that is why choosing a proper restaurant meeting the taste and fancy of every traveler will not turn to a great challenge. The Pizza restaurant Primavera is of great popularity among tourists and city guests. Its menu presents a few varieties of the popular … Open

Townspeople are big fans of such holidays and always take an active part in them. Their behavior may even seem strange to many foreigners since it is not at all associated with the restrained nature of local residents. Here, it is extremely rare to witness excessive emotions or see people chatting with each other in crowded places. All communication usually takes place in a more secluded and less crowded setting. … Open