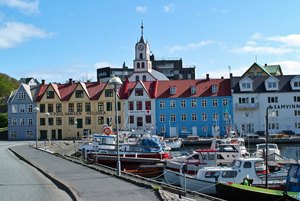 Despite the fact that the Faroe archipelago consist of dozens of islands, the transport infrastructure in the country is developed at a high level. Tourists have the opportunity to comfortably and conveniently travel not only across the territory of one island, but also within the whole archipelago. To date, there are more than five hundred kilometers of roads with hard surface and about 10 kilometers of unpaved roads on the territory of the islands. It was thanks to the roads that land transportation in the archipelago began to develop actively. The most popular type of public transport is buses. They are in the department of one of the two largest transportation companies, which paint their vehicles in blue and red. The quality of the buses are quite good, almost all of them are made by Volvo.
The soul of Faroe Islands - religions and languages
The Faroe Islands have two official state languages, which are Danish and Faroese. The study of the Danish language was a prerequisite to get an …
Read further
It is worth noting that regular buses run not only within the territory of one island, but also throughout the archipelago. This became possible due to the collaboration of land and sea transport. Buses get on ferries which are sent to any island, and once on land, again continue to move. For one trip there can be 3-4 ferry transfers. As a result of this, the bus fares are quite high. A trip by bus on an underwater tunnel or over the bridge will also attract an additional fee. Please note that buses run around major cities and carry passengers absolutely free of charge. There are only 4 bus lines, and the buses leave the main station every 30 minutes. These buses are closed on weekends, evenings and on holidays. 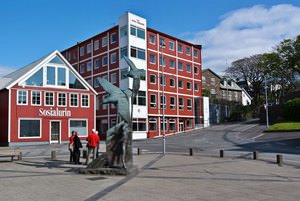 It is possible to travel around the island by taxi. In addition to ferries, water transport is also represented by ships, yachts, boats and pleasure boats. It is worth noting that the islands in the archipelago are very close to each other and there are tunnel and bridges between the most of them. The air transport network is also quite well developed in the Faroe Islands. The best way to travel by air is by helicopter flight. Almost every major island has an airfield for helicopters. Despite this, there is just one fully equipped airport on the islands. It is called Vagar. Due to the difficult mountainous terrain of the Faroe Islands, there is no railway interchange, trams and trolleybuses.

To date, only one airport operates on the territory of the Faroe Islands, which is called Vagar Airport. It is located on the Vagar Island, near the village of Sorvagur. The history of this airport has its roots since the beginning of the Second World War. The British built a runway here during the occupation of these islands. However, the airport was abandoned after the war and began to function only from 1963. It should be noted that from this time there was an asphalt runway on its territory, the length of which was 1,250 meters. As a result, the airport could only accept airplanes of a shorter design. Nevertheless, 7 years ago the government carried out reconstruction, and the length of the runway was increased by 550 meters. Copyright www.orangesmile.com
State construction and political life of Faroe Islands
The Faroe Islands are an autonomous country of the Kingdom of Denmark. However, since 1948 the islands have received privileges for self-government. …
Read further
Generally, the airport does not accept major international flights, and is connected with the largest countries in Europe only by charter flights. The airport’s infrastructure is quite developed. On its territory there is a large and spacious waiting room, several cafes and restaurants where you can try amazing local cuisine, small bars, currency exchange offices, an international bank branch and a small conference hall. On the territory of the terminal there is a large duty-free shop with an area of 450 square meters. Here you can buy branded perfumes, cosmetics and spirits. 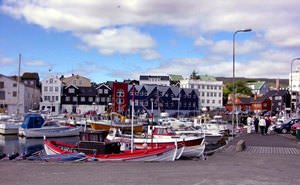 On the second floor of the station, there is a special room for passengers traveling with children. Here you will find nursery rooms, a small children’s library, as well as toys. You can also prepare children’s food here by yourself. You will find it interesting to note that no additional fee is charged for the use of the children’s room. On the first floor of the terminal there is a medical center where specialists are on duty around the clock. Directly at the airport, you can book a transfer or even a taxi. It should be noted that the airport to date, operates not only for international transportation, but also as an air harbor for domestic movement. However, in this case, not airplanes are used, but helicopters. Due to the fact that the government regularly finances domestic air transportation, the cost of flying on a helicopter is quite affordable for every citizen of the country, as well as for tourists. 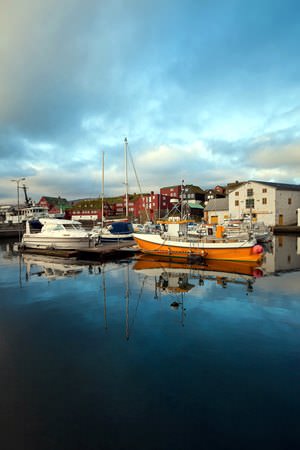 Transportation on the territory of the Faroe Islands and between the individual islands of the archipelago is well developed. The most popular type of public transport is buses. It should be noted that four absolutely free trips ply the territory of major cities, and depart from the stations every half hour. If you are planning a trip to another island, buses get on ferries and as a result of this the cost of the ticket increases significantly. The entire vehicle fleet is in a fairly good, technically sound condition. Consequently passengers should expect a comfortable and fast trip. Besides this, you can ride between the islands on a bus through underwater tunnels and bridges. Such a service will also attract an additional fee. If you intend to travel to several islands of the archipelago, it is best to purchase a tourist card “Travel”. It allows you to save considerably. Thanks to it, you can travel both by bus and ferry, except for the voyages to the island of Mykines.
Faroe Islands sightseeing - top places to visit
The history of the Faroe Islands started yet in the 9th century, but only in the 20th century the islands became independent and nowadays are …
Read further
If there is a need to quickly bridge the distance within a particular island, you can take a taxi. They can be caught right on the street or booked over the phone. There are car rental agencies on some islands. And, despite the fact that roads on the islands are of quite decent quality, they are still used by a select few. The fact is that the main cultural and natural attractions are situated close enough to each other within the same island, so you can move between them on free buses or on foot. If you choose to travel by ferry on a rented car, you will have to pay a lot for its transportation. 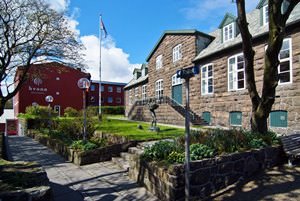 Traveling by air is best on a helicopter. There is a runway for a helicopter almost on each island, and the cost of such a trip is only slightly higher than the cost of a trip by bus, including one by ferry. It should be noted that the ferries cruise between the islands almost every hour. The fare depends on the time of the year, as well as on the chosen direction. Islands in the archipelago are close enough to each other, so often locals offer tourists to use the services of transportation on ship, boats or yachts.

This article about transportation in Faroe Islands is protected by the copyright law. You can re-use the content, but only under the condition of placement of an active link to www.orangesmile.com.
Faroe Islands guide chapters 1 2 3 4 5 6
Country maps 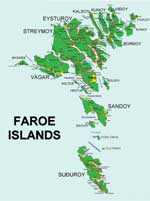