Preparing your trip to Famagusta: advices & hints - things to do and to obey 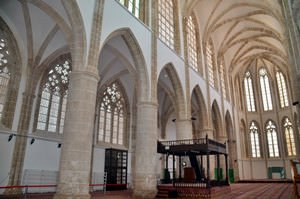 1.The main form of public transport is a bus. Anyway, the bus service in the city is irregular. Hikers will enjoy exploring the city on foot. Those planning to visit neighboring areas are recommended to rent a car.
2. Taxi is an alternative to public transport; you could use its services at any time of the day. The fare has to be negotiated in advance; the most expensive taxi service is offered near the hotel.
3. There are hotels of different price categories in the resort. In the city center you can find elite places and modest hotels that attract tourists with affordable prices.
4. Travelers are advised to use different types of currencies to pay for goods and services. The national currency is the most common, but dollar and euro are used also; latest are taken literally everywhere. In shops and markets you can often see price tags indicating the cost of goods in multiple currencies.
5. It is recommended to exchange money in private exchange offices, as they offer better rates than the banks. It’s recommended to avoid exchange offices located on the hotel territory, as well as services of private individuals. Copyright www.orangesmile.com
6. Shoppers should remember that there are no fixed prices at markets and in private retail stores. It is required to bargain with seller; never rush to buy goods you like in the very first shop. It is likely that the next shop would offer it at a more attractive price.
7. Tipping is customary literally everywhere. It will be enough to add 10% of the total order in restaurants; in spas and beauty salons tip is 20-30%, this amount should be split around the staff. You can leave $1-$1.5 for maid and porter at a hotel.
Guide to Famagusta sightseeing - things to see and to visit
A major port city, this place is known as an international center of commerce and tourism. Famagusta is a city with rich history. First settlers have built homes here already in the …

Open
8. It’s not recommended to drink tap water, as it may significantly worsen the process of acclimatization. For the same reason it isn’t recommended to have drinks with ice, as ordinary tap water is used for latter.
9. Mains voltage is 220 V; some appliances may need adapters. You can ask for them in a hotel or buy at any household store.

Preparing your trip to Famagusta: advices & hints - things to do and to obey You can re-publish this content with mandatory attribution: direct and active hyperlink to www.orangesmile.com.
Famagusta - guide chapters 1 2 3 4 5 6 7

What to visit being in Famagusta - unique sights

Distance from Famagusta center - 11.6 km.
Those hopes have not been realised. Until today Varosha remains a disputed territory, in addition, part of the town is still occupied by a Turkish military base. As mentioned above the town is a closed territory prohibited from entering. Military men are regularly patrolling the streets, but that does not seem to bother curious tourists. The empty coast of the resort looks especially interesting. There have survived umbrellas and lounges from more than forty years ago. One can see the remaining wooden terraces of restaurants and furnished rest areas. … Read further

Distance from Famagusta center - 13.7 km.
Over the years, the city was completely looted. Almost all the buildings on its territory can not be reversed. An access to the city is strictly prohibited and may be life-threatening, because military forces are constantly watching the disputed territory. Modern travelers have an opportunity to admire the town only from behind the barbed wire. Famagusta is quite a big city. The first mention of it dates back to 3 century BC. Once, there was a small village of fishermen. Its golden age occurred in the period from 1960 to 1970. … Read further

Tips for the cities around Famagusta

Ayia Napa
2. Many parts of the city, the center in particular, are pedestrian zones. Rather than renting a car, we suggest renting a bicycle – this is the most common form of transport. 3. Tips are already included in the total amount of the bill in most large restaurants. As a rule, the amount of tips is no more than 10%. 4. Lunch breaks are quite long in vast majority of ... Open »
Larnaca
2. Travelers who expect to devote their holidays to beach entertainment are recommended to visit the island during the period from May to September. Those who expect to spend a lot of time in pedestrian walks and excursions are advised to go to the resort in winter. At this time, the average temperature is around 20 degrees Celsius. 3. Shoppers have to pay attention to ... Open »
Nicosia
2. Summer is not the best time for fans of outdoor activities and active tours. At this time of the year, the air temperature in the shade often exceeds +40 °C, which is uncomfortable for walking. 3. Many interesting attractions can be found in the immediate vicinity of the capital. Tourists can get there by special sightseeing buses or rented car. 4. The historical ... Open »
Limassol
2. Not all landmarks can be reached by public transport, in this case it’s worth to take a taxi. This type of transport is also very popular and isn’t expensive. So, a trip within city will cost travelers about 10-20 euros, depending on the distance. 3. Travelers who need to call other countries are recommended to use street payphones. The quality of communication is ... Open »
Paphos
2. The optimum way to pay for goods and services is national currency which should better be changed prior to a journey. A foreign currency may be denied in stores and restaurants or it may be accepted at a rather unprofitable rate. 3. Foreign guests can exchange currency in one of local banks or private currency exchange offices as well as by means of travel bureaus and post ... Open »
Beirut
2. Choose your clothes carefully before visiting religious sites and attractions of the city. Women should not wear revealing or too tight clothes. Men should not select shorts and T-shirts with short sleeves. Instead of them make your choice in favor of loose pants and a shirt. 3. The travellers, who plan to use a taxi, are recommended to negotiate the cost of a ride in ... Open »

Travelling to Famagusta - advices and tips. What should be provisioned in advance, the rules you might want to follow, and the things you better avoid doing in Famagusta. We help you to make your trip smooth and easy, with no unexpected surprises.