Cultural sightseeing in Dominican Republic. What to visit - museums, temples, castles and palaces 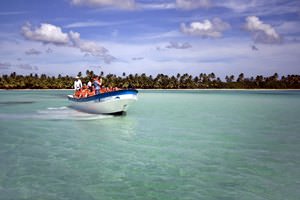 Every year the Dominican Republic attracts a lot of travelers wishing to admire tropical landscapes, sunbathe on one of the many beaches and learn more about the rich history and unique culture of this country. The capital of the Dominican Republic, Santo Domingo, the New World's oldest city, is a real treasure trove of Dominican culture. Its historical center, the colonial city of Santo Domingo (Zona Colonial), is an amazing mix of Dominican modernity and history inscribed on the UNESCO World Heritage List. The oldest buildings here date back to the 16th century, but they mostly lie in ruins. The oldest building in the whole of America, the Dominican Church and Monastery, was built in the 1530s. The church combines elements of Gothic and Baroque styles. Throughout its centuries-old history, the church was repeatedly plundered by pirates, damaged by hurricanes, but this amazing building was rebuilt again and again. Later the monastery was converted into an educational institution.
When and where to 'hang out' in Dominican Republic - festivals and celebrations
The population of the Dominican Republic is multinational and multifaceted. Every Dominican community necessarily has its own festival dedicated to …
Read further
The Museum of Royal Houses' majestic building is located in the colonial center on the corner of Mercedes Street. For four decades, this historical museum has acquainted visitors with the country's colonial period, the way of life and customs of people of that time. Here, in nine interconnected rooms, you can see weapons, documents, and household items with a history dating back over 3 centuries. The museum includes a reading room, a library, a conference hall, and an exhibition hall. Once it housed the Royal Residence and the Government House. The first court of the New World appeared in the same place. It was a place of important meetings and parties attended by prominent figures of the colonial society.
The Columbus Lighthouse in the eastern part of Santo Domingo attracts an endless number of tourists. It's not just a burial place of Christopher Columbus himself built on the site of the first lighthouse but also the subject of endless disputes. So far, it is a mystery whether or not a person resting in the tomb of this monument is Columbus. The construction of the colossal building was completed by 1992, and the body of Columbus who died in 1506 completed its five-hundred-year journey here. In addition to the discoverer of America's tomb, the building has halls with symbols of countries that participated in the construction of the Lighthouse. In the dark, sometimes you can see the cross-shaped beacon light in the sky. The building itself is made in this shape, if you look at it from above. Copyright www.orangesmile.com
For active traveler - national parks, landscapes and nature of Dominican Republic
This may seem surprising, but the Dominican Republic covers 27 climatic zones. That’s why its animate and inanimate nature is so diverse: there are …
Read further
La Romana, the southern port city, is famous not only for the country's best golf courses but also for the village of Altos de Chavon. Walking along its cobbled paths in yards where the wind wanders, passing under stone arches and admiring a magnificent church, it's hard to believe that this place is not more than forty years old. This village built by a Hollywood set designer is an authentic copy of a 15th-century Spanish village. Now, Altos de chavón is an international cultural center, and its wide stone amphitheater can accommodate up to 5 thousand visitors. 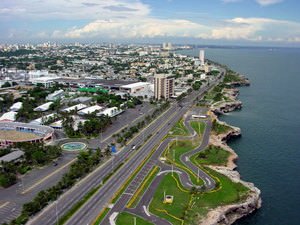 The eastern city of Higüey is famous for the most popular Caribbean Catholic church - the Basilica of La Altagracia. The beautiful building with a unique architecture in the style of modernism can accommodate up to 3 thousand visitors. There is also a palm-lined museum where you can trace the history of the development of religion and culture in the Dominican Republic from the 18th century.
Dominican Republic sightseeing - top places to visit
The Dominican Republic never ceases to amaze its guests with wonderful nature and excellent entertainment. This beautiful country is seemed to have …
Read further
Museo Del Ámbar, or the Amber Museum, is located in the north-eastern city of San Felipe de Puerto Plata. This is a fascinating collection of ancient animals and plants caught up in amber. It should be noted that amber mining in the Dominican Republic has been flourishing for many centuries. In 1970, the Costa family began collecting amber, which was included in the collection of the Amber Museum opened in 1982. The museum presents many beautiful, rare and unique exhibits, the most famous of which is the 42 centimeter-long ancient lizard. The museum shop sells beautiful Dominican amber jewelry.

This article about cultural sites of Dominican Republic is protected by the copyright law. You can re-use the content, but only under the condition of placement of an active link to www.orangesmile.com.
Dominican Republic guide chapters 1 2 3 4 5 6 7 8 9 10

Famous sites of culture and history of Dominican Republic in photoset

Culture and monuments in popular cities of Dominican Republic

Santo Domingo
Close to the landmark tourists will find an eternal fire and the Altar de la Partia being a mausoleum keeping the remains of the founding fathers of the Dominican Republic. This is exactly the place where the independence of the country was announced and the colonial oppression was dethroned. Another remarkable architectural landmark is the building of the Casa del Tostado which is now housing a family museum. For many years the impressive building has been used as the archbishop residence. Not … Read more

Bavaro
If endless food, beach recreation, and bottomless cuba libres start looking a bit boring, it’s high time to visit some of the most prominent landmarks of the region. Curious travelers often head the nearby town of Higüey that is the location of one of the most famous religious landmarks of the country – Basilica de Higüey Nuestra Senora de La Altagracia. The concrete basilica was constructed in 1972. The site of the church is not random – the legendary vision of the Virgin Mary … Read more

La Romana
Visitors to the museum will have a chance to see beautiful historic houses and villas, stroll along cobbled streets and appreciate the decoration of old houses. Altos de Chavon is often called the "City of Artists". Since its foundation, this complex has attracted artists from all over the world, providing them with the opportunity to rent housing and workshops here. The museum has a very interesting art gallery, which contains collections of paintings, sculptures, and other artworks. Most of … Read more