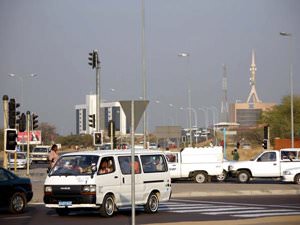 The capital of Botswana - Gaborone, whose population is about 227 thousand people, is at the doorstep of the ecological disaster. Despite the high air pollution level, which is the reason for the numerous industrial companies, Gaborone is still regarded as the popular tourist center. The large industrial city is a location for stock exchanges and banks, car dealers and business centers. The numerous business travelers visit the capital of Botswana every year.
The surroundings of Gaborones is a treasure trove of natural attractions and nature reserves. Eco-tourism enthusiasts know the famous Mokolodi Nature Reserve. The fact that close to the valuable natural objects the large industrial city is located seems to the ecologists just terrible.
The populations of the babuins and ostriches, which can still be seen in the city, suffer from the influence of the bad ecological situation. According to the World Health Organization of 2013, the air pollution level in the capital Botswana has reached 216 points. The critical value is very close. The air has the highest concentration of pollutants in the period from April to October. At this time it is very rarely raining, and the average humidity of the air is about 25%. ... Complete sights collection 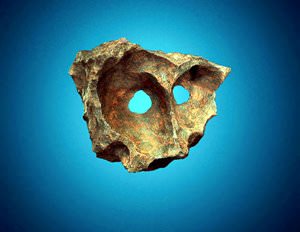 The fact that the meteorites of the different shapes and sizes regularly fall on the earth has long been no longer astonishing. At the same time, not all meteorites are known worldwide. The meteorite of the unusual form, which reminds of the ancient mask, was found in the Kalahari desert by one of the locals.
At first sight, one can hardly guess that the unusual find is the meteorite. It has the whimsical symmetrical shape of the mask with slits for eyes and nose. The high aesthetic value of the meteorite has made it the most valuable artefact of the world. It must be noted that the iron meteorites with openings are not rare. The reason for this is the ordinary erosion.
Some collectors of the meteorites and the researchers believe that 'the mask' is an imprint of the face of the human-like being who has landed in the middle of the desert for unknown reasons. The 'relative' of the unusual iron meteorite is another meteorite with the openings - 'the devil', discovered on the territory of the state of Arizona. His outlines recall the imprint of the head of the unknown being with striking facial features. ... Complete sights collection 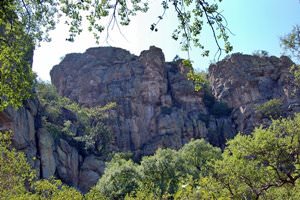 Tsodilo Hills have placed in Ngamiland District, Botswana. More than 30 000 years there has been living the San tribe. Tsodilo Hills is the scarify place for these people. Only in the 1990s, the researchers got interested in these areas. During the hill’s researching there were found several ancient caves. A great number of unique artefacts, that were found there, indicated that earlier these caves were used by primitive people.
Sheila Coulson from the Oslo University has first found these unique caves. The main artefact is the huge stone rock-cut python. Its length is about 6 meters and width 2 meters. The tribe San still worship the python, it is one of the most sacred animals for them. There is a strong possibility that several thousand years ago the locals idolized pythons too.
Also, there were found the tools of primitive people. We can imagine how they carved this sculpture with them. Some of the tools dated more than 70 000 years old. Even more, several parts of the stone wall were found near the sculpture. About 13 000 artefacts were found in the cave on Tsodilo Hills. Among them were spearheads, various ritual artefacts and some stone working tools. However, the ancient cave wasn’t used as a home for primitive men. Scientists think that it was used as a place for major religious place. ... Complete sights collection
This article about unique points of interest in Botswana is protected by the copyright law. You can re-use the content, but only under the condition of placement of an active link to www.orangesmile.com.

All unique landmarks of Botswana on the map 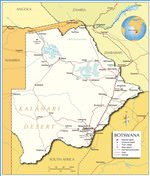 Photogallery of landmarks of Botswana