Sightseeing in Asuncion - what to see. Complete travel guide 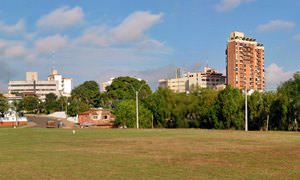 Asuncion is the biggest city in Paraguay. It is situated in the heart of the South American continent. When translated from the local language, the name of the city literally means “Ascension”. The city is worth visiting in order to see the place where many different cultures merged into one. Moreover, the capital of Paraguay attracts numerous guests by its old architectural landmarks that are still in good condition. This is also an outstanding fact for a city in Latin America. As mainstream tourists are usually not much interested in the capital of Paraguay, the city is not very crowded and is perfectly suitable for sightseeing in a cozy and tranquil atmosphere.
Excursion over cultural sights of Asuncion - 'must visit' points of interest
For the people of Asuncion, one of the most significant attractions is the Casa de la Independencia, the oldest building in the city. The beautiful colonial mansion was built in the second …

Open
The history of Asuncion started on August 15, 1537. By the way, this date marks not only the foundation of the city but the birth of the country in general. Spanish conquistadors were exploring the mainland and decided to build a fort here. Slowly, the fort turned into the city of Asuncion that we know now. Since that time, the city has played an important role in the history of the country many times.
The 19th century brought many tragic events to local people. Battles with Argentina, Brazil, and Uruguay took place not far from the capital. Many of these battles were very bloody and claimed the lives of not only numerous soldiers but also innocent local people. Almost all men in Asuncion were killed. Of course, this fact couldn’t have failed to have a negative impact on the economy. The city suffered from a major decline. It felt like the cruel history brought the Latin American country back to the past. Copyright www.orangesmile.com
Your active city break in Asuncion. Attractions, recreation and entertainment - best places to spend your day and night here
After exploring the beautiful historic streets of Asuncion, be sure to get acquainted with the local natural attractions. The city offers many picturesque parks and gardens, a beautiful …

Open
The beginning of the 20th century once again brought war to the city. At this time, Paraguay was in a war with Bolivia. Asuncion became in the epicenter of events once again. Paraguay is still suffering from the consequences of the war, so the country has low economic growth and high poverty level. For example, even the cellular connection has appeared in the country not long ago. In the second half of the 20th century, Asuncion once again became a battlefield of the freedom movement. Alfredo Stroessner, a Paraguayan officer born in the family of immigrants from Germany, became the ruler of the country, establishing the dictatorship regime. Only a military coup could free Paraguayan cities and start a steady recovery. 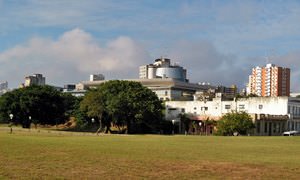 Despite its hard destiny, Asuncion managed to survive and keep its notable landmarks that invite tourists to learn more about the cultural life and history of previous centuries. The city center has a high concentration of various attractions and natural landmarks. There are many buildings in Baroque style, the design of which has distinct Italian vibes.
Shopping in Asuncion - main shopping streets, outlets and boutiques
The highest concentration of shops and malls in Asuncion is on Palma Street. Here you can visit the most modern shopping malls, designer boutiques, jewelry salons, and grocery stores full of …

Open
Do you like history? If yes, don’t forget to visit the museum that is open in the Independence House. The exhibition of Casa de la Independencia Museum features many artifacts and historical documents that tell the history of this settlement. Besides that, there is a collection of items dedicated to the colonial period, so visitors can see numerous weapons, furniture, clothing, and religious artifacts of that time. The museum’s building is a landmark itself because it is considered the oldest building in Asuncion. The name of the building, Independence House, is not random. Paraguay officially proclaimed itself an independent country in this house. 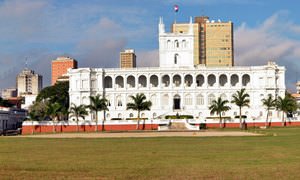 Do you want to see the beautiful residence of the country’s president and government? Then simply head to Palacio de López. The eye-catching building got its name after Carlos Lopez, the person who ordered to build the magnificent palace in 1867. When approaching the palace’s entrance, visitors can see gorgeous columns with ornamented surface. Skillfully made stuccos decorate the arches. The design of the palace is a perfect combination of elegance and luxury. French furniture, old paintings, and bronze figurines add a finishing touch to the beautiful building.
Family holidays with kids in Asuncion. How to entertain your child, things to show to children.
Family vacations in Asuncion promise to be anything but boring. Asuncion offers many interesting entertainments for travelers with children. One of the most visited places is Jardín …

Open
Do you like nature and animals? Don’t forget to visit Asuncion gardens – there are a botanical garden and a zoological garden in the capital. In 1914, German scientist Karl Freibig decided to collect exotic animals in the same place and grow unique crops. He founded the Botanical Garden and Zoo of Asunción. With time, the collection of the garden was growing and getting new flora and fauna species. Many of these new species were gifts from zoos in other cities. Nowadays, approximately seventy species of different animals live here, including birds, reptiles, and mammals. The botanical garden showcases interesting plants that visitors cannot find in other regions. 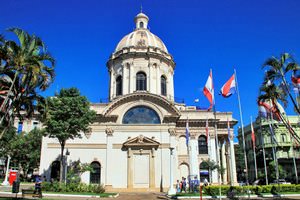 Asuncion doesn’t have a direct connection with many cities in the world, so tourists may need to change one of more flights to get to it. The airport is situated 15 kilometers from the central part of Asuncion. Tourists can get there by taxi or regular buses that connect the airport and the city. The time in transit is approximately 25 minutes by car. A bus ride will take longer, but local historical houses are worth looking at, so the ride will be entertaining.

This guide to iconic landmarks and sights of Asuncion is protected by the copyright law. You can re-publish this content with mandatory attribution: direct and active hyperlink to www.orangesmile.com.
Asuncion - guide chapters 1 2 3 4 5

Shopping streets in Asuncion
♥   Shopping area ' and Malutín streets)' Asunción, 2.9 km from the center. On the map

National and city parks around Asuncion
♥   National Park 'Laguna Blanca' , 60.7 km from the center. On the map

Sightseeing in Paraguay: things to see

If you like ruins and old constructions, don’t forget to visit Trinidad. During a walk along old streets of the town, tourists can see many interesting stone buildings, the age of which is more than several centuries. Experienced tourists recommend not hurrying and taking a stroll in Trinidad after sunset –the town looks particularly impressive at this time. The territory of Trinidad became a UNESCO World Heritage Site years ago. … Open

Search touristic sites on the map of Asuncion

Sightseeing in regions nearby Asuncion

Porto Alegre
Farroupilha Park is an astonishingly enchanting place not far from the historic city center. The park covers an area of three hundred and seventy thousand square meters. More than fifty different bronze and marble sculptures are installed here. If you visit the park in the evening, you can witness a mesmerizing scene – the fountain with colorful illumination “draws” ... Open »
Curitiba
Are you searching for a romantic place to visit? In this case, you should visit Tangua Park that is the main recreational area in the city. The opening of this park took place in 1996. There are still two old quarries that are now fully drowned. A tunnel, the length of which is forty-five meters, connects the quarries. Visitors can make a boat ride in the tunnel. Pedestrians ... Open »
Balneario Camboriu
To make a vacation in Balneario Camboriu more pleasant and entertaining for foreign guests, there is a club with striking views of the Atlantic Ocean. The inner décor of the club is reminiscent of Balinese design traditions. The club’s name, Warung, is in line with its design. In a local dialect, this word means “A house for Bali natives”. At this venue, visitors ... Open »
Florianopolis
They are sure to be pleased with a worthy choice of high-class beach hotels. Rest on the picturesque beaches remains a favorite entertainment for many travelers. The charming city locally known as Floripa appeals not only to beach holiday fans. It is ready to offer its guests a rich excursion program. The variety of historic landmarks located in the city can amaze even ... Open »
Buenos Aires
Buenos Aires is rich in various sights and places of interest, which will attract travellers of every age and taste. Visitors, who are fond of art, will be glad to attend various museums, galleries, theatres and architectural places of interest. Travellers, who cannot imagine their lives without night parties, will be pleased with fabulous clubs and discos. Fun and ... Open »
Montevideo
This beautiful city traditionally amazes its visitors by numerous architectural styles, beautiful parks and avenues, and the greatness of the River Uruguay. In order to learn more about the history of the city, you need to make a tour to its major sites. Start your observation of Montevideo from the central square called Plaza de la Constitucion. Here was founded the largest ... Open »

All about Asuncion, Paraguay - sightseeings, attractions, touristic spots, architecture, history, culture and cuisine. Prepare your trip together with OrangeSmile.com - find out the 'must see' things in Asuncion, which places to visit, which excursions to take, where the breathtaking views are waiting for you. Planning your trip with this travel guide will help your to get the most out of Asuncion in few days.