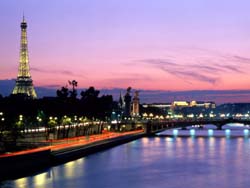 Paris is often called the city of love and it’s the best place not only for spending an unforgettable romantic holiday, but also for looking at the fantastically beautiful sights of the city. Numerous marvelous churches of various styles and epochs will shock you with its magnificence. First of all, these words concern Notre Dame de Paris.

Louvre. One of the most famous symbols of Paris is the Louvre. It’s the former royal palace, which in 1793 was turned into the world-famous museum. Its fame the museum got first of all due to the rich collection of the greatest art works, including the Mona Lisa (La Joconde) and the Venus de Milo statue. The Louvre has a great number of well-known paintings and sculptures of different epochs (till the 19th century). There takes place eastern, Greek, and Roman art. A great part of the exposition creates the Egyptian collection and the paintings by the French, Italian and Flemish artists of the 14th-19th centuries. On Visiting the Louvre and creating a full impression of what art is you’d better spend day or two. Otherwise you’ll see only a small part of the exposition and will be just overloaded with information. The Louvre is not only a museum, but a marvelous historical building and a part of the French cultural heritage.

More about Paris in our City Guide ... 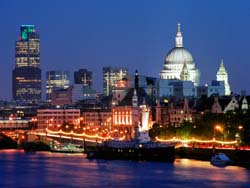 The capital of Great Britain every year is visited by millions of tourists and it’s not surprising: London is full of various places of interest, such as marvellous ancient houses, rich in collections museums, large and beautiful parks and of course the very thing that attracts so many people is that special British atmosphere. London is a very old city. In 43 B.C. the Romans founded a village on the river Thames and nowadays it has turned into a metropolis with the population of 7,5 million of people (if take into account the outskirts the number will be 12 million). The only thing that can prevent you from visiting all the challenging sights of London are traditional English pubs, for which Britain is so much famous.

Tower Bridge. Tower Bridge over the Thames is the most well-known movable bridge in the world. It may surprise you that it got its name not because of the two towers, with which it’s decorated, but due to the Tower of London that takes place nearby. Tower Bridge was built in 1894 and though the main trunk line lies through it, navigable way of travelling is more preferable. If a very large watercraft passes by, you may watch the rise of the both sides of the bridge. And the thing is that the height of opening of the bridge is equal to the size of a definite watercraft. Fully the bridge is opened only as a sign of deep respect to a person, as it was made in favour of Winston Churchill. Tower Bridge is surely one of the main sights in London. The upper part is a pedestrian zone and there one can enjoy the wonderful view on London roofs. You should also visit the museum that tells everybody about the history of Tower Bridge. The old machine room is open for visitors too.

More about London in our City Guide ... 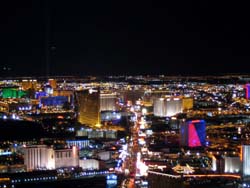 Las-Vegas is located in the centre of the desert, where in summer the temperature rises above 40oC. The city has a population of 1,2 million people and more than 36 million tourists came every year there to spend a good time. Las-Vegas can offer visitors at about 135 000 of various apartments starting with small cheap rooms and ending with accommodations sizing like a house.

Every day in Las-Vegas 150 couples get married; it’s the place, where dreams come true and where Elvis is still alive, this city becomes a part of you as soon as you step on its ground. Las-Vegas, what in Spanish means “pastures”, is situated in the 36th state of the USA – Nevada. Nevada, or as it’s also called “the silver state” can boast of the highest natality, the main part of population live in Las-Vegas. But nevertheless Las-Vegas is not at all the capital of the state, this honour belongs to Carson-City.

Bellagio Fountains. Bellagio Fountains are considered to be the best and absolutely free attraction in Las-Vegas, it strongly impresses everyone, who sees it the first time. From 15 to 24 on working days the enormous streams of water rise for 152 m and make a fantastic performance. This wonderful show is accompanied by music and the fountain acts just according the rhythm of music. On weekend the performance starts at 12 o’clock and lasts till 24 o’clock.

More about Las Vegas in our City Guide ... 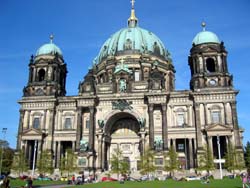 Berlin is one of the biggest cities in Europe (its population is 3,4 million of people) and along with it, it’s, perhaps, one of the most fashionable and constantly changing cities. Since 1990 Berlin is the capital of Germany, but practically it still consists of 2 parts. When The Berlin Wall fell, Berlin became one of the musical centers of Europe that is attracting more and more musicians and art workers. And when trend-restaurants and clubs appeared, Berlin got back the reputation of the most fashionable European city.

Berlin Wall. For about 30 years Berlin citizenry were divided by The Berlin Wall. It served as the boundary between the communist East and the capitalistic West. Nowadays the most part of it is pulled down, but by the clinkers in the pavement one can notice, where the Wall used to be located. On the 9th of November 1989 The Berlin Wall was ruined. In 2 years time after this symbolic event this hateful construction was practically damaged. The fragments of the Wall were sold as souvenirs. And the remains of the Wall still remind about the past. At Mühlenstraße East Side Gallery is situated. It is 1200-meter wall, which is painted by artists from all over the world. At Bernauerstrasse one can see the remains of The Berlin Wall with the holes that were made on the night from the 9th to the 10th of 1989. This is the memorial neutral place.

More about Berlin in our City Guide ...