Do you want to visit the real Africa? What about watching how great numbers of antelopes run in the savannah while lions are chasing them? Would you like to spend a day in a traditional settlement where local people still wear their national outfits and do same things as their ancestors centuries ago? If the answer is yes, it is time to visit Zambia, a country that is famous for its incredibly beautiful nature and peculiar national culture. You will also like this country if you enjoy fishing. Passionate fans of fishing from all over the world visit Zambia in order to catch a giant catfish or rare tiger fish.
Bushmen tribes lived in the territory of modern Zambia already several thousand years ago. Hunting and picking were the main occupations of these people. Aggressive Bantu tribes started settling in the region in the 11th century. They made other tribes leave and started mining copper here. The first country in the territory of modern Zambia appeared in the 18th century. At that time, it was called Barotse.
First Europeans and Arab merchants appeared in the region approximately in the same period. Large deposits of copper and a stock of ivory were like a magnet for foreigners. Great Britain took under protection a large part of the country in 1891 and called it Barotseland. With the help of Great Britain, Barotseland got new mines and the first railroad. The country officially became a British colony in 1924, but it became an independent country already in 1964. Copyright www.orangesmile.com
Spectacular Victoria Falls is the main natural attraction that brings thousands of tourists to Zambia. The height of the waterfall is 120 meters, and its width is 2,000 meters. Tourists usually visit the Knife-edge Point to see Victoria Falls in full splendor. There are several comfortable viewing platforms that are perfect for admiring the landmark. Upscale tourists can admire the waterfall from a bird’s eye view if they choose to book an excursion in a helicopter, airplane, or paraglider.

There is an interesting archaeological region not far from Victoria Falls. Scientists discovered signs of ancient people here. There is a small museum that exhibits the most notable and precious archaeological findings.
The city of Lusaka – the capital of Zambia – is one of the youngest capitals in the world. This city appeared in 1930 on the site of a small village. Numerous art galleries and artisan workshops are the main attractions of Lusaka. There are not many historic landmarks in the city, but guests of the capital can spend days visiting different art galleries, admiring works of local masters, and shopping for interesting souvenirs. By the way, there is also a large and colorful market that is a great place to buy not only souvenirs but also exotic fruits, vegetables, and fresh fish.

Livingstone is a colonial city founded by the British at the edge of the 19th and 20th centuries. It is rich in interesting buildings and historic attractions. Consider visiting a railway museum, the exhibition of which is dedicated to an important event for Zambia – the building of the first railroad in the country. There is also a no less interesting National Museum famous for its collection of unique archaeological findings. In this museum, visitors can see the skull of a Neanderthal human. Scientists think that the age of this skull is 100,000 years. Zambia is not deprived of fabulous resorts, and Siavonga is one of them. This town lies on the shore of Lake Kariba. Local people come here to swim, and fishermen love this lake because of rare fish species that live in it. Tourists, who visit this resort for the first time, are better to hire a local guide. This is particularly true about vacationers who plan to visit unpopulated areas near the lake because there can be crocodiles.
Do you want to visit unique archaeological regions? In this case, Chirundu Fossil Forest is a must-see destination. Ancient people lived in this area during the Stone Age. It is also possible to see ancient fossils and petrified trees, the age of which is more than 150 million years, as well as other unique artifacts.

British Airways has regular flights to Zambia from London. It is also possible to fly to the capital city from Amsterdam using KLM Royal Dutch Airlines. Zambia has railway connection with neighbor Tanzania – there are several trains a week that pass such cities as Kapiri Mposhi and Dar es Salaam. The length of a train ride is roughly 42 – 45 hours. The majority of neighboring countries (Malawi, Tanzania, Zimbabwe, Botswana, Namibia, Mozambique, Congo, and Angola) have bus connection with Zambia. Of course, it is possible to reach Zambia from all neighbor countries by car.
This article about iconic landmarks and sights of Zambia is protected by the copyright law. You can re-use the content, but only under the condition of placement of an active link to www.orangesmile.com.

Famous and uniques places in Zambia from our review series 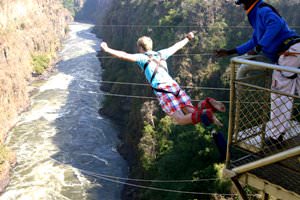 In search of the ideal place for the jump, many fans of the breathtaking entertainment visit Zambia, where the Livingstone Bridge is next to the wonderful Victoria Waterfall. From the bridge you can enjoy the panorama of the natural sights and the unforgettable jump close to the beautiful waterfall. The steel arch bridge over the Zambezi river was built in 1904. Many tourists know it under the other name - the bridge of Victoria waterfall.

Originally, the bridge, whose height is 111 meters, was used exclusively as a railway bridge. After a series of reconstructions, it was also accessible to cars and pedestrians. The bridge is surrounded by the beautiful landscapes - the lush green hills. From the bridge opens the best view of the waterfall. The experienced tourists claim that one can … Read all 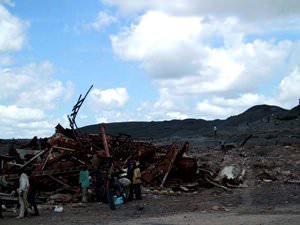 Originally the conditions for agriculture were extremely difficult in this desert area. Today, the soil in Kabwe is absolutely barren. Even when looking closely, there is no trace of grass growing on the ground on the desert hills. The ecologists … Read all
Country maps