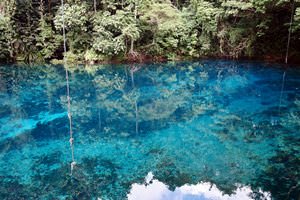 The untouched paradise of Oceania, a unique combination of different cultures and a striking diversity – the island country of Vanuatu is, indeed, one of the most inimitable countries in the world. This is a wondrous combination of authentic Melanesian traditions and elegant French culture. The period of English colonization has also left its trace in the national culture. These picturesque islands are an ideal destination for everyone who wants to spend some time away from bustling cities and who likes exotic nature and wild beaches.
There is not much information about the early history of the islands. According to archaeological findings, the islands were already inhabited in the 13th – 11th centuries BC. A team of Portuguese explorers reached Espiritu Santo Island in 1606. However, the archipelago became forgotten soon after that. Famous French admiral and explorer Louis-Antoine de Bougainville visited the islands in 1768.
Six years later, the archipelago got the name - New Hebrides. This is how famous explorer James Cook called it. Settlers from the United Kingdom and France started appearing on the islands at the beginning of the 19th century. Large sandalwood forests and spacious areas perfect for cotton and coffee plantations were like a magnet for foreigners. The issue of dividing the islands between the two countries quickly turned into a long conflict. France and the UK couldn’t divide the territory so it was decided to make the archipelago an Anglo-French condominium in 1906 and manage it together. The islands became independent only in 1980. After this historic event, the islands changed their name to the Republic of Vanuatu. Copyright www.orangesmile.com
Every island in the archipelago has its own unique peculiarities. Efate Island has the most developed tourist infrastructure. Here, tourists can relax in picturesque miniature lagoons, explore waterfalls hidden in tropical forests, try diving and other water sports. Mele Cascades is a beautiful waterfall that is recognized as the main natural landmark of the island. There are magnificent coral reefs not far from it. 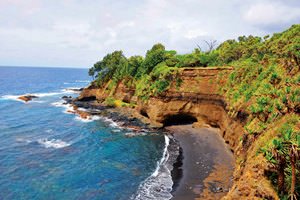 The biggest city of the islands and their capital, Port Vila, is the place where tourists will never feel bored. A cultural center was opened in the city several years ago. It exhibits artworks by local masters and craftworks by the most skilled artisans. A large part of the center is dedicated to an ethnographic and archaeological collection – there are many important archaeological sites on the islands. In the capital, there are many beautiful buildings that date back to the colonial period. Besides that, several charming markets work in Port Vila.
Do you want to see ancient sandalwood forests? Then head to Erromango Island. This island managed to keep its natural treasures through the colonization period. Not all sandalwood was cut, so the remaining forests formed a big natural park. The island’s coast is also an interesting place. Besides picturesque pristine beaches, there are many mysterious caves and beautiful waterfalls. 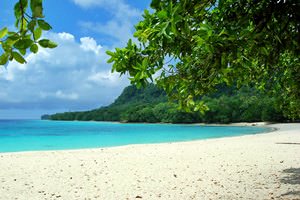 When you are in a mood to walk on the slopes of an active volcano, it is time to visit Tanna Island. Mount Yasur, an active volcano, is the main symbol of the island. It is also considered the easiest to reach active volcano in the world. The surrounding area is a unique place with multiple mineral springs, numerous waterfalls and streams. It is very interesting to combine the exploration of natural landmarks with visits to picturesque local villages. Local people still live a lifestyle that hasn’t changed much through centuries.
The tranquil island of Epi is an ideal destination for trouble-free beach recreation. It is rich in beautiful bays and beaches. Visitors can choose between gorgeous beaches with white sand and more exotic beaches with volcanic black sand. A small hotel opened on the island several years ago. Besides beach recreation and activities, tourists can attend interesting excursions to old colonial plantations and tropical forests. 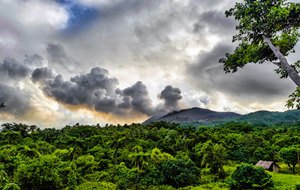 There are regular flights to Vanuatu from New Zealand and Australia. Bauerfield International Airport is the biggest airport in the country. Regular flights by Air Vanuatu connect the country with Sydney. There are also several flights a week from Brisbane. Pacific Blue is the carrier that has flights from Brisbane – as a rule, these flights are more affordable. On certain months of the year, there are also flights to Vanuatu from Fiji, New Caledonia, and the Solomon Islands. Finally, Port Vila has a modern port district that can accept large cruise ships from different countries.
This article about iconic landmarks and sights of Vanuatu is protected by the copyright law. You can re-use the content, but only under the condition of placement of an active link to www.orangesmile.com.

Famous and uniques places in Vanuatu from our review series 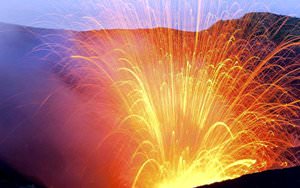 One of the most powerful and destructive volcanoes on the planet can be found on Tanna Island that is a part of New Hebrides archipelago. We are talking about Yasur volcano. It has being continuously erupting, throwing lava flows every few hours, for more than 800 years already. Thus, it’s not surprising that every year thousands of tourists come to this small island in the Pacific Ocean to watch this fantastic show. At night, the Yasur volcano looks fantastic; incredible fireworks are both fascinating and terrifying.

Height of the volcano is relatively small; it’s only 361 meters high, while the diameter of the crater is about 400 meters. Despite the great danger of Yasur volcano, it’s considered one of the most accessible for climbing. It attracts not only curious tourists, but … Read all
Country maps 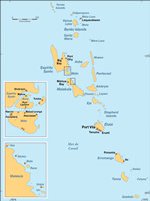