It is believed that the animal world in Uganda is the most diverse in Africa. Many tourists visit this country with only one aim – to watch wild animals in their natural habitat. Besides natural landmarks, tourists will find beautiful old villages, interesting archaeological sites, and historic landmarks of different epochs in Uganda. Finally, friendly local people are always glad to meet foreign tourists and tell them more about their unique culture.
Pygmies were the first settlers in the territory of modern Uganda. Nilotic tribes set up their authority over the territory in the 11th century. Descendants of these tribes founded the first country in the territory of modern Uganda in the 14th century. At that time, it was famous as Bunyoro. In the 18th century, a large feudal kingdom of Buganda replaced Bunyoro. At that time, this was one of the most powerful countries in Central Africa.
English explorer John Speke was the first European who visited the territory of modern Uganda. Together with his crew, Speke arrived in Buganda in 1862. Since that time, Christian culture has started spreading in the country. The official period of British colonization started in 1890 for the African country. Fertile lands of the country perfect for growing cotton attracted the British. First coffee bean plantations and several cotton factories appeared in the country at the beginning of the 20th century. During World War II, Uganda was still a British colony. The country became independent in 1962. Copyright www.orangesmile.com
Having arrived in the capital of Uganda, the city of Kampala, you will find yourself in a modern and dynamic city with numerous restaurants, bars, and casinos. The latter are quite popular in the country. Kampala is one of the most multinational capitals in the world. There are old Christian churches, beautiful mosques, and even Buddhist temples in the old part of the city. Consider visiting the Museum of Kampala that exhibits a large and interesting collection of archaeological and ethnographic artifacts.

Jinja is a more laidback city with a tranquil atmosphere. However, it is also not deprived of historic attractions. Numerous buildings in the Asian style have become a calling card of the city. Centuries ago, Jinja was one of the main centers of Hindu culture in Africa. Nowadays, the city attracts not only history fans but also rafting enthusiasts and everyone interested in exploring the beautiful nature of the region.
Entebbe is one of the leaders in terms of the number of museums in Uganda. In this city, tourists can visit the Museum of Geology and the Museum of Zoology that exhibits a unique collection of artifacts dedicated to local fauna. Local Botanic Garden has a collection of rare plants, and the city’s suburbs are famous for their natural beauty. Finally, there is an interesting zoo that all families enjoy visiting.

The Ssese Islands are an absolutely special region of the country. This is a group of more than 80 islands in the northwestern part of Lake Victoria. Just like many centuries ago, Bassese tribes live on this land. Their lifestyle has remained unchanged for many centuries. They grow coffee and sweet potato on the islands. There are also banana plantations. Besides agriculture, local people do fishing. Tourists can always join fishermen for a small fee and participate in the process. Shopping aficionados will also find it interesting to visit the Ssese islands because they can buy many interesting, one-of-a-kind souvenirs.
The Queen Elizabeth National Park is the main natural landmark in the country. This is the most visited national park in Uganda. Its territory is covered with exotic forests that have become home to rare species of monkeys. There are also gorgeous waterfalls with picturesque views. Tourists can visit this national park only together with local guides because there are many wild animals.

The international airport situated not far from the capital of Uganda accommodates flights from Paris, Frankfurt, London, Amsterdam, and Dubai. Besides that, it is simple to reach Kampala from Nairobi, Johannesburg, Addis Ababa, and Dar es Salaam. Uganda has free connection with Tanzania using Victoria Lake. Ferries regularly arrive in Port Bell from Bukoba. Buses connect Kampala with Kenya (Nairobi), Tanzania (Dar es Salaam), and Rwanda (Kigali). It is also possible to reach different cities of Uganda from neighboring countries (Tanzania, Kenya, Rwanda, Sudan, and Zaire) by car.
This article about iconic landmarks and sights of Uganda is protected by the copyright law. You can re-use the content, but only under the condition of placement of an active link to www.orangesmile.com.

Famous and uniques places in Uganda from our review series 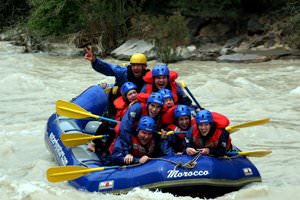 In search of good rafting routes in Africa you can go to Uganda, the White Nile. The source of the rushing river is Lake Victoria. The river flows through a series of intricate sleepers and forms several wonderfully beautiful waterfalls. Each year, thousands of tourists come to hot Africa to drive past the White Nile, the rock faces, and practice their forces on the numerous sleepers.

The diversion into the recreation can bring the excursion to one of the numerous tiny villages that are located on the riverside. The view of the local inhabitants culture will also give a lot of the unforgettable impressions. The length of the river is quite impressive and forms about 957 km. Along the length of the river there are the excellent places for rafting.

Athletes arriving at the White Nile … Read all
Country maps 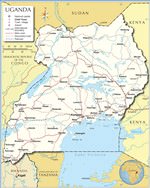