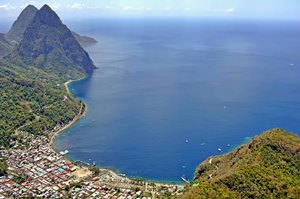 Do you like prestigious beach resorts with high-class hotels, spa salons, and restaurants? Do you like scuba diving or have always dreamt to try it or other water sports? If the answer is yes, then the island country of Saint Lucia in the Caribbean is the ideal destination for the next vacation. Local resorts are widely recognized as some of the most expensive and luxurious in the world. No wonder why many celebrities choose Saint Lucia for their vacations.
Christopher Columbus was the discoverer of the island. He first stepped on its coast on December 13, 1502. Spain celebrates an important holiday on this day – the Day of Saint Lucia. This is the reason why the island got its current name. In the medieval period, indigenous Indian tribes inhabited the island. They were not happy to see Europeans, so all attempts to build settlements ended up miserably.
In the middle of the 17th century, the French could conclude a peace treaty with indigenous tribes. This is when first European settlements appeared on Saint Lucia. Slaves delivered from African countries worked at sugarcane plantations. For many years, France and Great Britain argued over this land. In total, the ownership of Saint Lucia changed 14 times between these two countries. In 1967, the island became partially independent from the United Kingdom. Saint Lucia became fully independent in 1979. Copyright www.orangesmile.com
Castries, the capital of the country, was founded by the French yet in the 18th century. Here, visitors can explore the beautiful historic quarter. It suffered from massive fires several times, but many buildings of the colonial period have survived until our days. Derek Walcott Square is the heart of the historic quarter. There are several beautiful buildings nearby and an old Saman tree, the age of which is approximately 400 years. There is a big and colorful market in Castries where visitors can always buy exotic fruits, interesting souvenirs, and artworks created by local artisans. 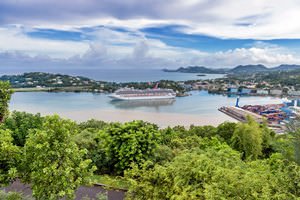 The Folk Research Centre (Plas Wichès Foklò) is the most visited cultural center in Saint Lucia. Here, visitors can get acquainted with fabulous Creole culture. This museum is open in a beautiful building of the colonial period. It exhibits a rich collection of artworks and crafts, old music instruments, and household items. There is even a small library that frequently hosts temporary exhibitions of local masters.
Do you dream of an excellent beach vacation and spa treatments? Then you should visit the northern coast of the island that is often called “the Golden Mile”. This is a continuous chain of numerous small resorts where tourists will easily find luxurious hotels and charming beaches. The Golden Mile has the highest concentration of different tourist objects on Saint Lucia, including hotels, sports centers, dozens of restaurants, various shops, and entertainment centers. There are big resorts that never sleep and entertain their guests 24/7, as well as small and tranquil resorts perfect for deep relaxation. 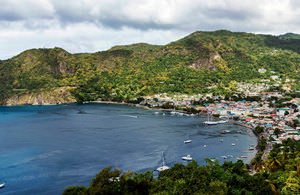 Pigeon Island is an interesting natural attraction that is clearly visible from popular Reduit Beach. This is a small island that was artificially joined to Saint Lucia by a causeway made from dirt. Nowadays, the Pigeon Island National Park occupies almost a complete territory of the island. In the 18th century, British colonizers built a protective building on this island. Years later, the fort lost its importance and was abandoned. Nowadays, there is a wonderful recreational park on the island where visitors can admire beautiful local nature and explore the surviving historical buildings.
West coast is a great destination for all travelers wishing to explore beautiful tropical forests. There are also wonderful beaches and high-class resorts here, but gorgeous tropical forests remain the main treasure of this part of the island. There are several hiking trails that many tourists will find interesting to explore. West coast is also an attractive destination for divers because there are magnificent coral reefs not far from the coast. 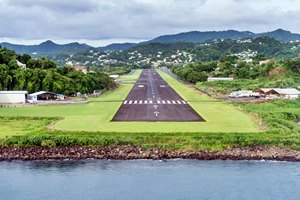 Heawanorra International Airport is located in the southern part of the island. It regularly accepts flights from different cities of Europe and the United States. Flights from London are among the most frequent to Saint Lucia. As a rule, British Airways is the carrier of these flights. Saint Lucia has air connection with many island countries in the Caribbean. There are regular flights from Grenada, Barbados, Trinidad, Puerto Rico, and Martinique. The United States has regular flights to Saint Lucia from Huston, New York, San Francisco, and Miami. The island’s port frequently welcomes cruise ships by the Royal Caribbean International that depart from Puerto Rico.
This article about iconic landmarks and sights of Saint Lucia is protected by the copyright law. You can re-use the content, but only under the condition of placement of an active link to www.orangesmile.com. 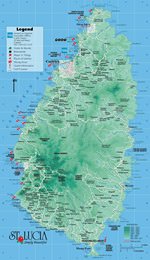 Castries
The city of Castries was founded by the French. This important event took place in 1650. However, the United Kingdom established its authority in the region in 1814. In 1979, an incredibly important event happened here. Castries has finally become independent. Thanks to the new status, the city became the capital of Saint Lucia. The city started developing actively. Thanks to the generous nature of the region, Castries started exporting bananas, sugar extracted from sugarcane, lemons, … Read more