Sightseeing in Port-au-Prince - what to see. Complete travel guide 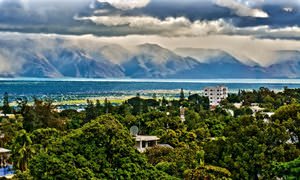 The capital and the biggest city in Haiti – Port-au-Prince – comfortably lies on the bay that is a part of the Gulf of Gonave. Gorgeous local culture and the unique colonial architecture have always attracted foreign guests in search of exotic places where it is possible not only to relax but also to learn something new when exploring local attractions. Do you like making discoveries and learning something new? The voodoo cult is still alive in Port-au-Prince – this religion is exotic to most foreigners. Without a doubt, it would be a mistake to forget to mention the Caribbean Sea that amazes everyone with its cleanness and miraculous underwater world.
In 1706, a ship named Le Prince reached the Gulf of Gonave. The captain decided to call the bay after his ship and called it Port-au-Prince. The first port opened in the area in 1748. Before the arrival of foreigners, only the indigenous tribes lived here but the colonizers mercilessly killed them all. After that, the foreign invaders brought slaves from Africa to the settlement. The slaves had to work day and night mining gold. African men and women who were not strong enough to work in the mine were taken to the numerous plantations.
In 1770, Port-au-Prince became a part of the colony of Saint-Domingue. Twenty-one years later, the black population of the settlement attacked white plantation owners and rebelled against colonizers. The French were banished from the island. In 1804, Port-au-Prince became the capital of the independent country of Haiti. The American troops occupied Haiti during World War II. They built a military base and a warehouse on the island. During the period when Duvalier was the president of the country, the economy of Haiti was declining. The country tried to struggle with an ongoing recession. Copyright www.orangesmile.com
Are you a fan of beach recreation? It is hard to find a clean and comfortable place for sunbathing in Port-au-Prince. As a rule, tourists visit this city to look at the architectural heritage and other landmarks of the capital of Haiti. The neighborhood settlements are more suitable for beach recreation. Tourists can sunbathe, swim, and dive there. The underwater world of the region is definitely worth exploring. Numerous coral reefs and various sea creatures create true underwater kingdoms that so many vacationers want to see with their own eyes. Local beaches are covered with soft white sand. As the sea is shallow near the coast, parents can let their children swim. 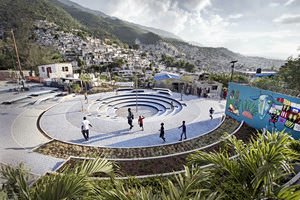 The Cathedral of Our Lady of the Assumption or simply the Port-au-Prince Cathedral is the main shrine in the capital. Originally, there was a wooden church on the site of the cathedral. Built in 1770, this church resembled a small warehouse. Its roof was covered with cement slate, and the bell was placed in the garret. As no one was taking care of the church, local authorities decided to close it. The old church was completely destroyed during the rebellion. When the uprising was over, the city’s bishop started restoring the sacred building.
As the church was in ruins, it was decided to build a new cathedral on its site. The construction works started in 1884. It took several decades to complete the cathedral because of the absence of funding and the change of bishops. According to the project, the cathedral was intended as a monolithic building, so only the finest materials were suitable. Quality concrete and artificial stones were to be used for decoration purposes. However, earthquakes are not rare in Port-au-Prince. Because of this, builders decided to change the project and make their choice in favor of the reinforced concrete that was an innovative material at that time. This type of concrete was durable enough for the seismic zone. The cathedral opened in 1914. 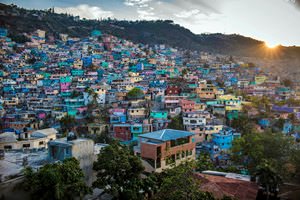 Would you like to learn more about the history of Haiti? In Port-au-Prince, vacationers can visit the national museum that exhibits thousands of interesting artifacts. This is the best place for guests of Haiti to learn about the centuries-old history of the island and its capital. The museum exhibits paintings of local artists, coins of different centuries, and different types of weapons that the rebels used to fight colonists. Curious tourists will find it interesting to examine old documents that played an important role in the development of the whole country. However, a collection of frescos is, perhaps, the most impressive part of the exhibition. These frescos tell visitors a truly cruel story about colonizers who exterminated the indigenous people and show how merciless soldiers were to African slaves.
Many European countries do not have a direct connection to Haiti. In this case, tourists usually prefer to fly to the Dominican Republic first. After that, take a flight to Haiti. It is also possible to get to Haiti from the Dominican Republic by passing the border on foot or in a rented car. There is one bus a day to Port-au-Prince but the journey time is roughly six hours. A cruise ship from the Dominican Republic to the capital of Haiti is a more comfortable way to reach the city.
This guide to iconic landmarks and sights of Port-au-Prince is protected by the copyright law. You can re-publish this content with mandatory attribution: direct and active hyperlink to www.orangesmile.com.

City tours, excursions and tickets in Port-au-Prince and surroundings

National and city parks around Port-au-Prince
♥   National Park 'Sierra de Bahoruco' , 108 km from the center. On the map

Sightseeing in Haiti: things to see

The picturesque town of Petion-Ville is typically described as one big architectural landmark. It was founded in 1831. The town is built near the coast, on a hill slide. The small facades of houses in Petion-Ville are painted in all colors of the rainbow. When walking on the streets of the town, you will hardly find two houses that look the same. Besides unique architecture, the colorful town is famous for its numerous national cuisine restaurants and loud entertainment venues. … Open

Christmas is traditionally one of the best times to visit Europe because the festive period is famous for its unforgettable charm and magic. Despite COVID regulations, European capitals start holiday markdowns and roll out Christmas markets. Vilnius, the capital of Lithuania, is no exception. The city has held the ceremony of lighting the main Christmas tree in the Cathedral Square.

Search touristic sites on the map of Port-au-Prince

Sightseeing in regions nearby Port-au-Prince

Cap-Haitien
It is possible to get to Cap-Haitien from many large cities in the world. The Haitian city has its own international airport that accommodates flights from many countries. There is one more way to reach the city – by land from the Dominican Republic. After your arrival in this country, you need to buy a bus ticket to Cap-Haitien. Mototaxi is the best way to get to the ... Open »
Santiago
The main historical monument is the monument dedicated to the Heroes of the Republic Renaissance, the lower hall of which is decorated by the artist Vela Zanetti. The upper hall of the museum has been turned into a viewing platform with stunning views of the valley and a panoramic view of the nearby mountains. Other attractions include several museums, ancient buildings, and ... Open »
Puerto Plata
If your aim is to see magnificent architectural buildings, move your feet to the Central Park. St Philip Fort, Puerto Plata Lighthouse and Cathedral of St Philip are located nearby. The top of the Isabel de Torres Mountain is the location of a huge botanical garden, which features plants from different countries. Finally, if you seek entertainments, you will find all you need ... Open »
Santo Domingo
Columbus's house is considered the first home of Santo Domingo, and the first fortress built in the New World is the fortress of Osama built to protect this place from pirates. A myriad of architectural and cultural monuments are located in the town square and parks of the city. The oldest of them are the remains of Puerta del Conde wall; the residence of the former archbishop ... Open »
La Romana
If you make a trip east from the town, you will see large farming regions that mostly grow cane. The beauty of local citrus gardens will amaze visitors of this place. The majority of hotels are located along the seaside not far away from the town. Here tourists will find comfortable guestrooms, high quality service, peaceful rest and numerous entertainments. There is Chavon ... Open »
Providenciales Island
Among the most prominent attractions of the exotic island are its extensive beaches and unique coral reefs attracting fans of beach rest from all over the world. Amazing events are regularly held there; those events are dedicated to cultural traditions of the indigenous population, so a tour there will allow diversifying the rest. Each miniature village has its amazing ... Open »

All about Port-au-Prince, Haiti - sightseeings, attractions, touristic spots, architecture, history, culture and cuisine. Prepare your trip together with OrangeSmile.com - find out the 'must see' things in Port-au-Prince, which places to visit, which excursions to take, where the breathtaking views are waiting for you. Planning your trip with this travel guide will help your to get the most out of Port-au-Prince in few days.