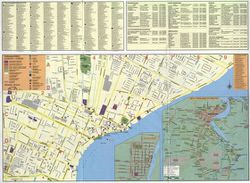 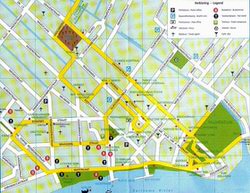 Interactive maps of hiking and biking routes around Paramaribo

1. You can zoom in/out using your mouse wheel, as well as move the map of Paramaribo with your mouse.
2. This interactive map presents two modes: 'Biking Routes' and 'Hiking Routes'. Use the '+' button on the map to switch between them.

This Paramaribo map has two modes: 'Railway Network' and 'Landscape & Rural Map'. Use the '+' button on the map to navigate.

City tours, excursions and tickets in Paramaribo and surroundings

Nature and parks of Suriname

Galibi Nature Reserve in Marowijne is famous for a huge number of turtles: olive ridley, green, leatherback, and hawksbill turtles. In order not to frighten them away, here it is very important to keep silence and take pictures without a flash. Turtle season lasts from February to August. Wia Wia Nature Reserve in Marowijne is also home to turtles and seabirds nesting in mangroves, including rare species like the scarlet ibis. Peaks conquerors must head to Kassikassima Mountain in the central part of Suriname. The mountain is perfect for climbing, and from its top, you can admire the splendor of Surinamese nature. … Open

Our guide to Paramaribo

It’s a lively and noisy city, the capital of Suriname. The culture and traditions of local residents are greatly influenced by Britain, the Netherlands, as well as by settlers from the Creole and Asian countries. It’s really hard to find such a unique combination anywhere else in the world. The old synagogues and mosques are located very close to each other. The local stores sell numerous goods from the … Open

The Mosque Keizerstraat is one of the most beautiful historical monuments not only in the city but also in the country. The very first mosque on its site was built in the first half of the 20th century. it was quite a modest wooden structure. Later it was decided to rebuild the mosque. Its large-scale reconstruction was completed in 1984. Now the magnificent mosque is famous for its sophisticated exterior and rich … Open

Maps of Tobago Island
Off the coast of the island you can find MV Maverick, a sunken car ferry, which has now become a house for many barracudas, stingrays, cobias, and turtles. From the southern side, there is Diver’s Thirst sight, which is popular among the divers. There are a few kinds of sharks there: black reef shark, a bull shark, and a nurse shark. You can also find here eagle rays and ... Open »
Maps of Bridgetown
Every day, interesting jeep safaris take place on the island. There are several main routes that cover the most beautiful natural landmarks of the region. It is also possible to see stunning landscapes of Barbados from a bird’s eye view – fans of thrilling experiences will enjoy an unusual helicopter excursion. A paddleboat cruise along the coastline promises to be a no ... Open »
Maps of Grenadines
One of the most well-known local beaches is Village Beach (or Vila Beach) which is located in Indian Bay. You can find everything you would need on any casual beach there: changing booths, loungers, sunshades, lifeguard towers, water equipment rentals, and boatmen who would be glad to give you a ride on a banana boat or water skies. Clean water of the local water area is ... Open »
Maps of Isla Margarita
You should go on a jeep safari around the island. Visit the national parks, natural attractions, and beaches of Margarita are included in the program of the one-day tour. If you are interested in golf, then stay at the Hesperia Isla Margarita hotel. The island's Golf Club belongs to this hotel. The use of the field is free for guests. You can also play golf here. However, you ... Open »
OrangeSmile.com - online travel reservation expert providing reliable car rental and hotel booking services. We feature more than 25.000 destinations with 12.000 rental offices and 200.000 hotels worldwide.
Secure Server