This small island country has a population of just 16,000 people. Until recently, the majority of tourists didn’t even know about its existence. This is a fantastic destination for everyone who has been dreaming of staying close to pristine nature. The Palau Islands can offer spacious and almost empty beaches, incredible diving, beautiful tropical forests, and magnificent culture of indigenous people.
First settlements appeared on the Palau Islands yet 3,000 years BC. Scientists think that settlers from the Philippines were first humans in this region. Generations of islanders maintained their traditional lifestyle, but everything changed in the 16th century. First Europeans – Ruy López de Villalobos and his crew – reached the islands in 1543. The discovery was soon forgotten, and Spain returned to its plans to colonize the archipelago only a century later, in 1686.
Complex coastline was one of the main reasons why the colonization of the islands was postponed. Numerous coral reefs made it very hard to reach the shore, and so dozens of ships sank near the archipelago. The Spanish made first successful contacts with local people in 1783. The period of Spanish colonization lasted until the second half of the 19th century. Spain had to sell the islands to Germany in 1899. Japan occupied the Palau Islands during World War I. Later, during World War II, the United States set up their authority over the archipelago. The Palau Islands remained a territory of the United States until 1994 – this is the year when the country became independent. Copyright www.orangesmile.com
One of the largest cities in the country, Koror was the capital of the Palau Islands until 2006. Despite losing this title, Koror is rich in interesting landmarks. Tourists are welcome to visit the National Museum of Palau and learn much interesting about the history and culture of the island country. Some items exhibited in this museum are truly unique. There are skillfully made necklaces created by local artisans from shells and the head of a giant, 5-meter-long crocodile that is one of the most precious items in the museum. There is a small aquarium in the city, as well as a dolphinarium where visitors can swim with dolphins.

The Rock Islands are the best destination for active recreation. There are many interesting trails perfect for everyone who wants to take a stroll in picturesque tropical forests. Limestone and coral uprises create a truly mesmerizing view. The Rock Islands are a popular diving destination because local coral reefs have become home to many exotic creatures.
Jellyfish Lake is an interesting natural attraction that has made the Palau Islands internationally famous. This lake surrounded by a tropical forest has one incredible peculiarity – a giant colony of small jellyfishes. These jellyfishes are absolutely safe for humans, so tourists are allowed to swim in the lake and snorkel among thousands of these creatures. The beautiful lake attracts fans of diving, snorkeling, and recording underwater videos from all over the world.

Is fishing one of your most favorite activities? In this case, don’t forget to visit charming Malakal Island that is recognized as an ideal destination for fishing. First fishing villages appeared on the island several centuries ago. Many generations of people on Malakal Island were fishermen. They are always glad to share their knowledge with guests and fish with them. Tourists can rent fishing gear and try to catch tuna or rare blue marlin. That being said, there is nothing strange in the fact that the Marine Museum is the main cultural landmark of the island.
There are not that many places on our planet that have not been explored yet. One of these areas lies on Babeldaob Island. Impenetrable tropical forests occupy a large part of the island’s territory, and humans have never entered some parts of them. Tourists like this island because of beautiful beaches that are yet not spoiled by thousands of guests. The capital of the Palau Islands, Ngerulmud, is situated in the Melekeok State of Babeldaob Island. Tourists will find interesting architectural attractions, artisan and souvenir shops in this city.

The international airport of the island country is situated not far from the capital. Flights from the capital of the Philippines, Manila, are the most frequent. Continental Airways Micronesia has flights from Manila to the Palau Islands at least twice a week. Flights from Guam are less frequent. Many experienced travelers reach the Palau Islands using charter flights that depart from Japan, South Korea, and Taiwan.
This article about iconic landmarks and sights of Palau Islands is protected by the copyright law. You can re-use the content, but only under the condition of placement of an active link to www.orangesmile.com.

Famous and uniques places in Palau Islands from our review series 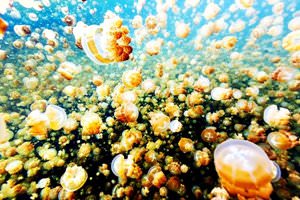 Divers are certainly recommended to visit Jellyfish Lake located in Palau. Isolated populations of the two species of jellyfish live there. The environment for them is so comfortable that the population has increased to two million individuals. Jellyfish is everywhere in the lake. Creatures live there in large quantities, and, most importantly, they are absolutely safe for people. Over the years of evolution, stinging cells at tentacles of jellyfish were completely lost, so divers can swim there without any fear to be burned.

An amazing lake is located at the eastern part of the island of Eil Malk. Its length is about 460 meters and the width is about 160 meters. As scientists believe, Jellyfish Lake appeared more than 12 000 years ago as a result of movements of the Earth's crust. Depth … Read all
Country maps 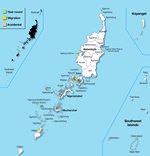