Sightseeing in Noumea - what to see. Complete travel guide 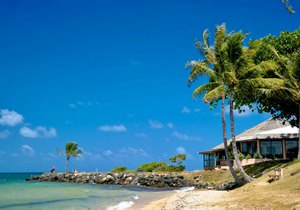 Noumea is the capital of New Caledonia and the only real city in Melanesia. This is the most picturesque settlement on the whole continent. When compared to European capitals, Noumea is definitely a lot smaller. However, the city is not deprived of its special charm and attractiveness. The cultural life in Noumea is concentrated in the city center. This is also the location of many popular landmarks that attract tourists who come to relax at the coat of the Pacific Ocean. We should also mention spectacular botanical gardens in Noumea that have become a favorite destination for many foreign guests. The diverse flora of this establishment can hardly leave anyone indifferent.
The first Europeans and their leader – British explorer James Paddon – appeared in the region close to the modern capital of New Caledonia in 1851. Paddon was the founder of the first settlement in the area. In order not to lose control over the island, the French decided to establish their settlement close to the British one. This is how one more settlement called Port-de-France appeared in the region. Later, the French changed its name to Noumea.
Initially, the French territory was nothing but a penal colony. Steadily, the area turned into a center of gold and nickel exploration. These valuable resources were mined in the vicinity of Noumea. During World War II years, there was a military camp of the United States in the city. When the war ended, the building was transformed into the headquarters of an international organization, the Secretariat of the Pacific Community. Copyright www.orangesmile.com
Baie Des Citrons is one of the most famous beaches in Noumea. It is situated on the southern side of the city. This is a tidy and well-kept coastal area with well-developed infrastructure and numerous opportunities for diverse and exciting recreation. The name of this beach translates as the “Lemon Beach”. Local people call it this way because of the yellowish golden sand. On sunny days, it looks like the beach is covered with lemons. Are you a fan of active recreation? Baie Des Citrons Beach is perfect for this pastime. 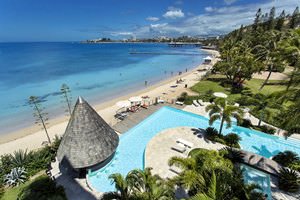 This beach in Noumea is like a magnet for fans of diving, snorkeling, windsurfing, and kite surfing. Moreover, everyone is welcome to take a mesmerizing voyage in the bay and admire the fabulous sea views. By the way, the beach is free to enter for everyone. There are many upscale and luxury hotels along the coastline, as well as elite apartments available for rent. More affordable accommodation is usually located further from the coast. Baie Des Citrons has won worldwide recognition with its prestigious hotels and high-quality service. For tourists, this is also the right place to dine or sip a cocktail in the evening because of countless restaurants and bars that are open in the area.
In Noumea, there is one more beach that is popular with tourists and locals. This is Anse Vata Beach, the length of which is roughly two kilometers. This beach also has a well-developed infrastructure and everything needed for a comfortable stay. There are many hotels, bars, and restaurants along this beach. How about purchasing a memorable souvenir? Not far from Anse Vata, tourists will easily find numerous souvenir shops and artisan workshops where vacationers can buy local jewelry, craftworks, and other souvenirs that will remind them of their vacation in Noumea. Life doesn’t stop here after sunset. Quite the opposite – numerous nightclubs and discos await their visitors and entertain all night long. 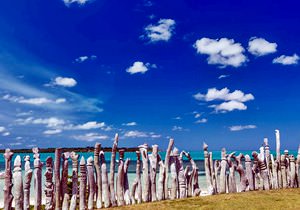 Anse Vata has white sand that is always clean. This makes the area look even more picturesque. During the storm period, which takes place in November, the sea is not calm and there are usually high waves. This is when surfers enjoy arriving in Noumea the most. For the rest of the year, the weather is always fine and the sea is calm, making the beach perfectly suitable for vacationers with small children. The sea is shallow near the coast, and the depth increases steadily, so parents can let their kids play in the water. The underwater world near Anse Vata Beach is quite picturesque, so divers can make an interesting journey to the depths of the Pacific.
If you don’t know how to dive but still want to look at the marine creatures, the city aquarium is a must-visit place. In Noumea Aquarium, visitors can see diverse marine flora and fauna from different parts of the world. Visitors can see different fish species and coral reefs in detail here. All inhabitants of the aquarium live in conditions that are reminiscent of their natural habitat. The collection of marine fauna is the biggest – approximately 300 different species live in the aquarium. 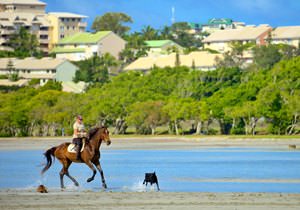 There is an international airport approximately fifty kilometers from the central part of Noumea. It receives flights from many countries of the world. Unfortunately, not all European countries have direct flights to Noumea. In this case, travelers need to make a connecting flight with a change in France. There are flights to the capital of New Caledonia from Australia and New Zealand. Air carriers departing from airports of South Korea and Japan also offer regular flights to Noumea.
This guide to iconic landmarks and sights of Noumea is protected by the copyright law. You can re-publish this content with mandatory attribution: direct and active hyperlink to www.orangesmile.com.

City tours, excursions and tickets in Noumea and surroundings

The colonial city of Noumea is the main landmark of the country. Actually, this is the only real city on the islands. It is very interesting to explore Noumea on foot because there are many old squares, picturesque streets, and interesting buildings of the colonial period. In the capital, tourists can relax at Anse Vata Beach or visit the Jean-Marie Tjibaou Cultural Centre. Besides sightseeing and visiting local museums, tourists in Noumea can explore the charming local botanic garden, zoo, and aquarium. … Open

Search touristic sites on the map of Noumea

Sightseeing in regions nearby Noumea

Mamanuca Island
Monuriki Island became very popular among tourists more recently; many fans of Tom Hanks flock there. The fact is that the island was the scene for Cast Away movie, and the main sightseeing object is a cave in which the film's protagonist lived. Nature lovers won’t be bored, as each of the islands has a huge number of hiking trails. One of the most beautiful tropical forests ... Open »
Nadi
Nadatola Beach is traditionally the most beloved place of rest for tourists. Here you can also participate in the organization of excursions to distinct villages, visit the garden of orchids, and take a ride on a boat along the coastal line, or simply rent a scuba and explore rich underwater life. The most picturesque place is the Nausori region as here you will see rich ... Open »
Kadavu Island
Kadavu will definitely impress fans of active holidays. Every beach provides excellent conditions for water sports. The most popular diving sites here are Astrolabe, Namalata, Solo and Tavuki Reefs. There are also diving sites for newcomers who can even attend one of the local diving schools. As for sea dwellers, lucky divers can see sea turtles and a blue marlin here. The ... Open »
Viti Levu Island
Holy Trinity Cathedral is the most important religious landmark of Viti Levu. This spectacular and richly decorated building makes tourists' eyes wide open and its well-developed adjacent territory is worth extra attention. Lots of amazing exotic plants grow next to the cathedral. Some of these huge trees and cactuses are more than a hundred of years old. The cathedral also has ... Open »
Yasawa
One of the most interesting sights of the island is Sawa-I-Lau grotto. It is distinguished by a very mysterious and weird atmosphere. The grotto is located in close proximity to one of the popular beaches. Going on a tour, travellers should definitely take a mask with them to appreciate the beauty of the underwater world of the cave. A lot of interesting excursions pass ... Open »
Suva
Among the main attractions of the city are, first of all, extraordinary beautiful parks and reserves. The choice of excursion routes here is truly great, so you can visit fabulous Blue Lagoon, make a walk through the national park or explore the richness of flora and fauna in the botanical gardens. Victoria Parade Street located in the downtown area is another great place for ... Open »

All about Noumea, New Caledonia - sightseeings, attractions, touristic spots, architecture, history, culture and cuisine. Prepare your trip together with OrangeSmile.com - find out the 'must see' things in Noumea, which places to visit, which excursions to take, where the breathtaking views are waiting for you. Planning your trip with this travel guide will help your to get the most out of Noumea in few days.